Composition and Antibacterial Activity of the Essential Oil from Pimenta dioica (L.) Merr. from Guatemala

Background: Lung cancer is one of the most prevalent cancers worldwide. Chemotherapy regimens, targeted against lung cancer, are considered an effective treatment; albeit with multiple fatal side effects. An alternative strategy, nowadays, is using natural products. Medicinal plants have been used, in combination with chemotherapy, to ameliorate side effects. This study aims to investigate the antitumor effect of pomegranate juice (Punica granatum) on human lung adenocarcinoma basal epithelial cells (A549), to check the effect, when combined with low dose cisplatin (CDDP), at different doses. We also have evaluated the potential protective effect of pomegranate on normal peripheral blood mononuclear cells (PBMC). Methods: Phytochemical screening of the extract was done using standard classical tests. Total phenolic and sugar contents were determined using the Folin–Ciocalteu and anthrone reagents, respectively. The antioxidant activity of pomegranate was estimated by the 2,2-diphenyl-1-picrylhydrazyl (DPPH) method. The viability of A549 cells and PBMC was evaluated using the neutral red assay. Results: Our results demonstrated that Punica granatum or pomegranate juice (with different concentrations: 150, 300, 600 µg/mL) contained high levels of flavonoids, alkaloids, tanins, lignins, terpenoids, and phenols. The DPPH method showed that pomegranate juice had a strong antioxidant scavenging activity. Neutral red showed that combining pomegranate juice with low dose CDDP (8 µg/mL) decreased the cell viability of A549 cells, by 64%, compared to treatment with CDDP or pomegranate alone. When added to low dose CDDP, pomegranate increased the viability of normal PBMC cells by 46%. Conclusions: These results demonstrated that pomegranate could potentiate the anticancer effect of low dose CDDP on human lung adenocarcinoma cells (A549 cells) and could as well decrease its toxicity on PBMC. View Full-Text
Keywords: lung cancer; Punica granatum; cisplatin; A549 cells; PBMC lung cancer; Punica granatum; cisplatin; A549 cells; PBMC
►▼ Show Figures 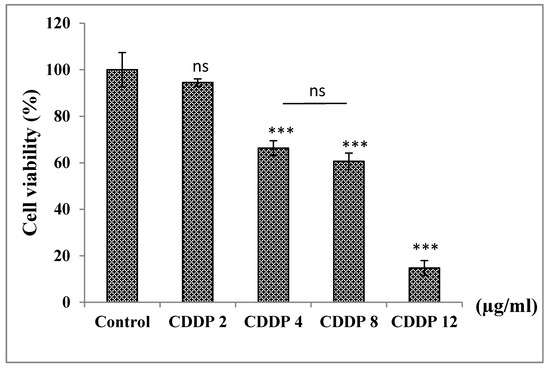