An Integrated Design Strategy for the Urban Regeneration of West Bay, Business District of Doha (State of Qatar)
Next Article in Special Issue

Recently, the development of autonomous tractors is being carried out as an alternative to solving the labor shortage problem of agricultural workers due to an aging population and low birth rate. As the level of autonomous driving technology advances, tractor manufacturers should develop technology with the safety of their customers as a top priority. In this paper, we suggest a person recognition system for the entire environment of the tractor using a four-channel camera mounted on the tractor and the NVIDIA Jetson Xavier platform. The four-channel frame synchronization and preprocessing were performed, and the methods of recognizing people in the agricultural environment were combined using the YOLO-v3 algorithm. Among the many objects provided by COCO dataset for learning the YOLO-v3 algorithm, only person objects were extracted and the network was learned. A total of 8602 image frames were collected at the LSMtron driving test field to measure the recognition performance of actual autonomous tractors. In the collected images, various postures of agricultural workers (ex. Parts of the body are obscured by crops, squatting, etc.) that may appear in the agricultural environment were required to be expressed. The person object labeling was performed manually for the collected test datasets. For this test dataset, a comparison of the person recognition performance of the standard YOLO-v3 (80 classes detect) and Our YOLO-v3 (only person detect) was performed. As a result, our system showed 88.43% precision and 86.19% recall. This was 0.71% higher precision and 2.3 fps faster than the standard YOLO-v3. This recognition performance was judged to be sufficient considering the working conditions of autonomous tractors. View Full-Text
Keywords: autonomous tractor; deep learning; object detection; YOLO-v3 autonomous tractor; deep learning; object detection; YOLO-v3
►▼ Show Figures 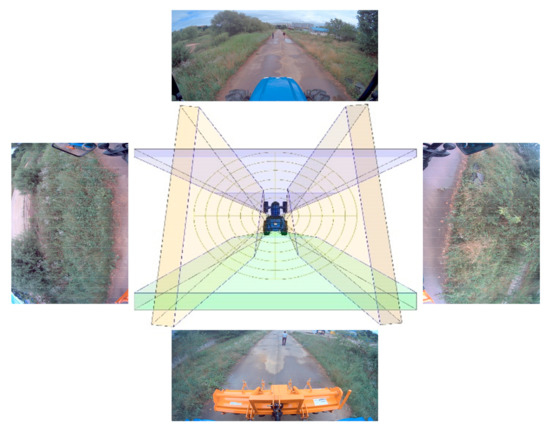