This paper investigates the effect of impeller diameter on the dynamic response of a centrifugal pump using an inverse dynamic method. For this purpose, the equations of motion of the shaft and the impeller are derived based on Timoshenko beam theory considering the impeller as a concentrated mass disk. For practical modeling, the model of Jones and Harris is added to the equation to include the effect of bearings. As a case study, the model is applied to a process pump used in an oil refinery. Computing the eigenvalues of the model and comparing them with the natural frequencies of the structure, the model updating of the problem is performed through an indirect method. Three impellers with different diameters are applied to the updated model. The results show that increasing the diameter of the pump impeller can increase the amplitude of vibration up to 52% at critical speeds of the rotor. It is found that in addition to the hydraulic condition and efficiency, the impeller diameter should be considered as an important factor in the selection of centrifugal pumps.
Keywords: rotor dynamic; bearing; centrifugal pump; impeller diameter; Lagrangian equations rotor dynamic; bearing; centrifugal pump; impeller diameter; Lagrangian equations

In this section, a mathematical model for calculating bearing stiffness is proposed by analyzing the equations in the bearing dynamic model, which is based on Jones and Harris’s efforts [14]. This mathematical model aims to give a comprehensive consideration of the nonlinear stiffness of the ball bearing, and it can be seen that the bearing stiffness is critically dependent on the preloading, g, of the rolling elements. In case of rolling element bearings, the elastic deformation takes place at both the inner raceway and the outer raceway with the rolling element. Based on the Hertzian contact theory, the relation between load F and deflection is [15]: where is the contact deformation and is a load–deformation constant for a single point contact (either at the inner or outer raceway). If the ball and raceway are made of steel, then [16,17]: where is the dimensionless contact deformation and is the curvature sum [14]. So, one can write the stiffness of the inner and outer ring contact as: where and
In the above equations, subscripts i and o represent inner and outer raceways and is the ball diameter. In addition, is the pitch diameter, and are the inner and outer ring raceway contact diameter, and and are the inner and outer raceway groove radius, respectively.
The total deformation, , at a single rolling element location is given by:
Equation (19) can be rewritten as: where
is the load–deformation constant for two point contacts of a ball with raceways.
To calculate the deformations, the conventions shown in Figure 3 are used. Considering the presence of radial clearance, the force produced by every spring in the horizontal and vertical direction can be obtained [18]: where is the radial preload between the ball and races, u and v are the displacements of the moving ring in the x and y directions, respectively, and is the angular position of the i th element.
Finally, the bearing stiffness can be simplified to [15]: where Z is the number of rolling elements.
It can be seen that the bearing stiffness is critically dependent on value of the preloading g of the rolling elements.

The model is applied for an installed pump (P-502B) in a Kermanshah oil refinery in Iran. This centrifugal pump and its impeller are shown in Figure 4.
The schematic of the shaft and impeller of the above pump is shown in Figure 5. The flowing fluid is light petroleum gases including propane and butane.
The shaft of the mentioned pump is supported by two bearings SKF7308 and SKF6307, which have been installed in distance and respectively, see Figure 1a. In addition, three impellers with different diameters have been installed at the end of the shaft.
The characteristics of shaft and impeller are shown in Table 1 and Table 2, respectively.

To obtain the stiffness of the bearing, knowledge of the properties is necessary. The general properties of these ball bearings are shown in Table 3.
It can be seen that the bearing stiffness is critically dependent on the value of preloading force for the rolling elements.
Substituting the above values in Equation (25), the values of stiffness in the x and y directions have been obtained as:
Bearing stiffness for SKF6307:
Bearing stiffness for SKF7308:
Finally, using the Equations (3), (4), (6), (7) and Lagrangian Equation (1), the mathematical equation for the case study can be expressed as:
The above equation is a lumped parameter model that can be described as:
Looking at Equation (28), one can see that the damping matrix is dependent on the angular velocity of the shaft. The stiffness matrix is implicitly dependent on the amount of amplitude of vibration and so, the equations of motion are nonlinear equations. This will lead to a complicated model. So, for simplicity, normal clearance has been considered to make the value of the stiffness coefficient independent from the deflection, and so, the equations of motion will become linear ordinary differential equations. According to the SKF General catalog, hence and used for SKF6307 and SKF7308 respectively, the equivalent stiffness for bearings in a normal clearance case have been derived as follows:
To obtain the critical speed of the rotor, the eigenvalues and thus the natural frequencies of the system must be determined. To do this, a slightly different but equivalent approach can be used to combine the pair in Equation (29). By letting and subtracting j× in the second Equation (29) from the first Equation (29), we have [19]:
Now, we can solve this equation by letting and taking the positive root to obtain backward critical speed. If we let in which is the forward critical speed, one must add the out of balance moments to the system to determine the response. Thus:
Likewise, by and subtracting j× in the second equation from the first, the rotor amplitude is calculated [19]. In addition, to determine the effect of impeller diameter, the various values of this parameter have been considered. To do this procedure, a code in MATLAB software has been written, and the following outputs shown in Figure 6, Figure 7 and Figure 8 have been derived.
The amplitudes of the rotor response plots for all pump impellers that are recommended by pump manufacture are shown in Figure 6, Figure 7 and Figure 8. The summary of the results is shown in Table 4.
So, one can see that by increasing the impeller diameter, the amplitude of vibration at critical speed will be increased up to 52%, while the value of critical speed will decrease. The value of amplitude of vibration shown in this table has been obtained without considering the structural damping of the shaft, bearings, and impeller and also the effects of fluid flow in the pump. So, in reality, these values are much smaller than the tabulated values in Table 4.

In this paper, the equations of motion for the shaft of a centrifugal pump have been derived using Lagrangian equations and based on Timoshenko beam theory and Jones and Harris [20,21] modeling for bearings based on Hertzian theory for rolling element [22,23]. By these equations, it is possible to define a lumped parameter model for the system and determine the amplitude of rotor in critical speeds [12,24]. The solutions of these equations for an applied case study show that as the impeller diameter increases, the amplitude of vibration at critical speeds increases, too. In this case study, by replacing the impeller diameter in the equations with a larger size (impeller diameter 0.256 m replaced with 0.32 m), it is shown that the amplitude is approximately increased by 52% in the critical speed. So, as the impeller trimming or impeller exchange is a general method for the maintenance in plants, it must be considered that the bigger diameter will yield more amplitude of vibration at critical speed.
It must be considered that modeling of the shaft, bearings, and impellers with details and assembling them and then conducting finite element analysis is very complex, and as the case study is a process pump in an oil refinery that works 24 h a day, stopping the production line and then measuring, modeling, and conducting FEM analysis is very expensive. On the other hand, the purpose of this manuscript is to introduce an analytical model for all the essential rotary parts of a centrifugal pump in detail and then conduct a sensitive analysis for the effect of impeller diameter on the critical speed of it inversely. For this purpose, the dynamic inverse solution is very suitable when there are practical limitations for FEM analysis, such as it being very complex and expensive.

Investigation, A.S., M.K. and M.S.; Methodology, A.S. and S.S. All authors have read and agreed to the published version of the manuscript. 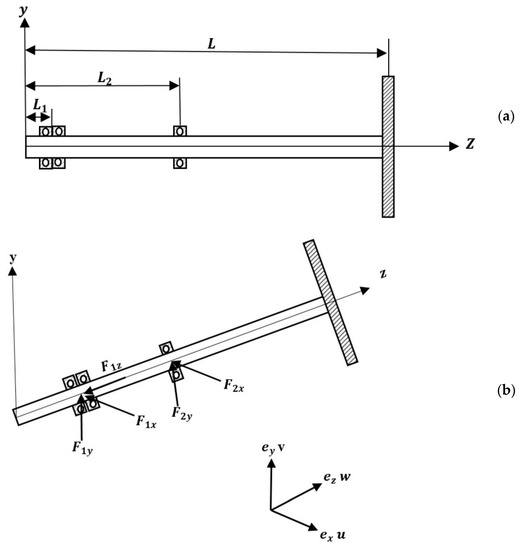 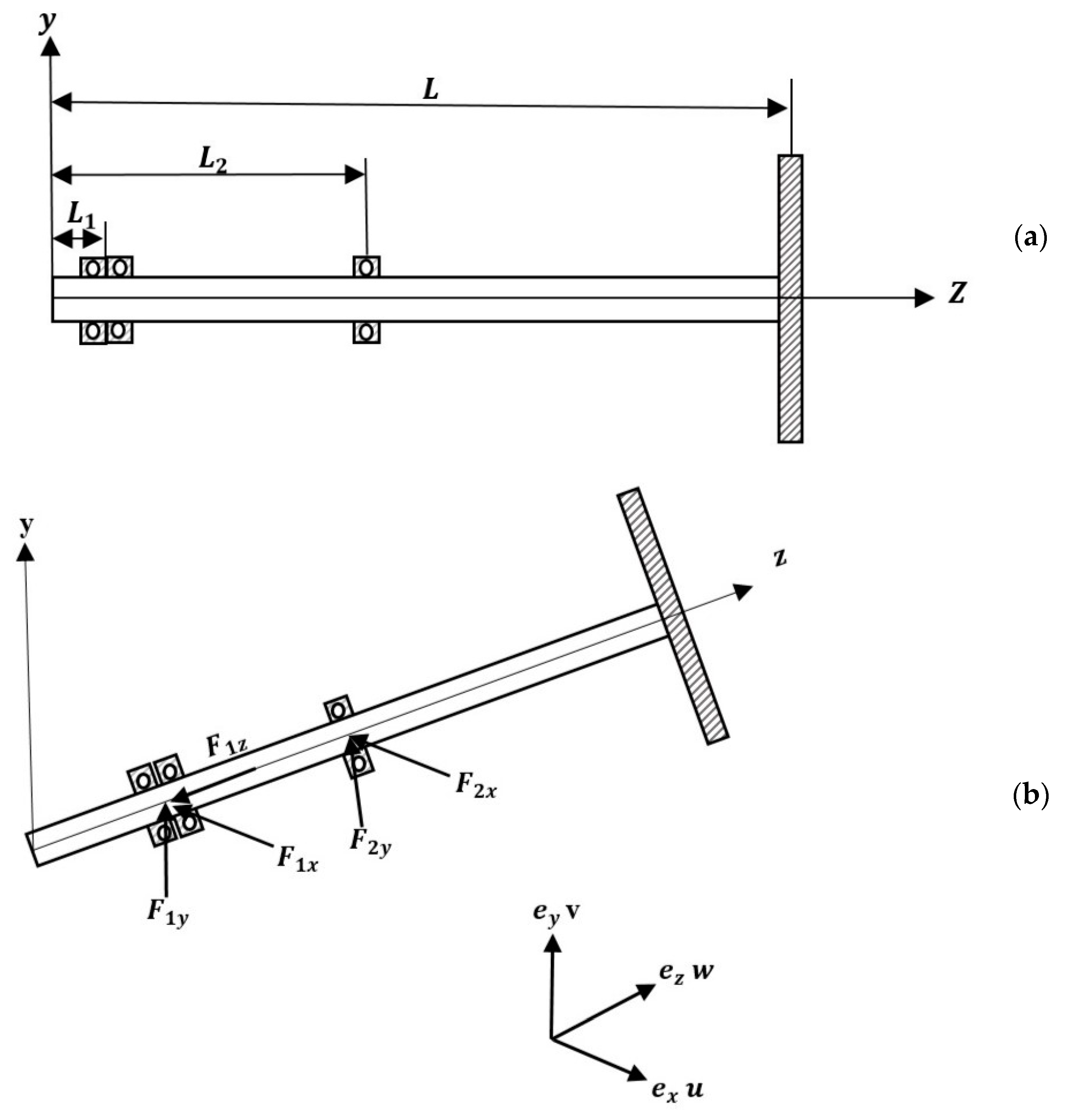 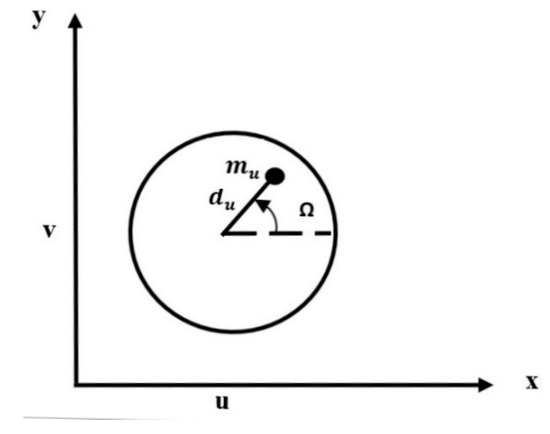 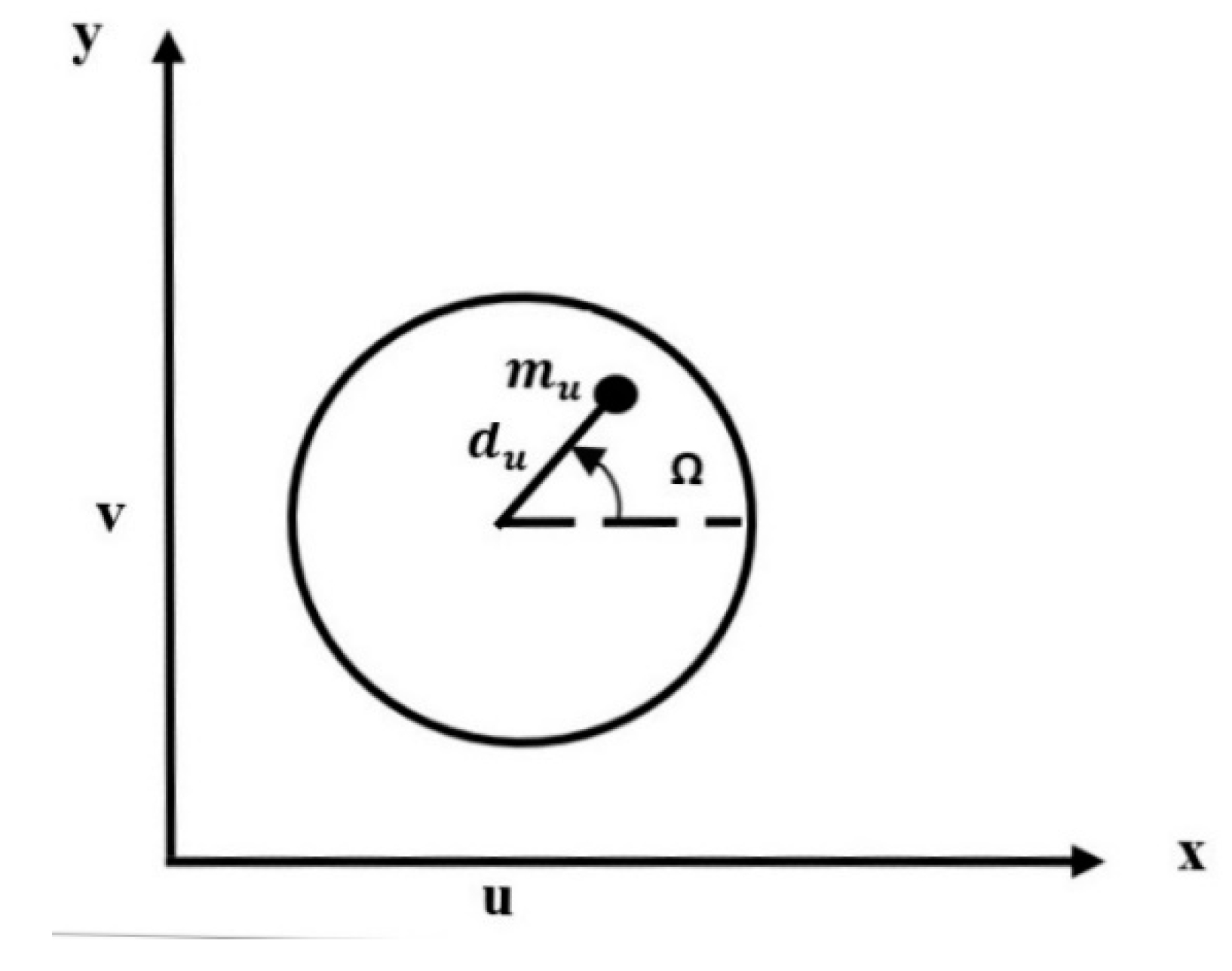 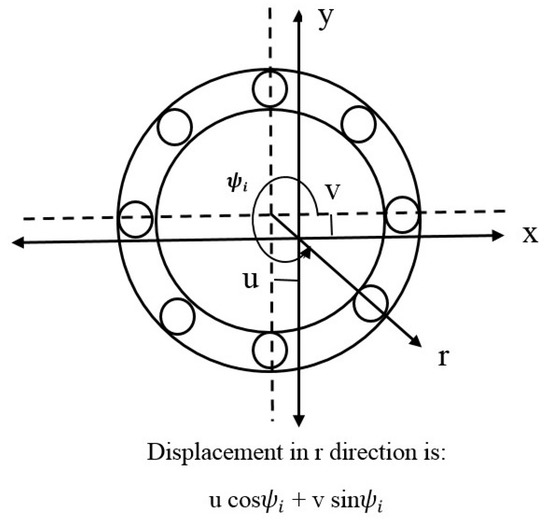 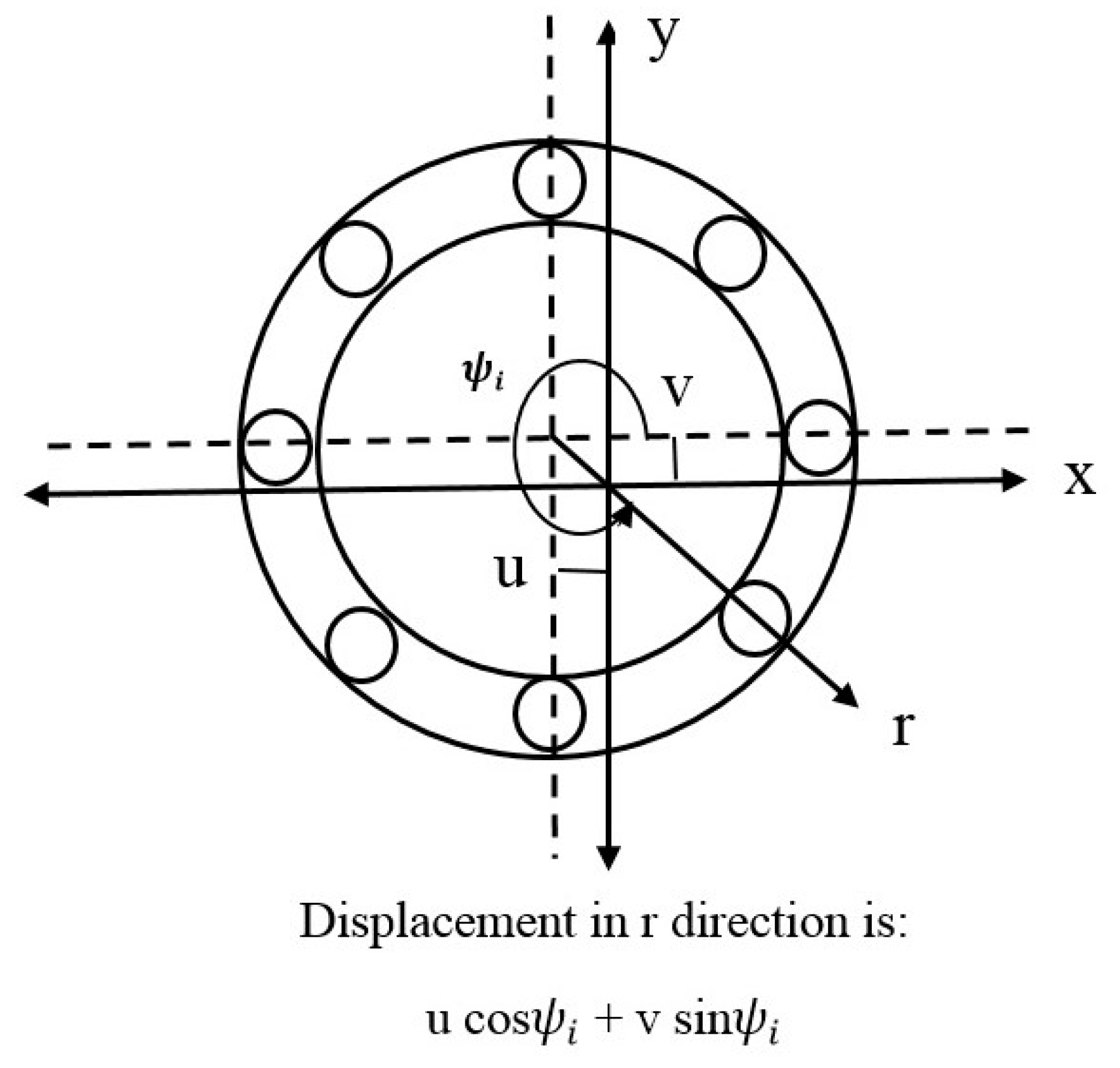 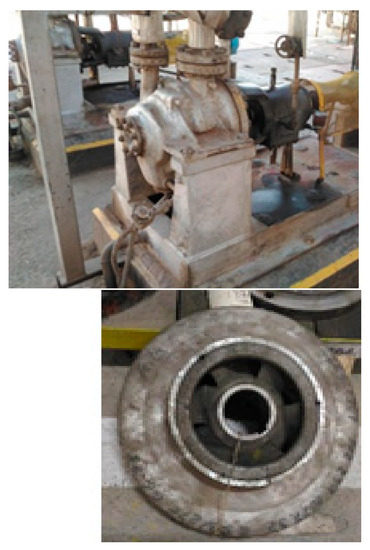 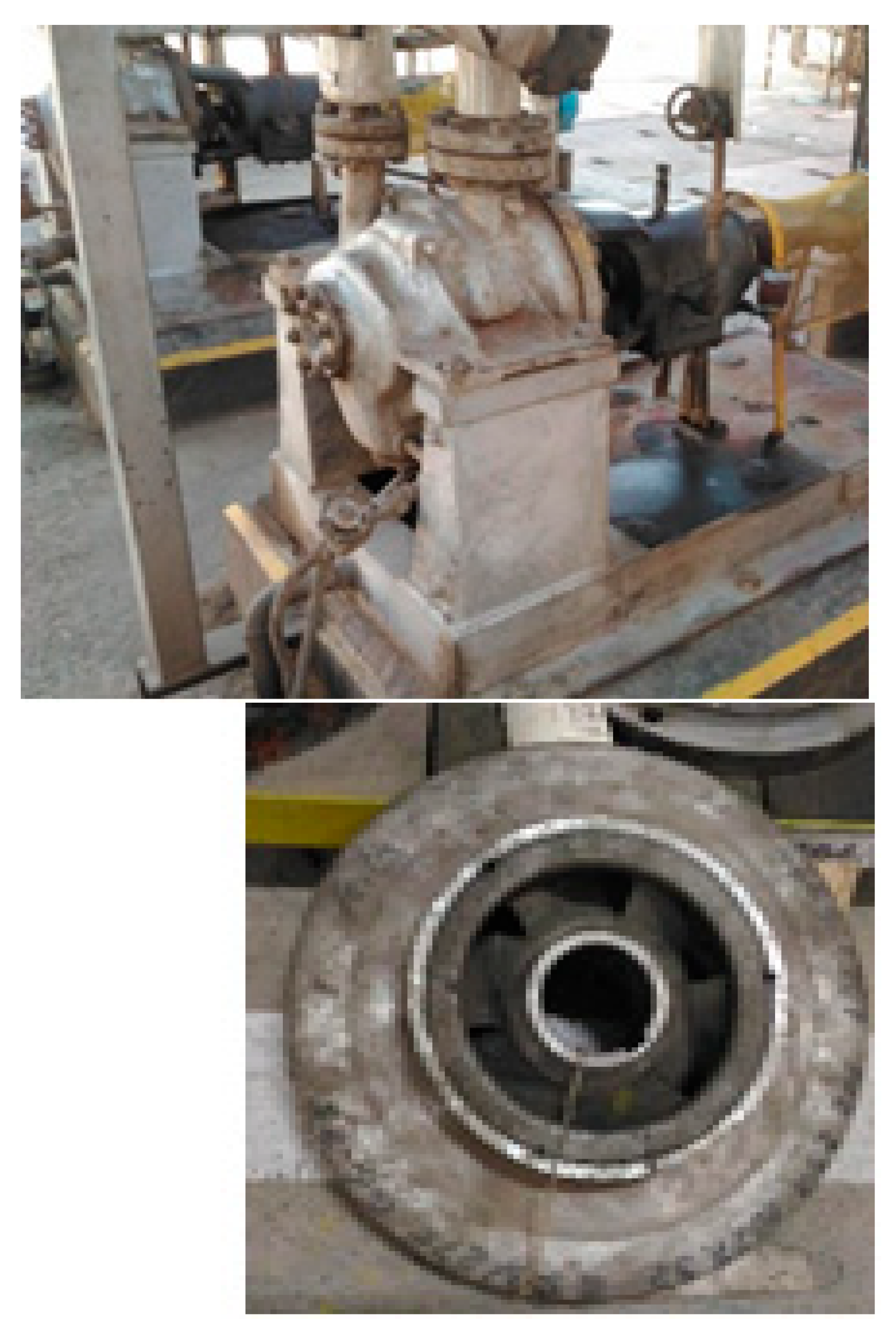 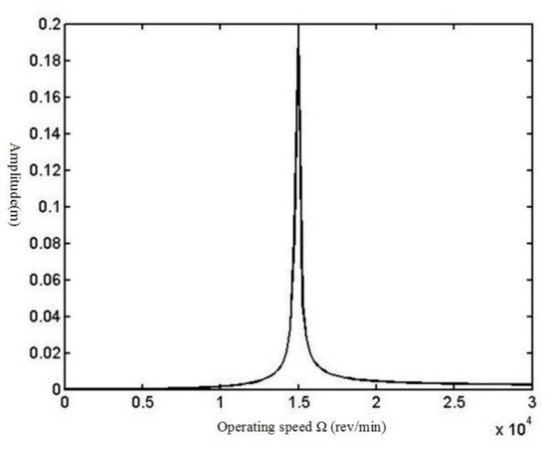 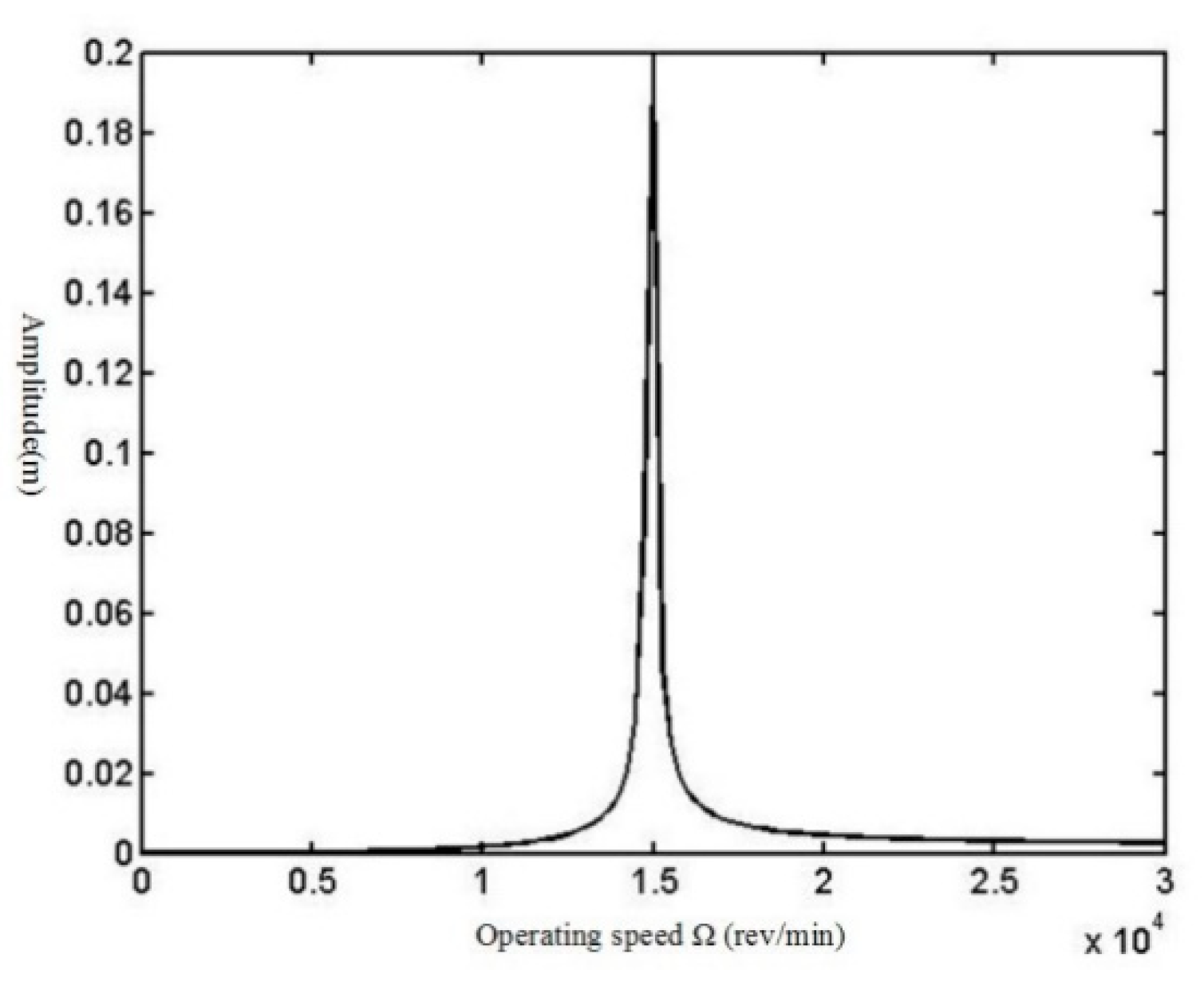 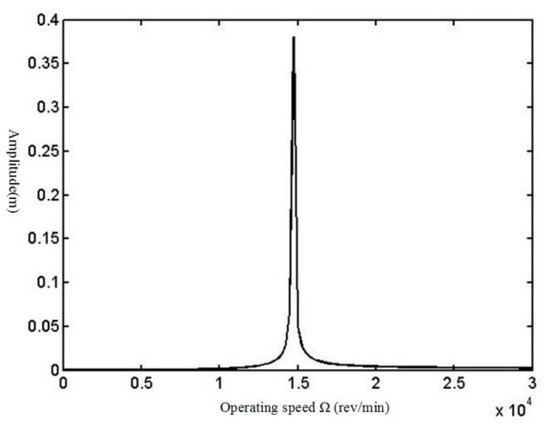 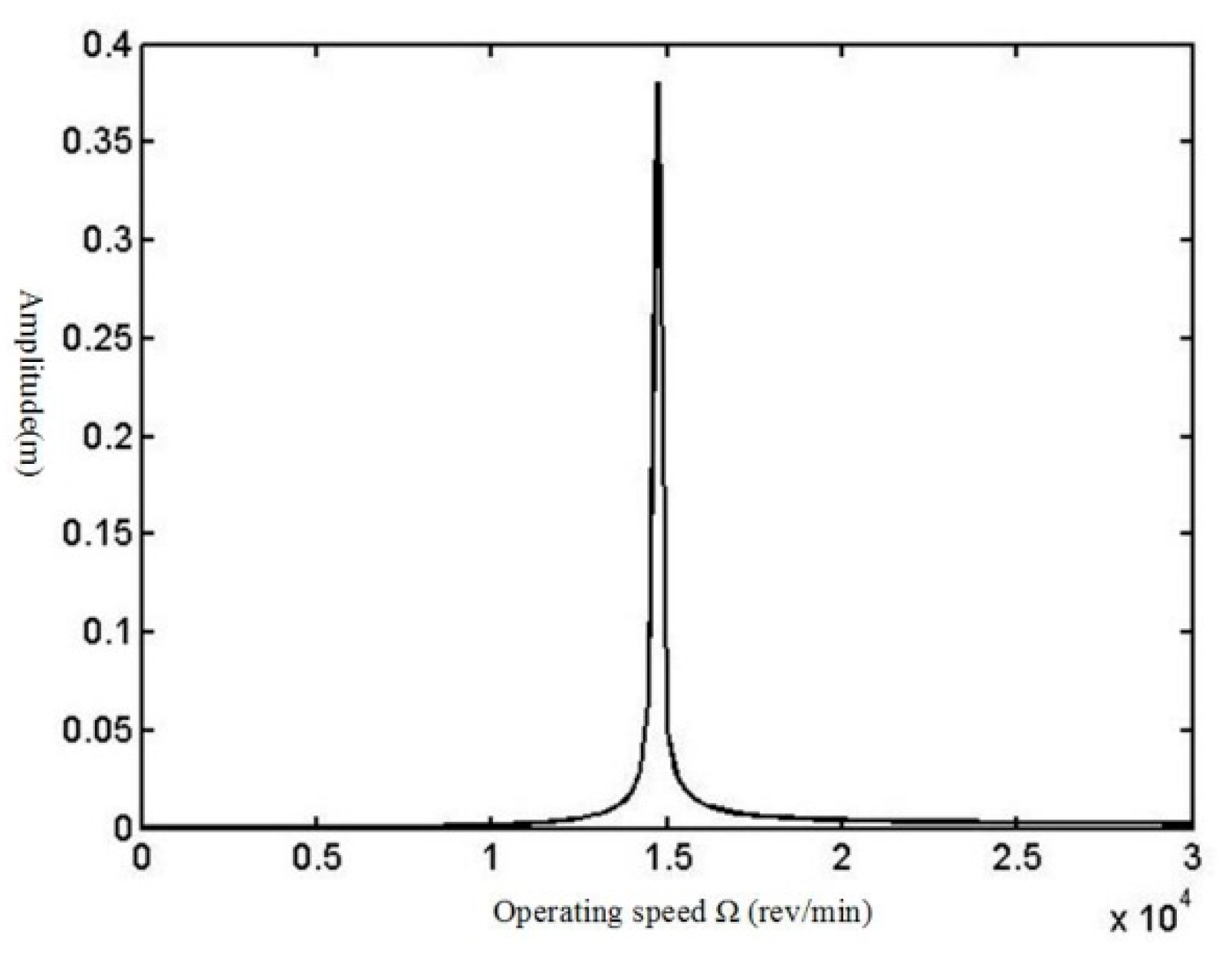 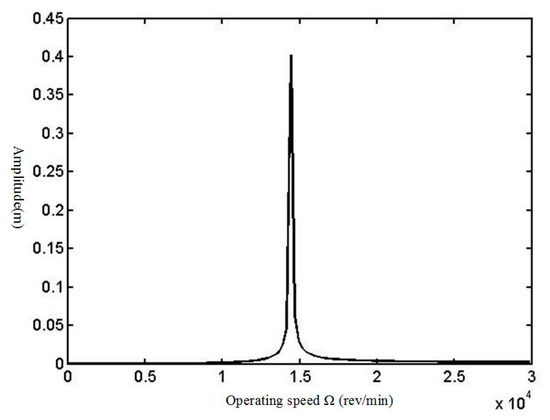 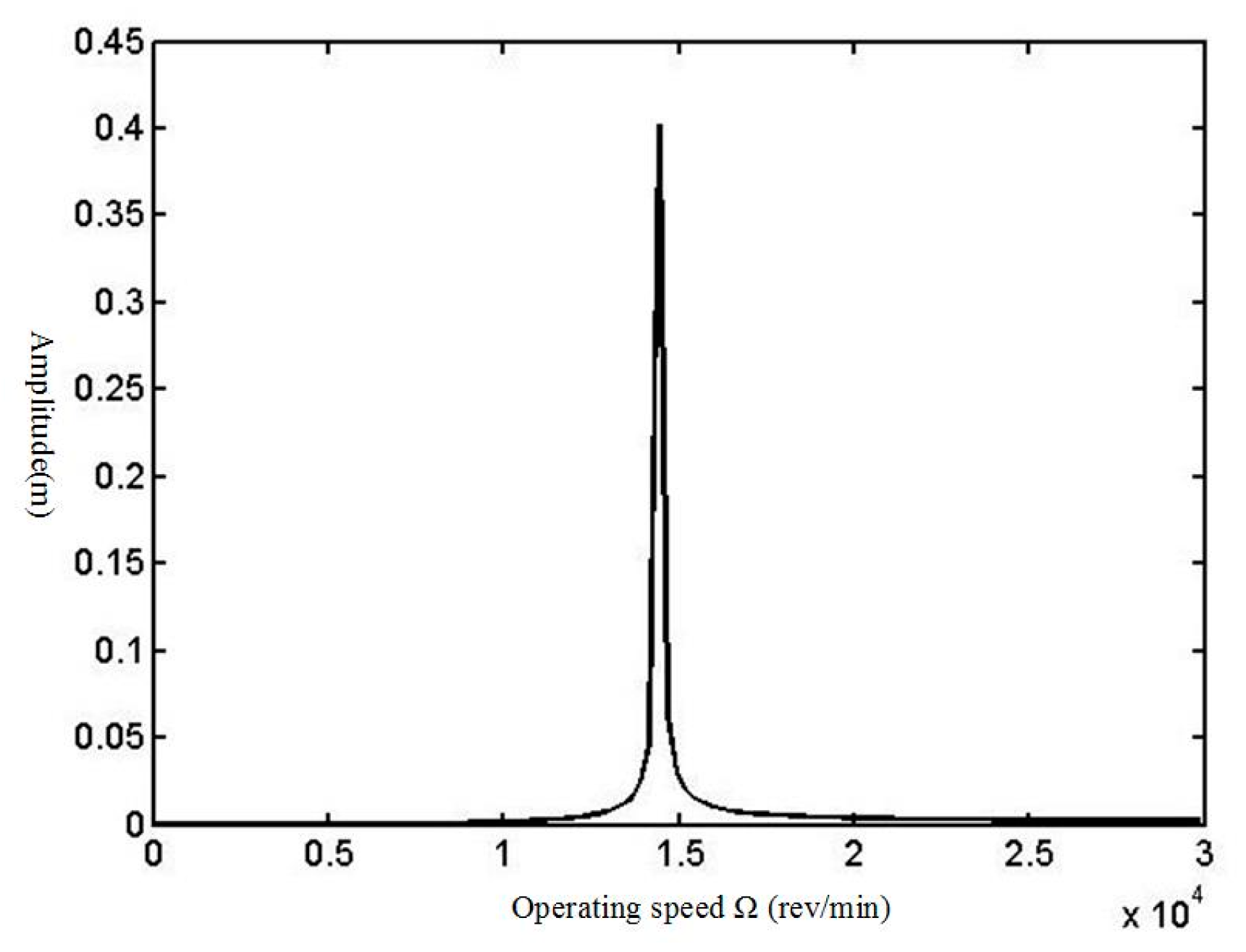