Archaeology, The Academy, and Women: Finding One’s Own Path
Next Article in Special Issue

Archaeometallurgical Analyses on Two Renaissance Swords from the “Luigi Marzoli” Museum in Brescia: Manufacturing and Provenance

Miniaturized bronze flasks represent a small portion of a wide metallurgical production that flourished in Sardinia (Italy) between the Final Bronze Age (FBA) and the Early Iron Age (EIA). They replicate a well-known and symbolic type of object, the pilgrims’ flask, common in all Europe and Mediterranean basin, and have but few archaeological parallels. For these reasons, their characterization can be considered important from an archaeological perspective. Three flasks, preserved at the Antiquarium Arborense museum (Oristano), were analyzed by X-Ray Fluorescence Spectroscopy (XRF) and Raman spectroscopy, integrated by multispectral images. The samples, coming from illegal excavations, posed two problems: establishing their authenticity and investigating the alloy composition of such particular objects. All specimens presented a widespread degradation in the outer surface: XRF and Raman spectroscopy indicated the presence of copper oxides, calcium and copper carbonates deposits. The abscence of Zn, a clear marker of forgeries, was not detected by XRF. In two of the flasks, an unusual Sn content above 20%, was detected. For FBA and EIA, especially regarding southern Europe, Sn was extremely rare, and was possibly used with caution. Further results are presented herein. View Full-Text
Keywords: Sardinia; miniature bronze objects; pilgrim flask; XRF; Monte Carlo; Raman Sardinia; miniature bronze objects; pilgrim flask; XRF; Monte Carlo; Raman
►▼ Show Figures 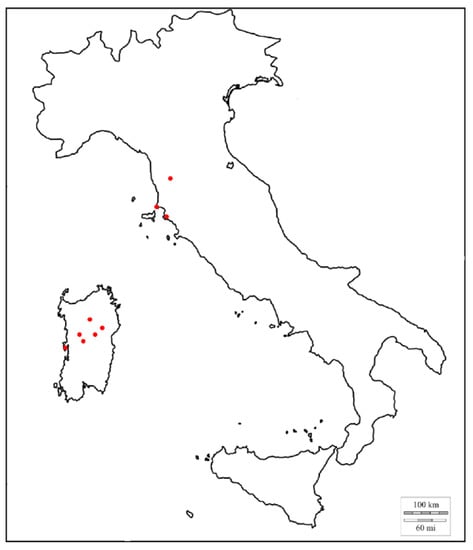