Care for Women with Delusional Disorder: Towards a Specialized Approach
Previous Article in Journal

The Role of Vaccination and Screening in Limiting the Worldwide Disease Burden of Preventable Female Cancers: A Review

Clinically, infertility is defined as the inability to conceive after a certain period. In contrast, sterility is defined as the inability to produce a biological child; however, this is not a practical definition that can be applied in a clinical setting to a patient’s diagnosis. Unlike infertility, sterility is rarely discussed in biomedical and clinical literature and is often used synonymously with infertility. Infertility affects about 10% of couples globally, but the prevalence of sterility remains unknown. We divide sterility into three subtypes natural, clinical, and hardship. To estimate sterility prevalence, we analyzed primary literature and meta-analysis papers on the rates of live births and pregnancies throughout several treatments of infertile couples (e.g., untreated patients, in vitro fertilization-treated, and patients administered other treatments). This analysis indicates that all treatments fail in delivering a biological child to most couples, suggesting that most infertile couples may fail to conceive. More comprehensive primary studies are needed to provide a precise estimate of sterility. Furthermore, research is needed to study the causes of sterility, as well as develop methods for diagnosis and treatment that are financially affordable and emotionally tolerable. Altogether, sterility is an under-discussed condition that is more common than expected, as many infertile couples are unable to conceive and are, in effect, sterile. View Full-Text
Keywords: sterility; sterility prevalence; reproductive futility; infertility; gynecology; andrology; childlessness sterility; sterility prevalence; reproductive futility; infertility; gynecology; andrology; childlessness
►▼ Show Figures 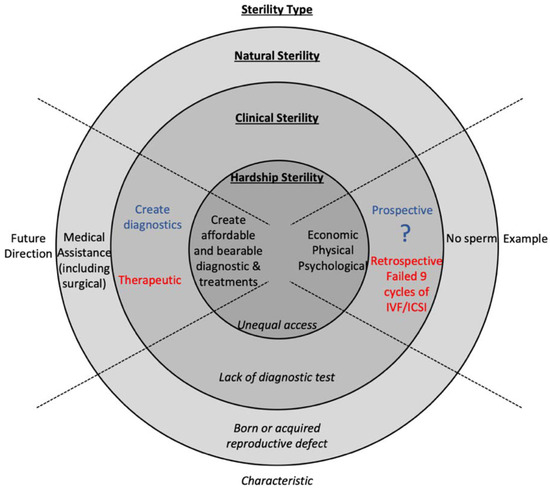