Influence of Terpene Type on the Release from an O/W Nanoemulsion: Experimental and Theoretical Studies

To provide further insight into the antioxidant potential of procyanidins (PCs) from cocoa beans, PC extract was fractionated by several methodologies, including solid phase extraction, Sephadex LH-20 gel permeation, and preparative HPLC using C18 and diol stationary phases. All the isolated fractions were analyzed by UHPLC-QTOF-MS to determine their relative composition. According to our results, classical techniques allowed good separation of alkaloids, catechins, dimers, and trimers, but were inefficient for oligomeric PCs. Preparative C18-HPLC method allowed the attainment of high relative composition of fractions enriched with alkaloids, catechins, and PCs with degree of polymerization (DP) < 4. However, the best results were obtained by preparative diol-HPLC, providing a separation according to the increasing DP. According to the mass spectrometry fragmentation pattern, the nine isolated fractions (Fractions II–X) consisted of exclusively individual PCs and their corresponding isomers (same DP). In summary, an efficient, robust, and fast method using a preparative diol column for the isolation of PCs is proposed. Regarding DPPH• and ABTS•+ scavenging activity, it increases according to the DP; therefore, the highest activity was for cocoa extract > PCs > monomers. Thereby, cocoa procyanidins might be of interest to be used as alternative antioxidants. View Full-Text
Keywords: cocoa polyphenolic extract; procyanidins; fractionation; preparative separation; antioxidant activity cocoa polyphenolic extract; procyanidins; fractionation; preparative separation; antioxidant activity
►▼ Show Figures 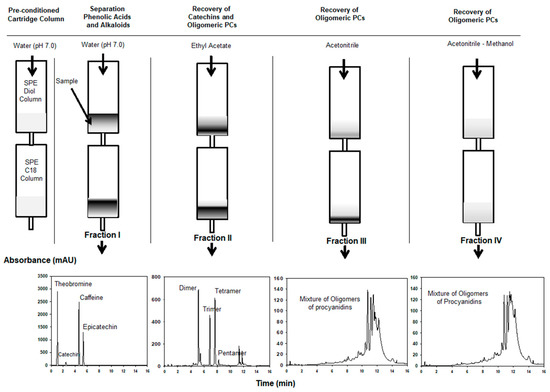