Joint contracture of the elbow is a common secondary complication caused by prolonged immobility of the joint following treatment or injury. It results in an approximate 10%–15% reduction in joint motion and therefore usually requires revision surgery [1,2]. The elbow joint capsule controls the functional range of motion of the joint and is the site that frequently develops contracture [3,4]. Some nonsurgical treatments have been examined for their efficacy in preventing joint contractures [5–8]. While these treatments have achieved a certain level of success, joint contractures generally remain an unsolved problem. Therefore, there is still a need to develop a new strategy for the treatment of joint contractures.
RNA interference (RNAi) is the process by which double-stranded RNA triggers the destruction of mRNAs sharing the same sequence. It is initiated by small interfering RNAs (siRNAs), comprising short duplexes of 19–23-nucleotide single-stranded RNAs that direct the degradation of the target RNA [9–11]. Based on their significant and long-lasting inhibitory effects, siRNAs have proven to be of great value in the treatment of many joint diseases, including osteoarthritis, rheumatoid arthritis and periprosthetic osteolysis [12–14]. Previously, we showed that the local delivery of extracellular signal-regulated kinase (ERK)2 siRNA using a lentivirus (LV) could effectively and safely ameliorate the formation of joint adhesion in a rat model [15]. This result reflected the predominant role of ERK2 in joint adhesion formation. Since joint adhesion and joint capsule fibrosis are thought to form via similar mechanisms, we hypothesized that phosphorylated ERK2 may also be increased in joint capsule fibrosis and that inhibiting the phosphorylation of ERK2 may represent a promising treatment strategy. In the present study, LV-mediated ERK2 siRNA was used to inhibit ERK2 expression and phosphorylation in a model of joint capsule fibrosis.

Ninety-six female Lewis rats with weight from 220 to 280 g, aged 12 weeks, were purchased from the Shanghai Laboratory Animal Center (Chinese Academy of Sciences). All experimental procedures were approved by the authors’ Institutional Animal Review Committee. The rats were randomly assigned to one of three groups (n = 32 each): the ORC group; CNT group, and CON group. In the ORC and CNT groups, stable post-traumatic joint contracture was created through surgical intra-articular joint injury followed by 8 weeks of immobilization, as previously described [37,38]. Rats in the CNT group were then administered with an intra-articular injection of 0.1 mL culture medium containing the LV-mediated ERK2 siRNA at days 3 and 7 post-surgery. Rats in the CON group received no surgical or pharmacological intervention.

Under inhalation anesthesia (2%–3% isoflurane and oxygen), rats were placed in the supine position and prepared for surgery under aseptic conditions. A midline skin incision was made in the right knee joint and a lateral parapatellar arthrotomy was performed. The patella was reflected medially and the knee joint flexed to expose the femoral condyles. Two 1.5 mm × 1.5 mm cortical windows were removed from the non-articulating cartilaginous regions of the medial and lateral femoral condyles using a 1.5 mm drill bit. The anterior cruciate ligament and posterior cruciate ligament were then sequentially incised and the knee hyperextended to −45° to disrupt the posterior capsule (Figure 5A). The right knee was immobilized at 140° of flexion with Ethibond Excel polybutylate-coated braided polyester sutures (Figure 5B,C). The proper reduction of the patellofemoral joint was checked prior to closure. After surgery, rats were permitted unrestricted movement within their cages (10 rats to a cage of 0.1 m3).

Bioluminescence assays comprise a high-sensitivity and non-invasive technique for monitoring specific cellular and genetic activities in a living organism. At 2 and 8 weeks after surgery, the luciferase expression and distribution in the individual rats in the CNT group were measured using a Xenogen IVIS 50 Bioluminescence System (R&D Systems). For a comparison, fluorescence was also detected in the joint of rats in the ORC group.

At 2, 4 and 8 weeks after the initial surgery date, a total of 45 rats weresacrificed using an overdose of pentobarbital sodium (Dainihon, Osaka, Japan). Posterior joint capsules were harvested and lysed with lysis buffer. The cell lysates were centrifuged at 13,000× g for 15 min at 4 °C, and the supernatants were collected for western blot analysis. Equal amounts of protein were separated on a 12% gel using SDS–PAGE and electrotransferred to nitrocellulose membranes (Millipore Corp., Billerica, MA, USA). After blocking with 5% non-fat milk, the membranes were incubated with antibodies against ERK2 and p-ERK (Cell Signaling Technology, Beverly, MA, USA) for 1 h at room temperature. A monoclonal anti-GAPDH antibody (Cell Signaling) was used as a loading control. After washing, the membranes were incubated with HRP-conjugated IgG (Acris Antibodies, GmbH, Hiddenhausen, Germany) for 1 h, and immunoreactive bands were detected by chemiluminescence (Amersham Biosciences, Freiburg, Germany).

Single-labeling immunohistochemistry was used to identify and quantify myofibroblasts in joint capsule preparations of 8 weeks after operation, as previously described [37]. Briefly, 8 mm thick sections of frozen samples from 23 sacrificed rats at 8 weeks were cut and mounted onto pre-coated glass slides, and then pretreated with hyaluronidase. Normal goat serum (10%) diluted in PBS was applied as a blocking agent. A monoclonal α-SMA antibody (clone asm-1, Roche Molecular Biochemicals, Laval, QC, Canada) was incubated for 1 h at 37 °C. The sections were washed and then incubated for 1 h at room temperature with a sheep anti-mouse IgG horseradish peroxidase (HRP)-conjugated secondary antibody (Roche, Shanghai, China) (dilution 1:50). The sections were washed again and then incubated with DAB/peroxide substrate (Roche, Shanghai, China). Finally, the sections were counterstained with 40-6-diamidine-2-phenyl indole (DAPI; Vector Laboratories, Burlingame, MA, USA) to label all nuclei. The sections were viewed under a light microscope (Zeiss, Axioskop 2 plus, Toronto, ON, Canada) and images were captured (200×) with a digital camera (Zeiss, Axiocam, Toronto, ON, Canada). Five randomly selected areas from four sections of each specimen were used to analyze cell numbers using Image-Pro Plus (Media Cybernetics, Silver Spring, MD, USA). Cell nuclei associated with α-SMA were counted as myofibroblasts. The data were collected as the average number of myofibroblasts per high-power field.

3.7. Measurement of the Flexion Contracture Angle

Twenty-three Rats remaining in each group were euthanized at 8 weeks and the sutures were carefully removed. Each rat was then positioned on a table on its right side, with the left lower leg attached to a 5 cm diameter pulley with a silk thread. A thick silk thread was attached to the periphery of the pulley and an extension of 0.49 N was applied by pulling the thick silk thread with a weight. Flexion contracture angles were determined as “a” (Figure 5D). All measurements were made within 15 min after euthanasia.

Following biomechanical evaluation, the same rats were used to measure collagen content in the posterior knee joint capsule. The posterior knee joint capsule of each rat was harvested, lyophilized, and stored at −20 °C until analysis. Total collagen content was calculated as a measure of hydroxyproline content using the Woessner method [39,40]. The relative amounts of Type I and III collagens were determined using electrophoresis of alpha chains and cyanogen bromide-cleaved peptides, according to the method of Chan and Cole [41]. This ratio was expressed as a percentage of Type III collagen to total of Types I and III collagen.

The results of this study suggest that ERK2 activation is an important event in the pathogenesis of joint capsule fibrosis and the subsequent loss of motion after intra-articular injury. This study provides a novel and promising strategy to prevent the development of joint capsule fibrosis, although further studies involving larger animals are required to support these results. 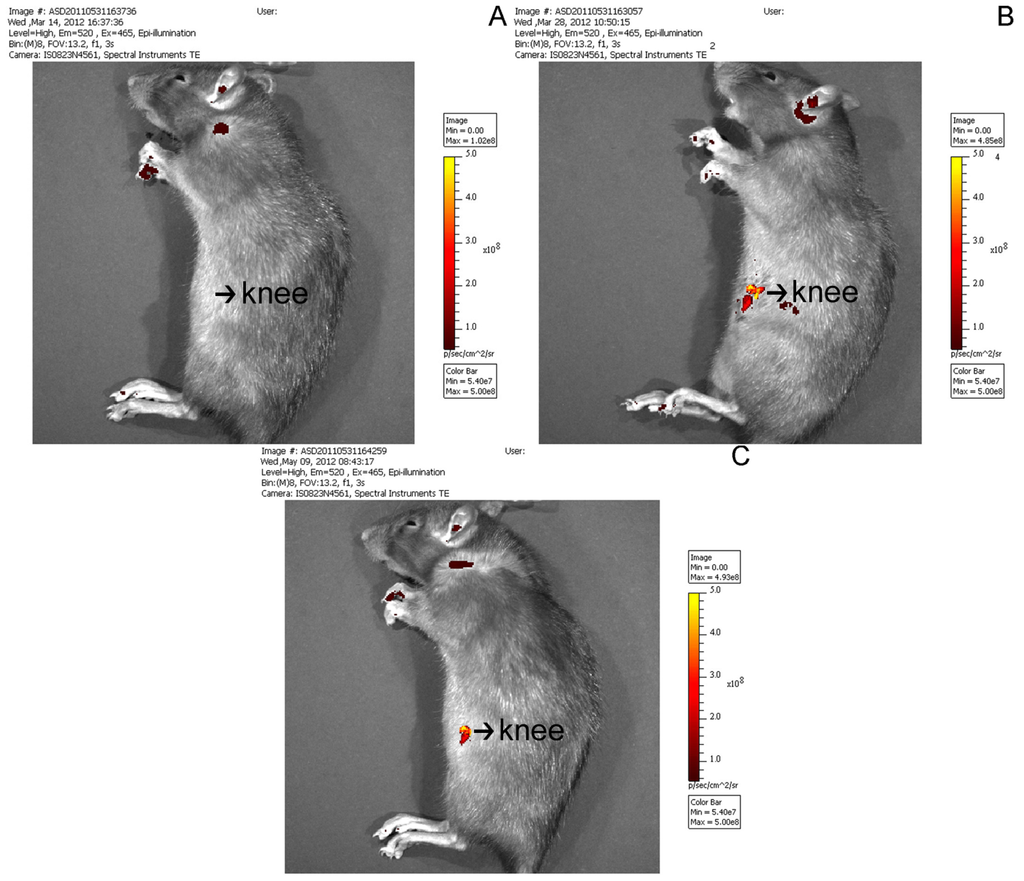 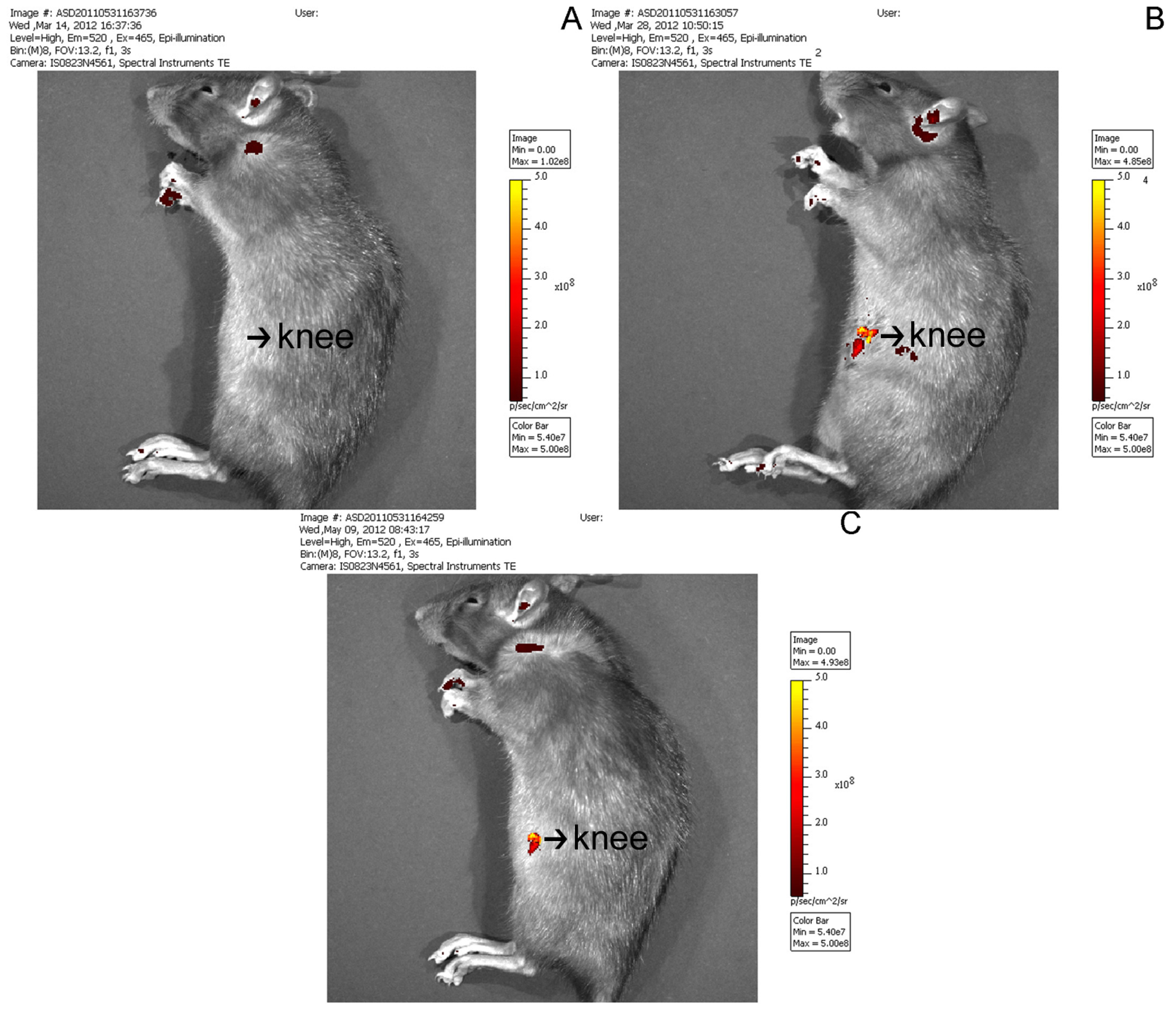 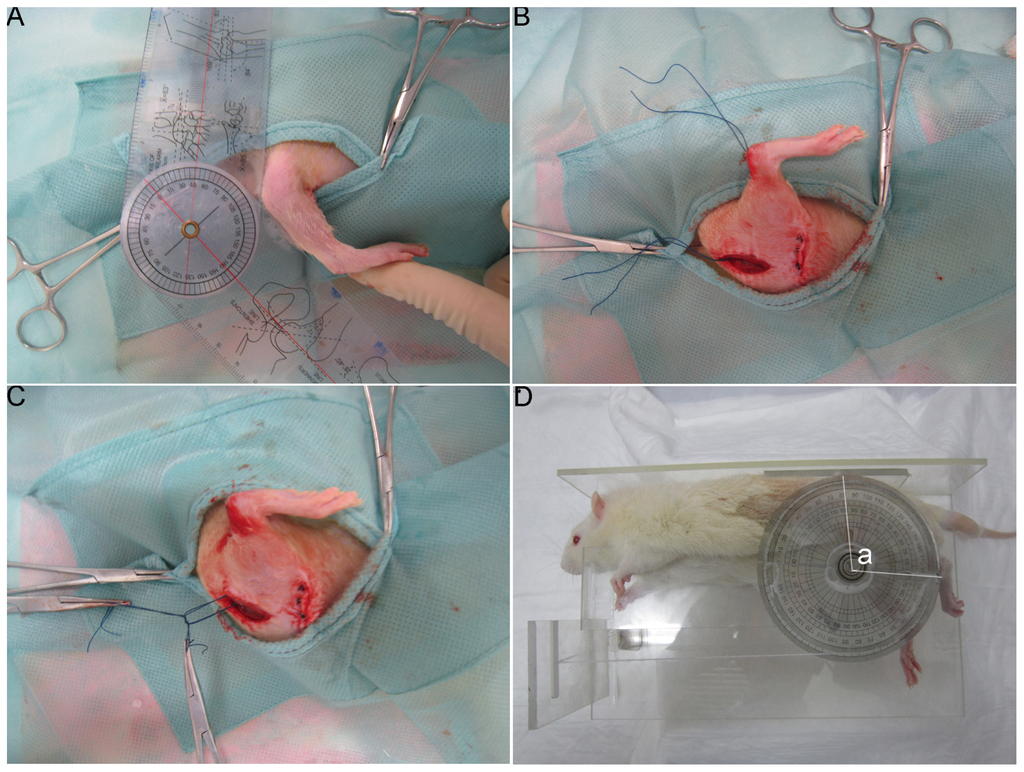 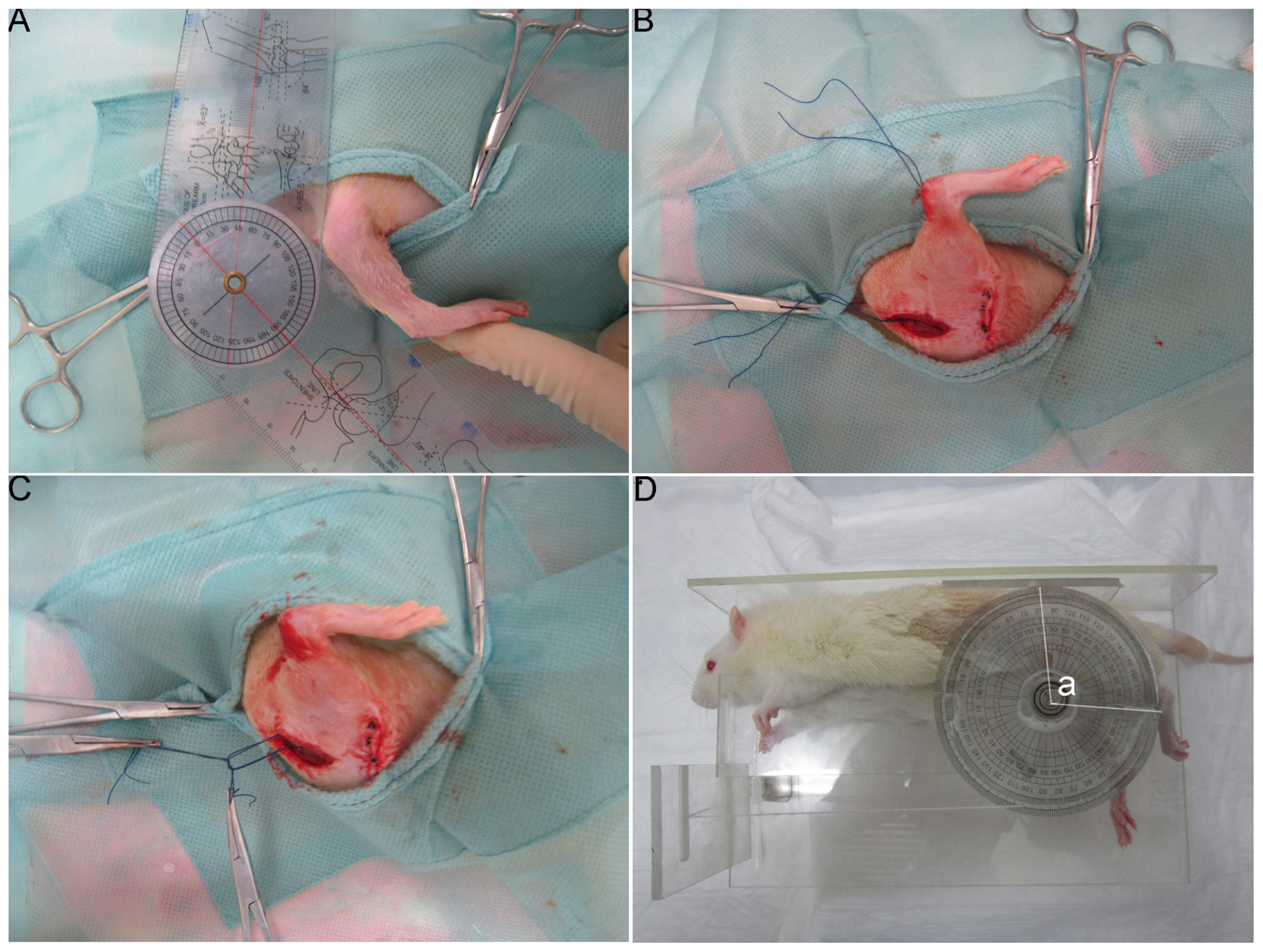 Table 1. Myofibroblast counts in the CON, ORC and CNT groups.
A total of 23 animals in three groups were used for this evaluation; Data represent means ± SD; Values of p < 0.05 are considered to indicate statistical significance;
ap, vs. CON;
bp, vs. ORC;
NA, not applicable.

Table 2. Contracture angles of the rats in the CON, ORC and CNT groups.
A total of 23 animals in three groups were used for this evaluation; Data represent means ± SD; Values of p < 0.05 are considered to indicate statistical significance;
ap, vs. CON;
bp, vs. ORC;
NA, not applicable.

This work was supported by the Natural Science Foundation of China (GSCX0818005).