The Role of Chemokines in Hepatitis C Virus-Mediated Liver Disease

Many investigations have revealed that a low recurrence rate of hepatocellular carcinoma (HCC) is associated with high serum albumin levels in patients; therefore, high levels of serum albumin are a major indicator of a favorable prognosis. However, the mechanism inhibiting the proliferation of HCC has not yet been elucidated, so we investigated the effect of serum albumin on HCC cell proliferation. Hep3B was cultured in MEM with no serum or containing 5 g/dL human albumin. As control samples, Prionex was added to generate the same osmotic pressure as albumin. After 24-h incubation, the expressions of α-fetoprotein (AFP), p53, p21, and p57 were evaluated with real-time PCR using total RNA extracted from the liver. Protein expressions and the phosphorylation of Rb (retinoblastoma) were determined by Western blot analysis using total protein extracted from the liver. For flow cytometric analysis of the cell cycle, FACS analysis was performed. The percentages of cell cycle distribution were evaluated by PI staining, and all samples were analyzed employing FACScalibur (BD) with appropriate software (ModFit LT; BD). The cell proliferation assay was performed by counting cells with using a Scepter handy automated cell counter (Millipore). The mRNA levels of AFP relative to Alb(−): Alb(−), Alb(+), and Prionex, were 1, 0.7 ± 0.2 (p < 0.001 for Alb(−)), and 1 ± 0.3, respectively. The mRNA levels of p21 were 1, 1.58 ± 0.4 (p = 0.007 for Alb(−) and p = 0.004 for Prionex), and 0.8 ± 0.2, respectively. The mRNA levels of p57 were 1, 4.4 ± 1.4 (p = 0.002 for Alb(−) and Prionex), and 1.0 ± 0.1, respectively. The protein expression levels of Rb were similar in all culture media. The phosphorylation of P807/811 and P780 of Rb protein was reduced in Alb(+). More cells in the G0/G1 phase and fewer cells in S and G2/M phases were obtained in Alb(+) than in Alb(−) (G0/G1: 60.9%, 67.7%, 61.5%; G2/M: 16.5%, 13.1%, 15.6%; S: 22.6%, 19.2%, 23.0%, Alb(−), Alb(+), Prionex, respectively). The same results were obtained in HepG2. Cell proliferation was inhibited in 5 g/dL albumin medium in both HepG2 cells and Hep3B cells in 24 h culture by counting cell numbers. The presence of albumin in serum reduces the phosphorylation of Rb proteins and enhances the expression of p21 and p57, following an increase in the G0/G1 cell population, and suppresses cell proliferation. These results suggest that albumin itself suppresses the proliferation of hepatocellular carcinoma.
Keywords: albumin; hepatocellular carcinoma; cell cycle albumin; hepatocellular carcinoma; cell cycle

Using media with 5 g/dL albumin, the effects of the albumin concentration on AFP, P21, P57 protein expressions were revealed. The relative expression of AFP protein expression was significantly lower in albumin-added medium than in albumin-free medium and Prionex-added medium in both HepG2 and Hep3B cell lines. We used cells cultured in serum-containing medium as a positive control and Kato III gastric cells that did not express AFP were used as a negative control. The same results were obtained for the protein level in p21 and p57 compared to mRNA expression.

Many studies have reported the inhibition of hepatocarcinogenesis [6,7]. In general, the incidence of hepatocellular carcinoma recurrence is high in patients with advanced liver fibrosis [8]. As a result, these patients have marked hypoalbuminemia. In vitro and in vivo studies have demonstrated that BCAAs promote albumin synthesis [9,10]. On the other hand, it has been reported that the mechanism of the inhibition of carcinogenesis by BCAA administration involves its immunostimulating [11,12] and antitumor [13,14] effects. The main inhibition mechanism of BCAA carcinogenesis was reported as the improvement of insulin deficiency and abnormal glucose metabolism [15,16] or its direct effects on inhibiting apoptosis induction. Although BCAAs influence pathways including mTOR, their effect can be restricted to mTOR complex 1 (mTORC1), which is associated with the translation of protein and has no effect on mTOR complex2 (mTORC2), which is closely associated with tumorigenesis [17]. The BCAA direct effect may be the induction of hepatocellular carcinoma apoptosis and the inhibition of hepatocellular carcinoma cells to inhibit the phosphorylation of GSK3β [18]. It is therefore important for the inhibition of tumor progression to inhibit only mTORC2 [19]. On the other hand, there have been no reports on the direct relationship between albumin concentrations and the inhibition of carcinogenesis. The physiological roles of albumin are to maintain colloid osmotic pressure, transport various substances, and provide an endogenous source of amino acids; however, to date, no direct inhibition of carcinogenesis by albumin has been reported. In this study, hypoalbuminemia reduced AFP expression. It is known that, although AFP is highly expressed in the fetal liver and in trace amounts in the adult liver, its expression is reactivated during hepatocyte proliferation and hepatocarcinogenesis. Since albumin inhibits AFP expression, it was expected that albumin would inhibit hepatocyte proliferation. Indeed, an experiment using flow cytometry showed that albumin significantly increased the G0/G1 phase ratio in the two cell lines, demonstrating that albumin inhibits the cell cycle. Changes in plasma osmotic pressure are known to result in changes in cell cycles and cell proliferation signals [20]. In the present experiment, the addition of the non-antigenic substance Prionex to adjust the colloid osmotic pressure eliminated the influence of changes in plasma osmotic pressure. Since albumin had a similar function in both p53-negative Hep3B cells and p53-positive HepG2 cells, these actions of albumin are not mediated by p53. Also, in HepG2 cells, albumin induced no changes in the p53 gene or protein expression levels or in the phosphorylation of various proteins (data not shown).
On the other hand, albumin inhibited the phosphorylation of Rb proteins p780 and p807/811. In addition, the expression of p21 and p57 increased significantly in the presence of albumin, suggesting that albumin induces the expression of p21 and p57 to inhibit Rb protein phosphorylation, thereby arresting the cell cycle in the G1 phase. These results suggest that albumin itself suppresses the proliferation of hepatocellular carcinoma. However, it is unclear how albumin induces the expressions of p21 and p57. It is known that, under various stress conditions, p21 induction results from p53 induction. In the present experiment, there were no changes in p53 expression or phosphorylation, and the same effect was observed in Hep3B, which did not express p53. The results revealed that these effects were associated with the Rb pathway but not with the p53 pathway.
It is generally unknown whether albumin can promote cell proliferation and this might differ among cell types. It has been reported that human or bovine albumin can promote SV-40-transformed Balb/c 3T3 cells and B cell proliferation in vitro, but the mechanism was unclear in these experiments [21,22] and no reports have revealed the association between albumin concentration and cell proliferation, including its biological effects. It is unclear whether albumin alone induces these changes. In the present experiment, cell cultures were washed twice with serum-free medium before the addition of albumin, and cells were cultured. However, it is unclear to what extent these growth factors remained bound to the cell-membrane surface or were secreted into the culture medium; therefore, the possibility cannot be excluded that albumin may enhance the actions of these factors.
Although further in vivo studies using analbuminemia rats are necessary to demonstrate the inhibition of carcinogenesis by albumin, the present study provides the first data to support the clinical observations that hypoalbuminemia is associated with a tendency to develop hepatocellular carcinoma.

To evaluate cell proliferation we counted cells after 24 h incubation in each solution using a Scepter handheld automated cell counter (Millipore, Billerica, Mexico). Cells were cultured in several media in a 6 cm dish and collected by cleaving with trypsin to separate cells, washing twice with PBS, resuspending cells and then counting the cells.
To estimate the cell toxicity of albumin and Prionex we measured lactate dehydrogenase (LDH) in the medium after 24-h culture using the Cyto Tox96 non-radioactive cytotoxicity assay (Promega, Fitchbarg, WI, USA), performed according to the manual.

The presence of albumin in serum reduces the phosphorylation of Rb proteins and enhances the expression of p21 and p57, following an increase in the G0/G1 cell population, and suppresses cell proliferation. These results suggest that albumin itself suppresses the proliferation of hepatocellular carcinoma. 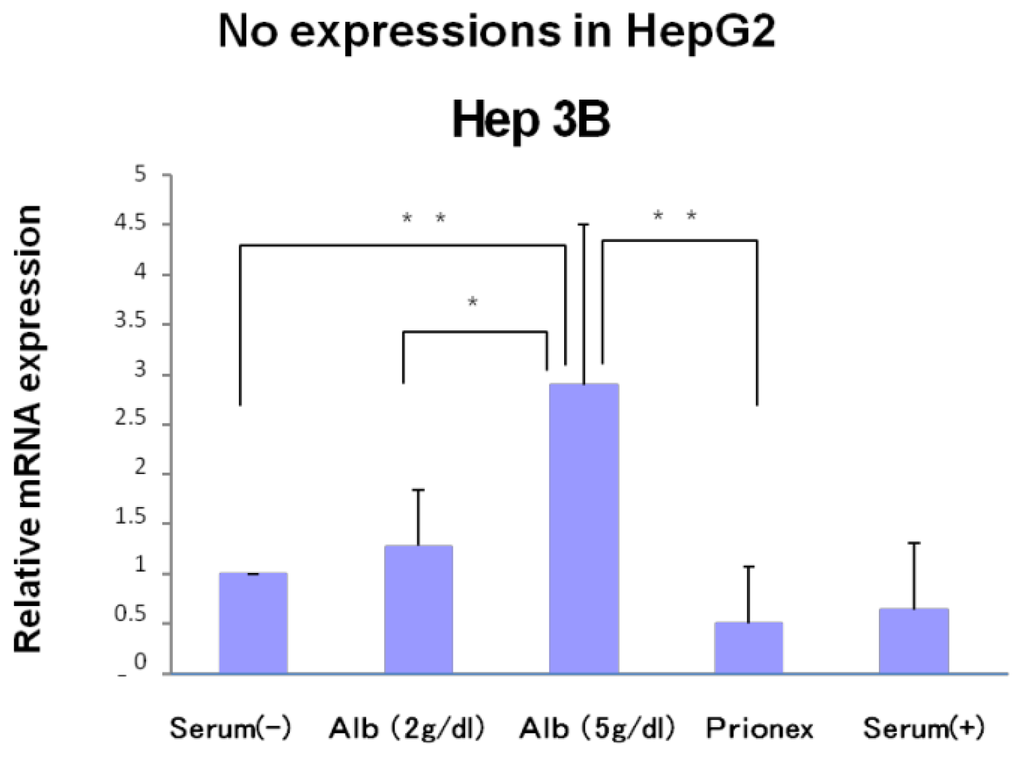 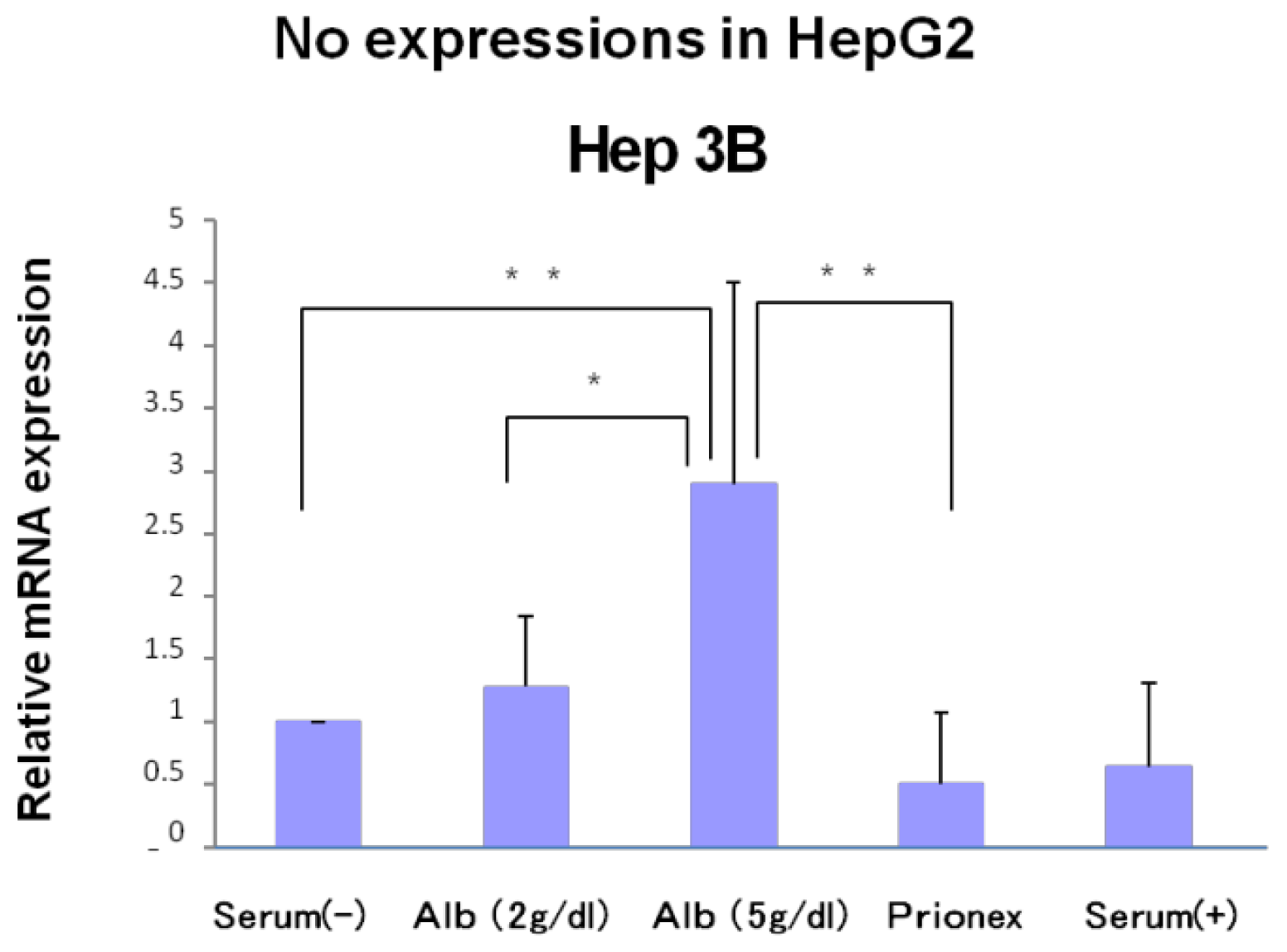 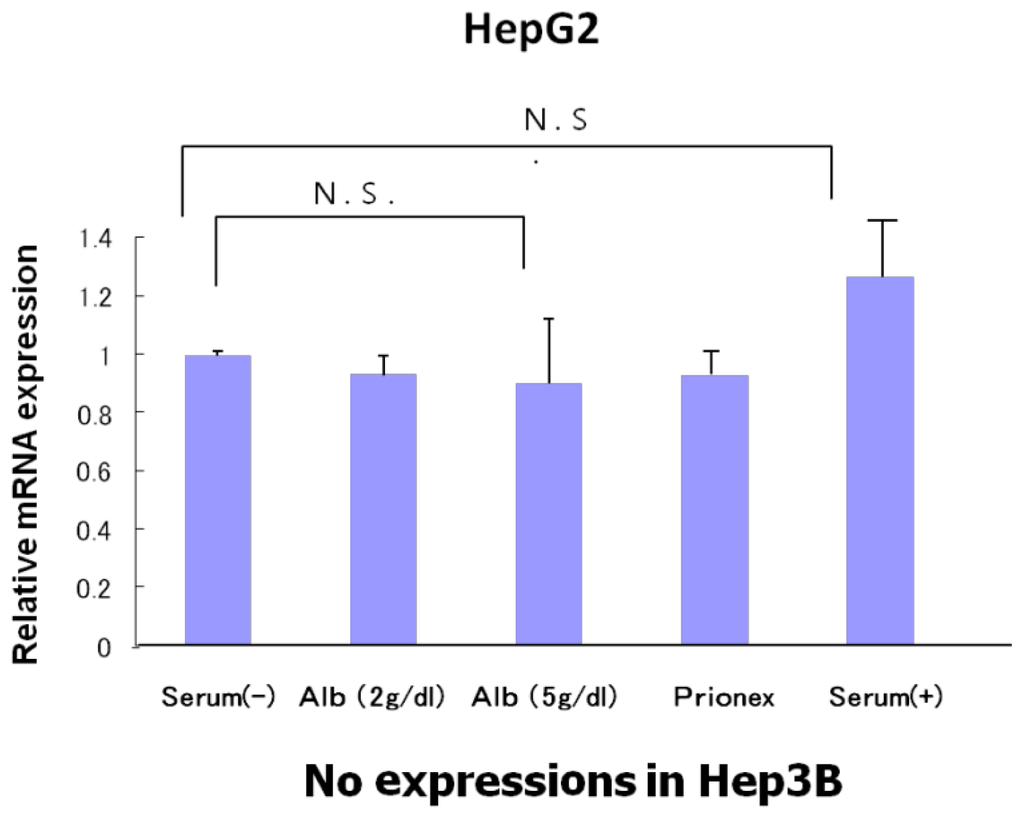 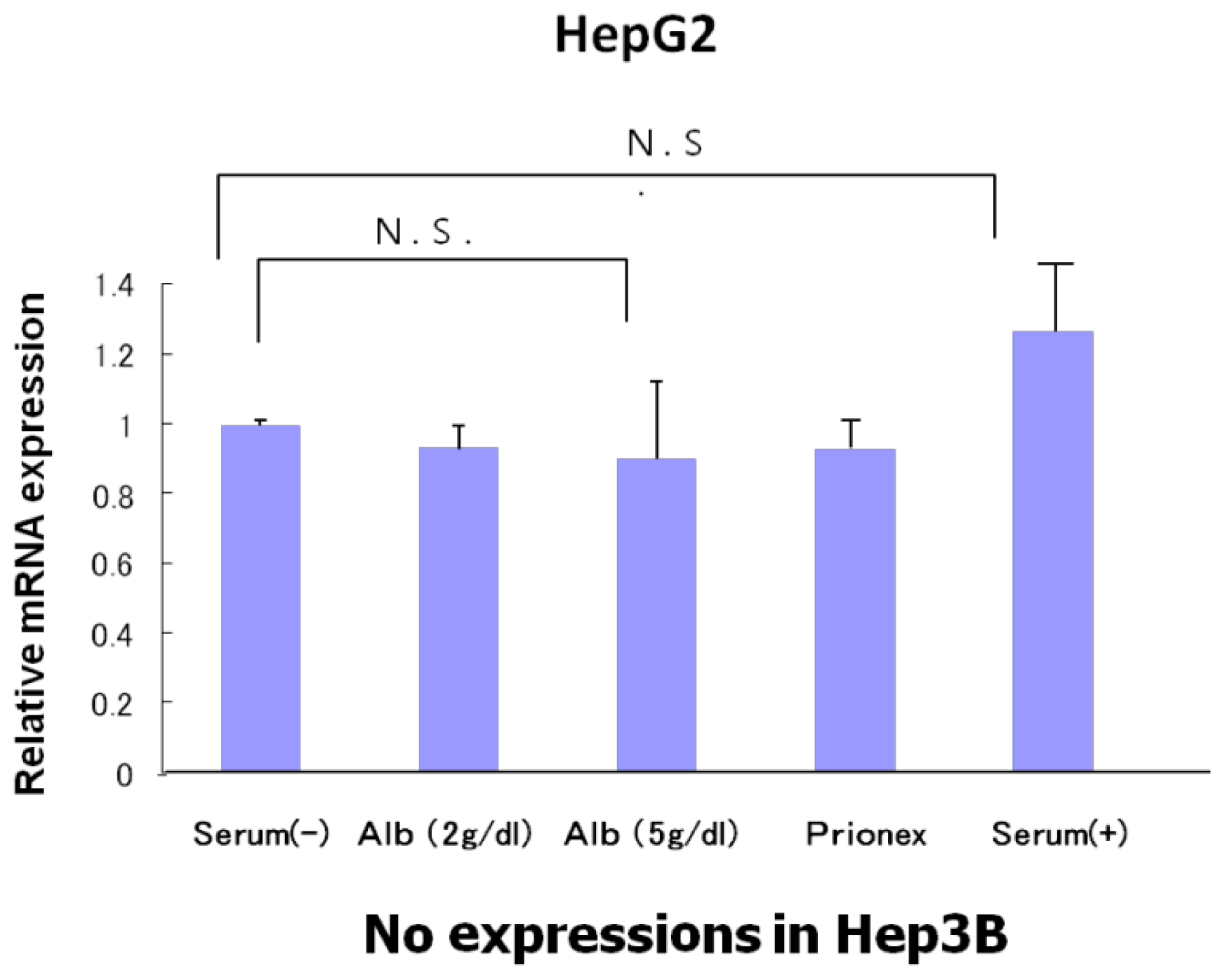 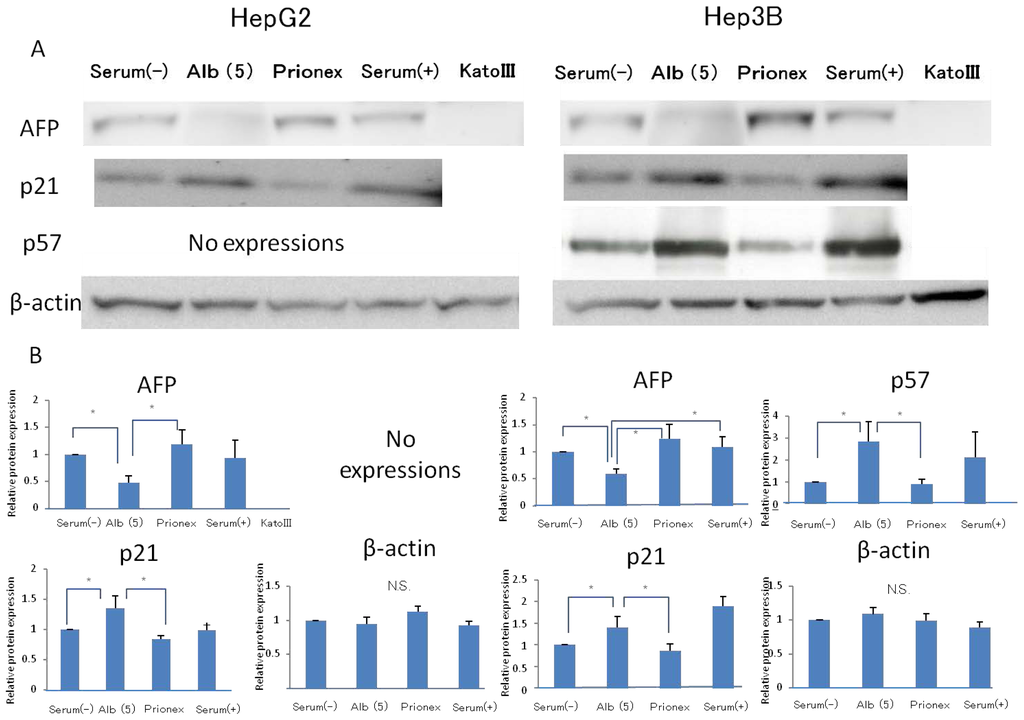 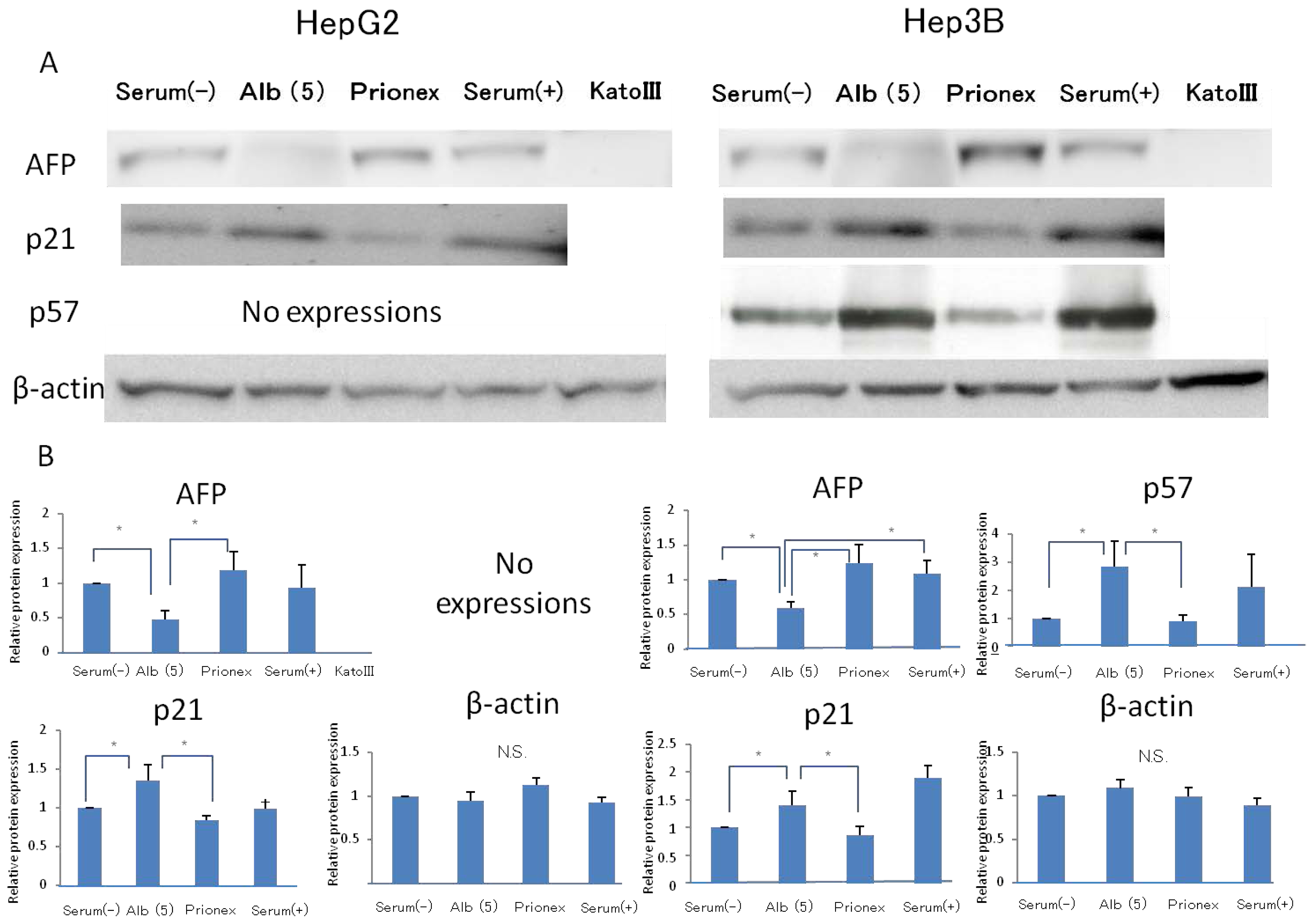 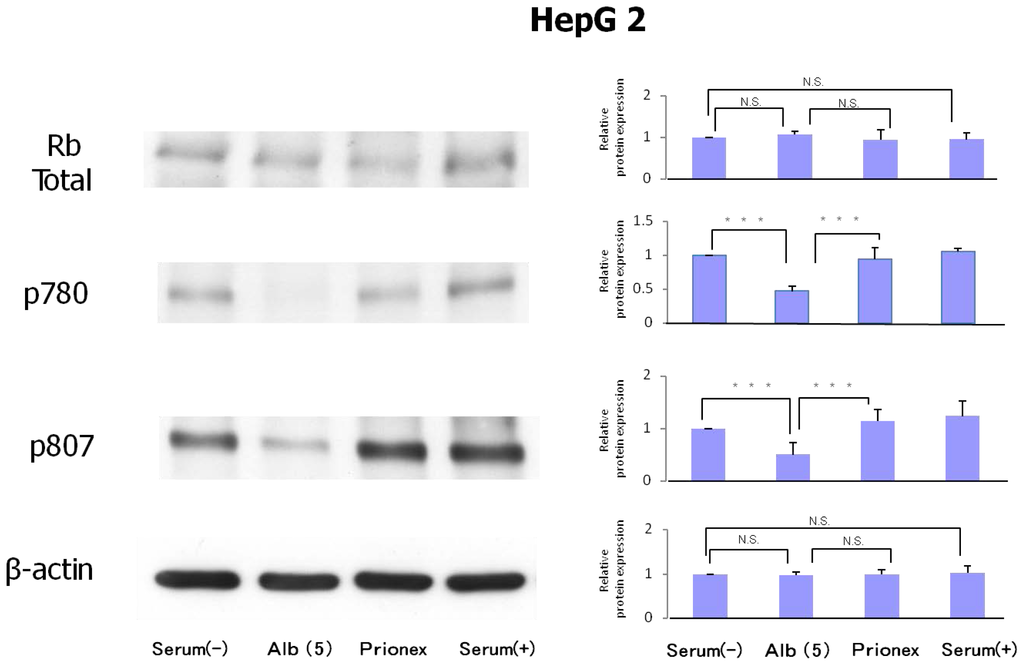 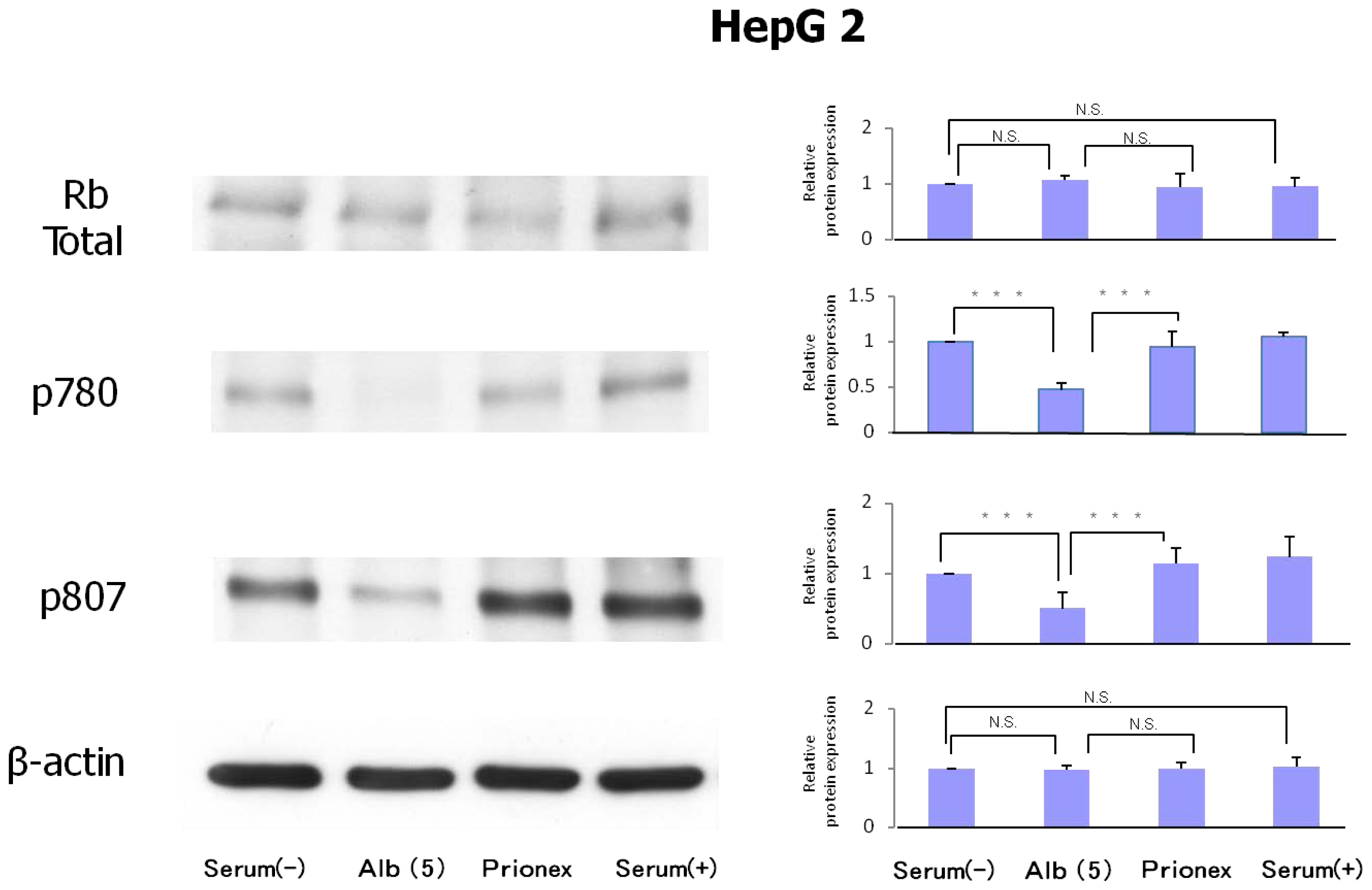 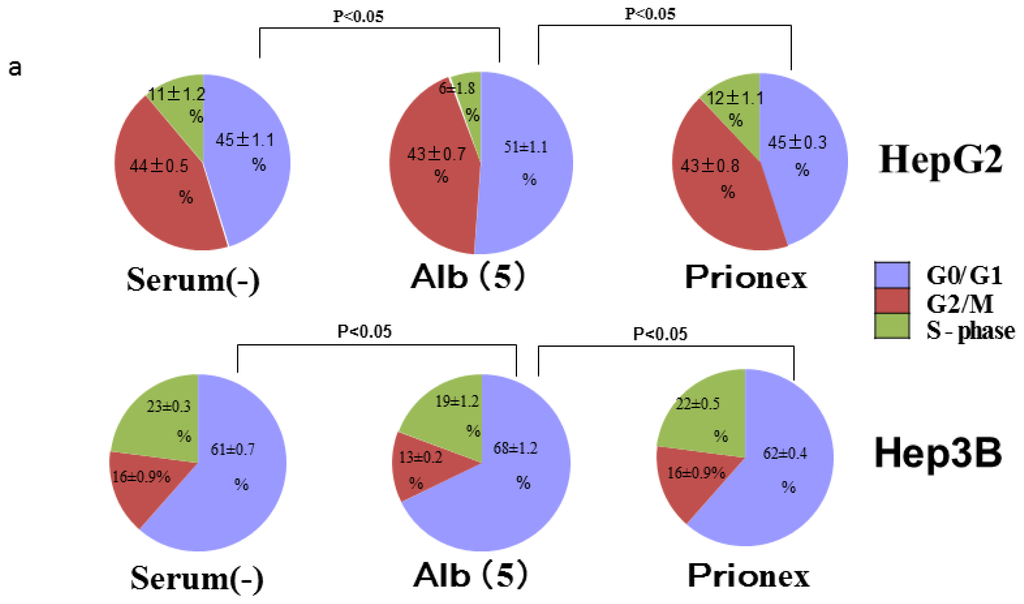 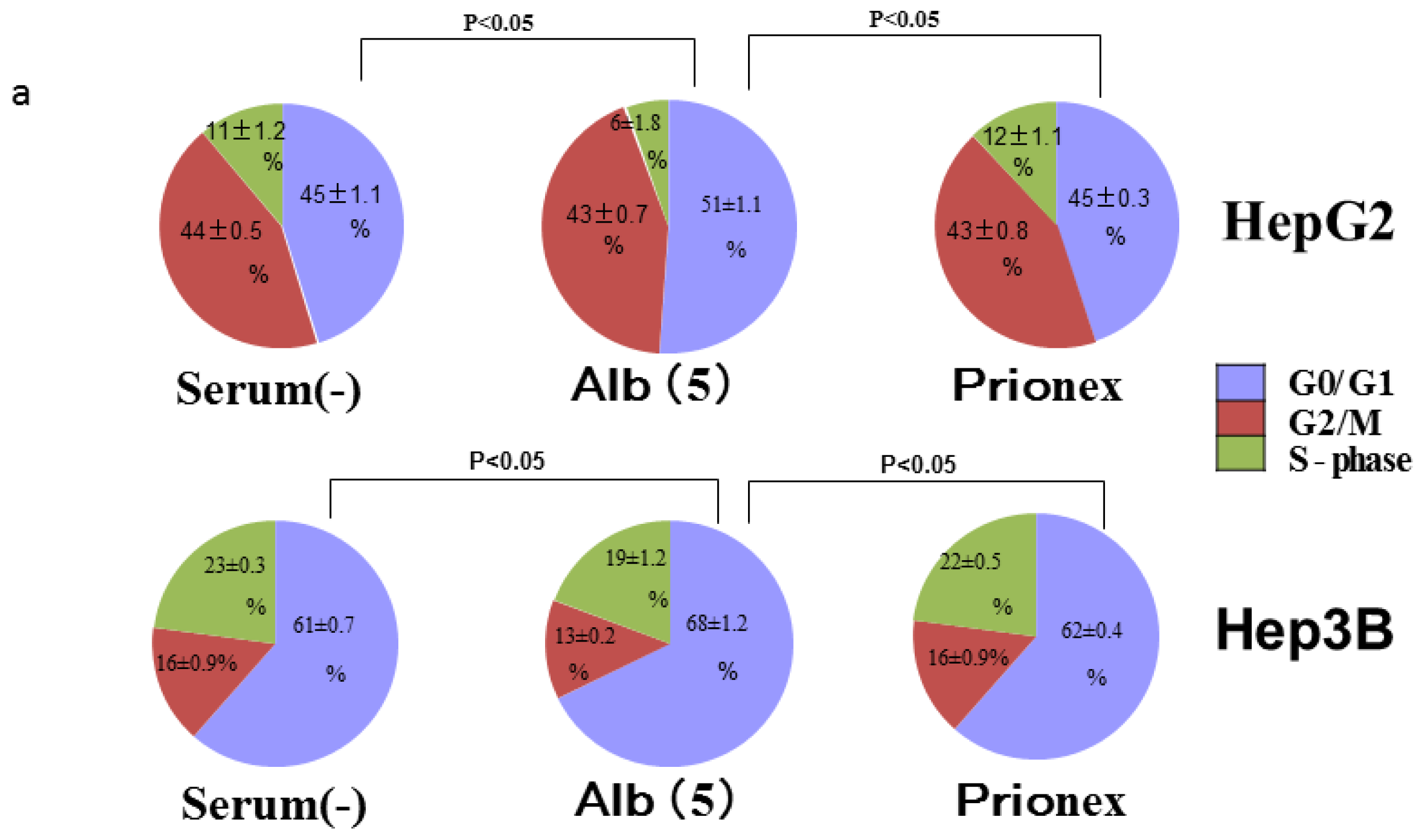 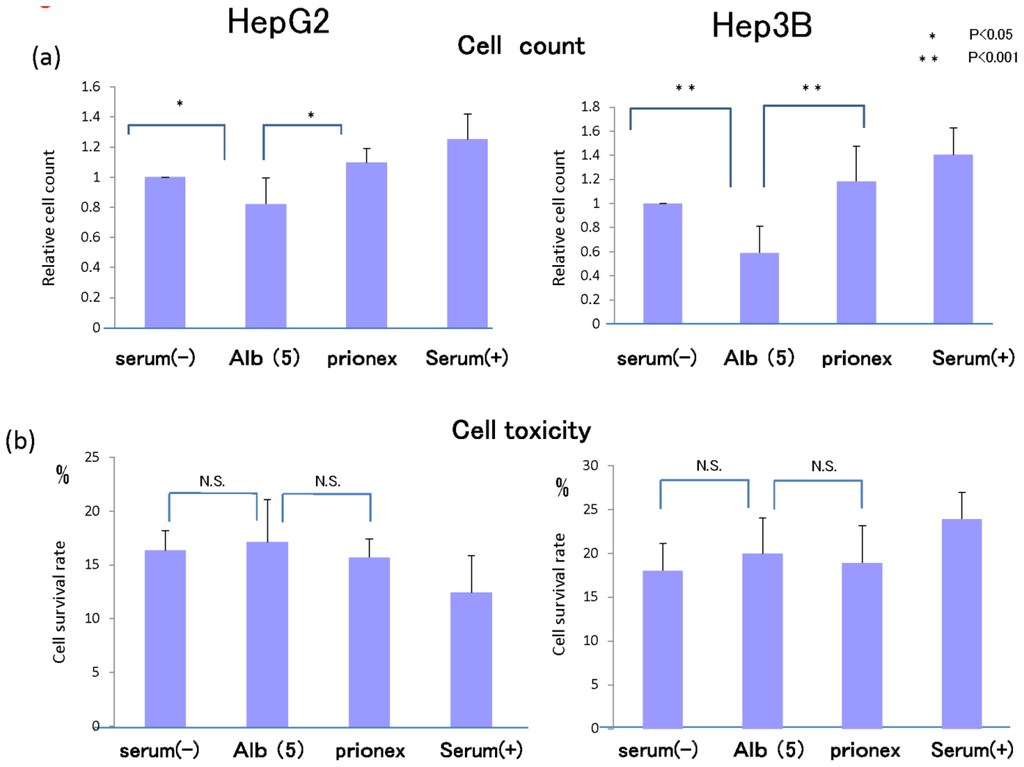 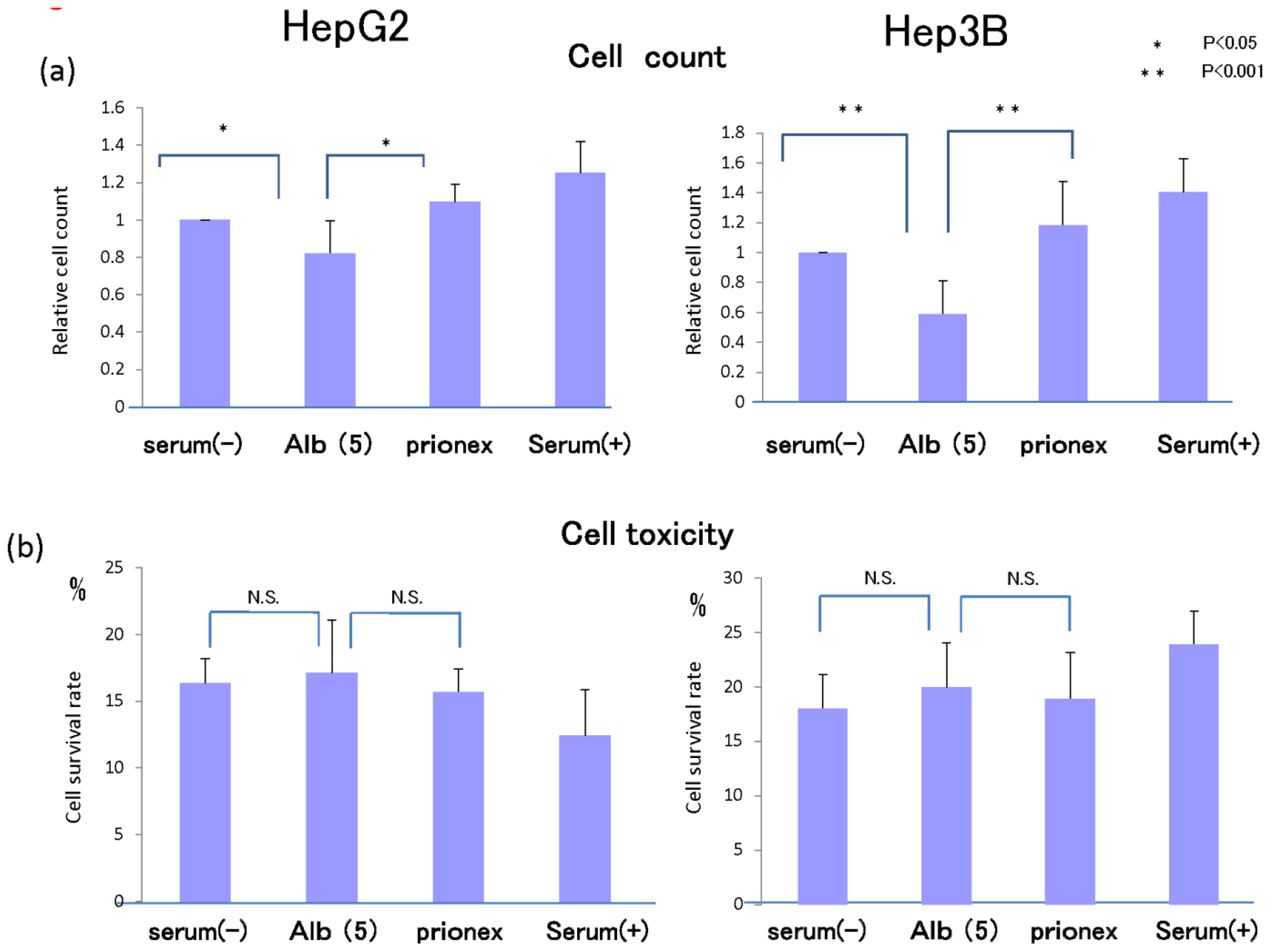 © 2014 by the authors; licensee MDPI, Basel, Switzerland This article is an open access article distributed under the terms and conditions of the Creative Commons Attribution license (http://creativecommons.org/licenses/by/3.0/).