Pharmacotherapy Treatment Options for Insomnia: A Primer for Clinicians
Previous Article in Journal

Although the dopamine D2 receptor (DRD2) has been a main target of antipsychotic pharmacotherapy for the treatment of schizophrenia, the standard treatment does not offer sufficient relief of symptoms to 20%–30% of patients suffering from this disorder. Moreover, over 80% of patients experience relapsed psychotic episodes within five years following treatment initiation. These data strongly suggest that the continuous blockade of DRD2 by antipsychotic(s) could eventually fail to control the psychosis in some point during long-term treatment, even if such treatment has successfully provided symptomatic improvement for the first-episode psychosis, or stability for the subsequent chronic stage. Dopamine supersensitivity psychosis (DSP) is historically known as a by-product of antipsychotic treatment in the manner of tardive dyskinesia or transient rebound psychosis. Numerous data in psychopharmacological studies suggest that the up-regulation of DRD2, caused by antipsychotic(s), is likely the mechanism underlying the development of the dopamine supersensitivity state. However, regardless of evolving notions of dopamine signaling, particularly dopamine release, signal transduction, and receptor recycling, most of this research has been conducted and discussed from the standpoint of disease etiology or action mechanism of the antipsychotic, not of DSP. Hence, the mechanism of the DRD2 up-regulation or mechanism evoking clinical DSP, both of which are caused by pharmacotherapy, remains unknown. Once patients experience a DSP episode, they become increasingly difficult to treat. Light was recently shed on a new aspect of DSP as a treatment-resistant factor. Clarification of the detailed mechanism of DSP is therefore crucial, and a preventive treatment strategy for DSP or treatment-resistant schizophrenia is urgently needed. View Full-Text
Keywords: antipsychotic; dopamine signal; rebound psychosis; tardive dyskinesia antipsychotic; dopamine signal; rebound psychosis; tardive dyskinesia
►▼ Show Figures 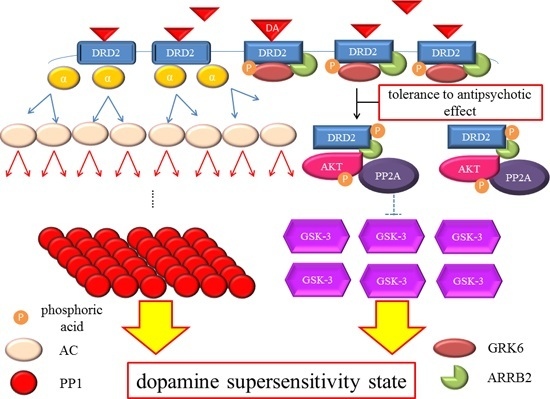