Preparation, Characterization and in Vivo Antimycobacterial Studies of Panchovillin-Chitosan Nanocomposites

Chitosan (CS, molecular weight 20.2 kDa, degree of deacylation (DD) 73.31%) was successfully obtained by deacetylation of chitin extracted from shrimp (Litopenaeus vannamei) shell wastes. The encapsulation of the bioactive natural product, panchovillin (PANV), isolated from Erythrina schliebenii, on a chitosan-tripolyphosphate (CS/TPP) nano-framework was achieved by ionotropic gelation. Characterization of pure CS, CS/TPP and PANV-CS/TPP nanocomposites was performed by FTIR, SEM and XRD. The molecular weight of chitosan and the thermal stability of the materials were determined by MALDI-TOF-MS and simultaneous thermal analyzer (STA)/DTG, respectively. The respective encapsulation efficiency and loading capacity of the PANV were found to be 70% and 0.36%. The in vitro release studies showed an initial burst of 42% of PANV in the first six hours. This was followed by a slow and sustained release up to 72 h. The in vivo antimycobacterial activities of both PANV and PANV-CS/TPP nanocomposite against Mycobacterium indicus pranii (MIP) using Galleria mellonella larvae as an in vivo infection model are reported in this paper. View Full-Text
Keywords: panchovillin; chitosan; nanocomposites; antimycobacterial; Galleria mellonella panchovillin; chitosan; nanocomposites; antimycobacterial; Galleria mellonella
►▼ Show Figures 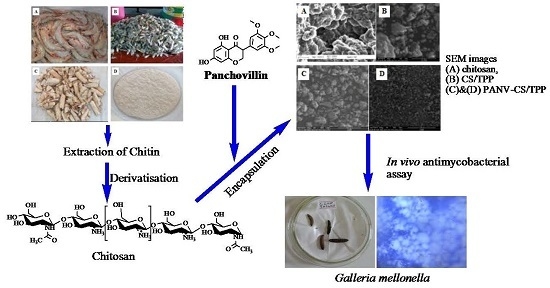