Inhibition of CCAR1, a Coactivator of β-Catenin, Suppresses the Proliferation and Migration of Gastric Cancer Cells
Previous Article in Journal

The Role of Inhaled Loxapine in the Treatment of Acute Agitation in Patients with Psychiatric Disorders: A Clinical Review
Previous Article in Special Issue

Endoplasmic reticulum (ER) stress-induced apoptosis plays an important role in a range of neurological disorders, such as neurodegenerative diseases, spinal cord injury, and diabetic neuropathy. Valproate (VPA), a typical antiepileptic drug, is commonly used in the treatment of bipolar disorder and epilepsy. Recently, VPA has been reported to exert neurotrophic effects and promote neurite outgrowth, but its molecular mechanism is still unclear. In the present study, we investigated whether VPA inhibited ER stress and promoted neuroprotection and neuronal restoration in SH-SY5Y cells and in primary rat cortical neurons, respectively, upon exposure to thapsigargin (TG). In SH-SY5Y cells, cell viability was detected by the 3-(4,5-dimethyl-2-thiazolyl)-2,5-diphenyl-2-H-tetrazolium bromide (MTT) assay, and the expression of ER stress-related apoptotic proteins such as glucose‑regulated protein (GRP78), C/EBP homologous protein (CHOP), and cleaved caspase-12/-3 were analyzed with Western blot analyses and immunofluorescence assays. To explore the pathway involved in VPA-induced cell proliferation, we also examined p-AKT, GSK3β, p-JNK and MMP-9. Moreover, to detect the effect of VPA in primary cortical neurons, immunofluorescence staining of β-III tubulin and Anti-NeuN was analyzed in primary cultured neurons exposed to TG. Our results demonstrated that VPA administration improved cell viability in cells exposed to TG. In addition, VPA increased the levels of GRP78 and p-AKT and decreased the levels of ATF6, XBP-1, GSK3β, p-JNK and MMP-9. Furthermore, the levels of the ER stress-induced apoptosis response proteins CHOP, cleaved caspase-12 and cleaved caspase-3 were inhibited by VPA treatment. Meanwhile, VPA administration also increased the ratio of Bcl-2/Bax. Moreover, VPA can maintain neurite outgrowth of primary cortical neurons. Collectively, the neurotrophic effect of VPA is related to the inhibition of ER stress-induced apoptosis in SH-SY5Y cells and the maintenance of neuronal growth. Collectively, our results suggested a new approach for the therapeutic function of VPA in neurological disorders and neuroprotection. View Full-Text
Keywords: ER stress; valproate; apoptosis; neurological disorders; neurite outgrowth ER stress; valproate; apoptosis; neurological disorders; neurite outgrowth
►▼ Show Figures 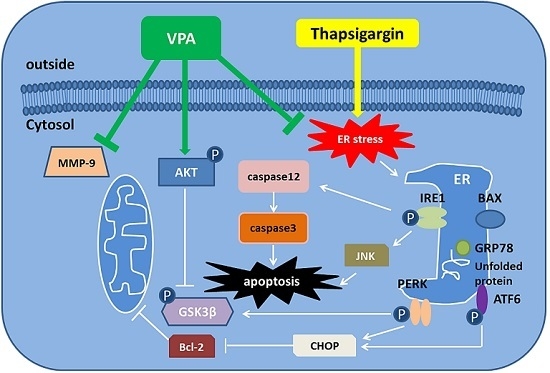