Human Chorionic Gonadotropin: The Pregnancy Hormone and More
Next Article in Special Issue

The E3 ubiquitin ligase Anaphase Promoting Complex/Cyclosome (APC/C) regulates important processes in cells, such as the cell cycle, by targeting a set of substrates for degradation. In the last decade, APC/C has been related to several major functions in the nervous system, including axon guidance, synaptic plasticity, neurogenesis, and neuronal survival. Interestingly, some of the identified APC/C substrates have been related to neurodegenerative diseases. There is an accumulation of some degradation targets of APC/C in Alzheimer’s disease (AD) brains, which suggests a dysregulation of the protein complex in the disorder. Moreover, recently evidence has been provided for an inactivation of APC/C in AD. It has been shown that oligomers of the AD-related peptide, Aβ, induce degradation of the APC/C activator subunit cdh1, in vitro in neurons in culture and in vivo in the mouse hippocampus. Furthermore, in the AD mouse model APP/PS1, lower cdh1 levels were observed in pyramidal neurons in CA1 when compared to age-matched wildtype mice. In this review, we provide a complete list of APC/C substrates that are involved in the nervous system and we discuss their functions. We also summarize recent studies that show neurobiological effects in cdh1 knockout mouse models. Finally, we discuss the role of APC/C in the pathophysiology of AD. View Full-Text
Keywords: ubiquitin ligase; neurodegeneration; excitotoxicity; oxidative stress ubiquitin ligase; neurodegeneration; excitotoxicity; oxidative stress
►▼ Show Figures 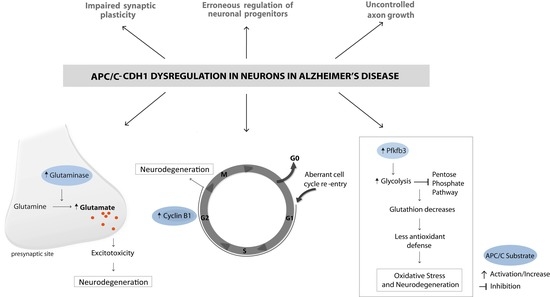