Stripe rust, caused by Puccinia striiformis f. sp. tritici (Pst), is one of the most devastating fungal diseases of wheat worldwide. It is essential to discover more sources of stripe rust resistance genes for wheat breeding programs. Specific locus amplified fragment sequencing (SLAF-seq) is a powerful tool for the construction of high-density genetic maps. In this study, a set of 200 recombinant inbred lines (RILs) derived from a cross between wheat cultivars Chuanmai 42 (CH42) and Chuanmai 55 (CH55) was used to construct a high-density genetic map and to identify quantitative trait loci (QTLs) for stripe rust resistance using SLAF-seq technology. A genetic map of 2828.51 cM, including 21 linkage groups, contained 6732 single nucleotide polymorphism markers (SNP). Resistance QTLs were identified on chromosomes 1B, 2A, and 7B; Qyr.saas-7B was derived from CH42, whereas Qyr.saas-1B and Qyr.saas-2A were from CH55. The physical location of Qyr.saas-1B, which explained 6.24–34.22% of the phenotypic variation, overlapped with the resistance gene Yr29. Qyr.saas-7B accounted for up to 20.64% of the phenotypic variation. Qyr.saas-2A, a minor QTL, was found to be a likely new stripe rust resistance locus. A significant additive effect was observed when all three QTLs were combined. The combined resistance genes could be of value in breeding wheat for stripe rust resistance. View Full-Text
Keywords: wheat; stripe rust; QTLs; SLAF-seq; chromosome translocation wheat; stripe rust; QTLs; SLAF-seq; chromosome translocation
►▼ Show Figures 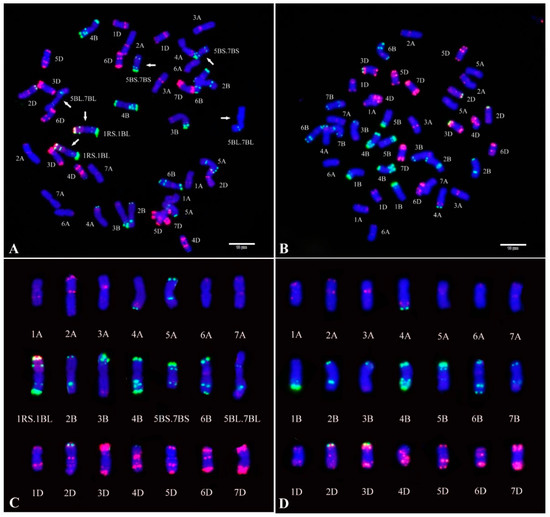