46,XX DSD due to Androgen Excess in Monogenic Disorders of Steroidogenesis: Genetic, Biochemical, and Clinical Features
Next Article in Special Issue

Kinetics of Flavoenzyme-Catalyzed Reduction of Tirapazamine Derivatives: Implications for Their Prooxidant Cytotoxicity

Mast cell tryptases have crucial roles in allergic and inflammatory diseases. The mouse tryptase genes represent a cluster of loci on chromosome 16p3.3. While their functional studies have been extensively performed, transcriptional regulation of tryptase genes is poorly understood. In this study, we examined the molecular basis of the tryptase gene expression in bone marrow-derived mast cells (BMMCs) of C57BL/6 mice and in MEDMC-BRC6 mast cells. The expression of the Tpsb2 and Tpsg1 genes, which reside at the 3′-end of the tryptase locus, is significantly decreased by the reduction of the GATA transcription factors GATA1 or GATA2. Chromatin immunoprecipitation assays have shown that the GATA factors bind at multiple regions within the locus, including 1.0 and 72.8 kb upstream of the Tpsb2 gene, and that GATA1 and GATA2 facilitate each other’s DNA binding activity to these regions. Deletion of the −72.8 kb region by genome editing significantly reduced the Tpsb2 and Tpsg1 mRNA levels in MEDMC-BRC6 cells. Furthermore, binding of CTCF and the cohesin subunit Rad21 was found upstream of the −72.8 kb region and was significantly reduced in the absence of GATA1. These results suggest that mouse tryptase gene expression is coordinately regulated by GATA1 and GATA2 in BMMCs. View Full-Text
Keywords: mast cell; tryptase; gene transcription mast cell; tryptase; gene transcription
►▼ Show Figures 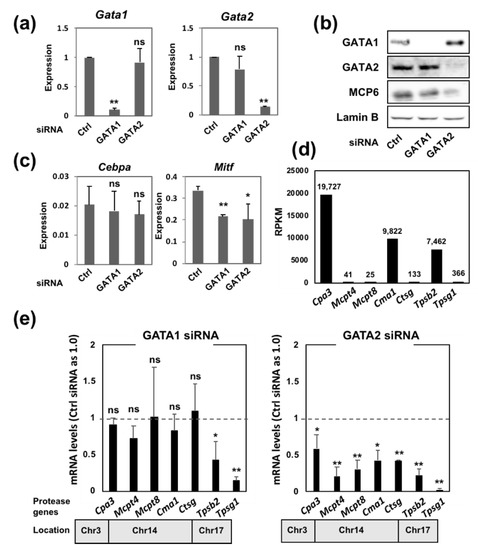