Novel H7N9 influenza virus transmitted from birds to human and, since March 2013, it has caused five epidemic waves in China. Although the evolution of H7N9 viruses has been investigated, the evolutionary changes associated with codon usage are still unclear. Herein, the codon usage pattern of two surface glycoproteins, hemagglutinin (HA) and neuraminidase (NA), was studied to understand the evolutionary changes in relation to host, epidemic wave, and pathogenicity. Both genes displayed a low codon usage bias, with HA higher than NA. The codon usage was driven by mutation pressure and natural selection, although the main contributing factor was natural selection. Additionally, the codon adaptation index (CAI) and deoptimization (RCDI) illustrated the strong adaptability of H7N9 to Gallus gallus. Similarity index (SiD) analysis showed that Homo sapiens posed a stronger selection pressure than Gallus gallus. Thus, we assume that this may be related to the gradual adaptability of the virus to human. In addition, the host strong selection pressure was validated based on CpG dinucleotide content. In conclusion, this study analyzed the usage of codons of two genes of H7N9 and expanded our understanding of H7N9 host specificity. This aids into the development of control measures against H7N9 influenza virus. View Full-Text
Keywords: H7N9; codon usage bias; HA gene; NA gene; host specificity H7N9; codon usage bias; HA gene; NA gene; host specificity
►▼ Show Figures 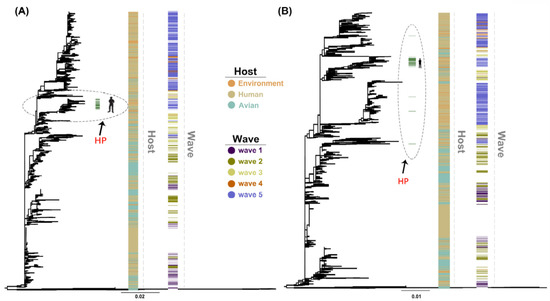