The conjugation of hydrophobic group(s) to the polycationic hydrophilic core of the antibiotic drugs aminoglycosides (AGs), targeting ribosomal RNA, has led to the development of amphiphilic aminoglycosides (AAGs). These drugs exhibit numerous biological effects, including good antibacterial effects against susceptible and multidrug-resistant bacteria due to the targeting of bacterial membranes. In the first part of this review, we summarize our work in identifying and developing broad-spectrum antibacterial AAGs that constitute a new class of antibiotic agents acting on bacterial membranes. The target-shift strongly improves antibiotic activity against bacterial strains that are resistant to the parent AG drugs and to antibiotic drugs of other classes, and renders the emergence of resistant Pseudomonas aeruginosa strains highly difficult. Structure–activity and structure–eukaryotic cytotoxicity relationships, specificity and barriers that need to be crossed in their development as antibacterial agents are delineated, with a focus on their targets in membranes, lipopolysaccharides (LPS) and cardiolipin (CL), and the corresponding mode of action against Gram-negative bacteria. At the end of the first part, we summarize the other recent advances in the field of antibacterial AAGs, mainly published since 2016, with an emphasis on the emerging AAGs which are made of an AG core conjugated to an adjuvant or an antibiotic drug of another class (antibiotic hybrids). In the second part, we briefly illustrate other biological and biochemical effects of AAGs, i.e., their antifungal activity, their use as delivery vehicles of nucleic acids, of short peptide (polyamide) nucleic acids (PNAs) and of drugs, as well as their ability to cleave DNA at abasic sites and to inhibit the functioning of connexin hemichannels. Finally, we discuss some aspects of structure–activity relationships in order to explain and improve the target selectivity of AAGs. View Full-Text
Keywords: aminoglycosides; amphiphilic; antibacterial; antibiotic; cardiolipin; delivery vehicles; lipopolysaccharides; membranes aminoglycosides; amphiphilic; antibacterial; antibiotic; cardiolipin; delivery vehicles; lipopolysaccharides; membranes
►▼ Show Figures 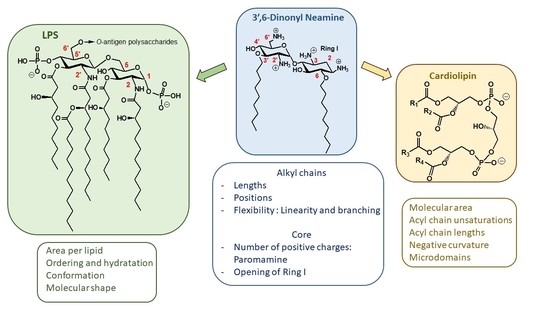