How Perfectionism and Eating Disorder Symptoms Contribute to Searching Weight-Loss Information on the Internet?
Previous Article in Special Issue

Hepatitis B Virus Genotypes in the Kingdom of Bahrain: Prevalence, Gender Distribution and Impact on Hepatic Biomarkers

Background: Approximately 400 million people are infected with Hepatitis B virus (HBV) around the world, which makes it one of the world’s major infectious diseases. The prevalence of HBV genotypes and predictive factors for risk are poorly known in the Kingdom of Bahrain. Objectives: The aim of the present study was to investigate the prevalence of HBV genotypes, its correlation with demographic factor sand impacts on hepatic biomarkers. Materials and Methods: Venous blood samples were collected from 82 HBV positive patients (48 males, 34 females). The extraction of HBV DNA, PCR amplification, and genotyping were done to classify different genotypes (A, A/D, B, B/D, C, D, D/E, E). HBV genotypes association with gender, nationality, mode of transmission, and liver cirrhosis complication was determined by descriptive statistic and univariate analysis of variance (ANOVA). For liver function test, unpaired t-test and ANOVA were performed. Results: The predominant genotype among patients under study was genotype D (61%), followed by genotype A (10%), and lowest frequency was found for undetermined genotype (1%). In general, there was no significant association between the different genotypes and some demographical factors, serological investigations, and liver function test. The prevalence of HBV genotypes was higher in male patients as compared to female patients and higher in non-Bahraini than in Bahraini. Patients with the dominant genotype D showed higher than the normal maximum range for alanine aminotransferase (ALT) (mean = 45.89) and Gamma-glutamyl transferase (GGT) (mean = 63.36). Conclusions: The most common HBV genotype in Bahrain was genotype D, followed by genotype A. Further studies involving the sources of transmission and impact of hepatic biomarker in Bahrain are required to enhance the control measures of HBV infections.
Keywords: prevalence; hepatitis B virus; genotype; bahrain prevalence; hepatitis B virus; genotype; bahrain

Hepatitis B Virus (HBV) is chronically carried by around 400 million people worldwide and about one million die annually as result of developing liver cirrhosis and hepatocellular carcinoma [1,2,3]. The infection is mainly present in Middle East, South-East Asia, sub-Saharan Africa, Central and South-America, and Eastern-Europe with prevalence >8% of population [4]. A migratory flow that had occurred in last twenty years from these countries to the industrialized countries resulted in an increase in HBV prevalence the industrialized countries [1,5]. Between 5 and 10% of infected individuals become chronic carriers in their adulthood, while 85 to 95% in their infancy [6].
Hepatitis B virus is transmitted through blood and body fluids, hence certain types of behaviors increase the risk of infection, such as sharing personal items (toothbrushes, razors, etc.), use of contaminant needles for intravenous drugs or ear pricing and tattooing, and practicing unsafe sex. Hemodialysis and hemophiliacs patients as well as Healthcare and emergency service workers are also at higher risk [7].
HBV genome has a high rate of mutation when compared to other DNA viruses due to the high spontaneous error rate of the viral reverse transcriptase and lack of proofreading mechanism. It is estimated approximately 1.4–3.2 × 10−5 per genome. Accordingly, HBV can be classified into eight genotypes A-H that accounts for 8% or more in the complete nucleotide sequence on inter-sequence divergence [8,9]. Studies on HBV genotypes show a distinct geographical distribution around the world [10]. In general, genotype A is pandemic, but most prevalent in North West Europe, North America, Central Africa [11], and India [8,12]. Genotypes B and C are prevalent in Asia [1,13], especially in the populations of Eastern Asia and the Far East [3]. Genotype D is distributed worldwide with the highest prevalence in the Mediterranean region [3,9,14]. Genotype E and F are predominant in West Africa and in the Amerindian population, respectively [1,9,13]. Recently, genotype G was identified in the USA and France [1]. Genotype H was also recently found in Central America [15]. A remarkable difference in the clinical and virologic characteristics between the patients with different genotypes has been reported [2].
HBV genotypes are reported to be responsible for the differences in the natural history of chronic infection and they play a significant role in clinical manifestation of infection and response to antiviral therapy [16]. Therapeutically, patients that are infected with genotypes A, B, D, and F show frequent spontaneous HBeAg seroconversion when compared to genotype C. Whereas, patients that were infected with genotype E have higher frequency of HBeAg positivity and higher viral loads as compared to patients that were infected with genotype D [17].
Epidemiological data regarding HBV in any country would provide significant information to program managers and health planers to control and manage the infection with reference to its etiological spectrum. In the present study, we aim to determine the prevalence of the various HBV genotypes in the Kingdom of Bahrain. This study also aims to determine various sociodemographic factors and hepatic biomarker associated with the prevalence and the possible risk factors for HBV transmission in Bahrain.

In this cross-sectional study, patients with established chronic hepatitis B infection (positive for HBsAg antigen, HBcAg antibody) referred to Bahrain Defense Force Hospital (second largest hospital in Bahrain) were investigated for HBV genotypes. The major inclusion criterion was testing positive for HBsAg for over six months (chronic infection), with levels of ALT around the normal range. All patients were negative for antibodies against hepatitis C and human immunodeficiency virus.

Statistical analyses were performed while using IBM SPSS Statistics 23 software. For baseline variables, summary statistics employed frequencies data, mean, and standard deviation (SD) for continuous variables. Continuous variables were compared using unpaired t-tests and ANOVA as appropriate. Descriptive Statistics were calculated to determine the prevalence of genotype with respect to data of demographic factors, serology, and other investigations. Univariate analysis of Variance (ANOVA) was applied to determine any significance differences for the genotype and liver function tests.

The local ethics and research committees of Bahrain Defense Force Hospital and University of Bahrain approved this study (approval date 7 September 2017, Project code: 2017/12). It conformed to the provisions of the Declaration of Helsinki in 1964 (and revised in Fortaleza, Brazil, October 2013). All of the patients signed the informed consent form before participation.

Eighty-two HBV positive patients (48 males, 34 females), were screened for the different genotypes A, B, C, D, E and mixed genotype infections A/D, B/D, D/E. The patients in the study were either Bahraini nationals or from other nationalities. The frequency of Bahraini was found to be 53.7% and that of Non-Bahraini was 46.3%. The highest prevalence of HBV infection was shown for the age group 21–30. The lowest prevalence was for the group <21. There was no significance difference between genotype and nationality, gender and age-group (p > 0.05), as shown in Table 1.

3.2. Distribution of HBV Genotypes in the Study Population

For the determination of HBV clinical course, investigating the hepatic biomarkers plays an important role. As increase or decrease in their levels can indicate hepatic disfunction. Bilirubin, Direct Bilirubin (Dbilirubin), Alanine transaminase (ALT), Aspartate aminotransferase (AST), and Gamma-Glutamyl Transferase (GGT) were measured and associated with the different genotypes. Table 4 summaries the mean and SD values in relation to the different genotypes. The maximum and minimum range for these liver function enzymes were stated as: Bilirubin (max. 17, min. 0 umol/L), Dbilirubin (max. 3.4, min. 0 umol/L), AST (max. 37, min. 0 lU/L), ALT (max. 41, min. 0 lU/L), and GGT (max. 49, min. 11 lU/L). Table 4 shows that for Bilirubin value A/D mixed genotype was higher than the max range; for D bilirubin, no genotypes were above or below the normal range, while for AST, ALT, and GGT, the genotypes A, A/D, B, and B/D were all above the normal range.

This study highlighted the importance of hepatic biomarker association with genotypes, which can be used as a base for further studies to investigate such an association. The advantage of this study was to provide a baseline study to draw a good estimate of HBV genotype distribution in Bahrain.

This research was funded by University of Bahrain, Deanship of Scientific Research, grant number [4/2017].

The authors wish to thank all participants in this study and also to thank BDF hospital for collecting clinical samples. The authors would like also to thank Fatema Abdulwaheed Yaqub and Rukaya Abdulghafoor Jalal for their help in HBV genotyping and data entry. Finally, it is our pleasure to acknowledge with gratitude the financial support of University of Bahrain, Deanship of Scientific Research. 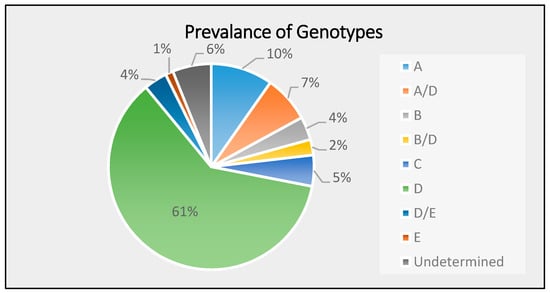 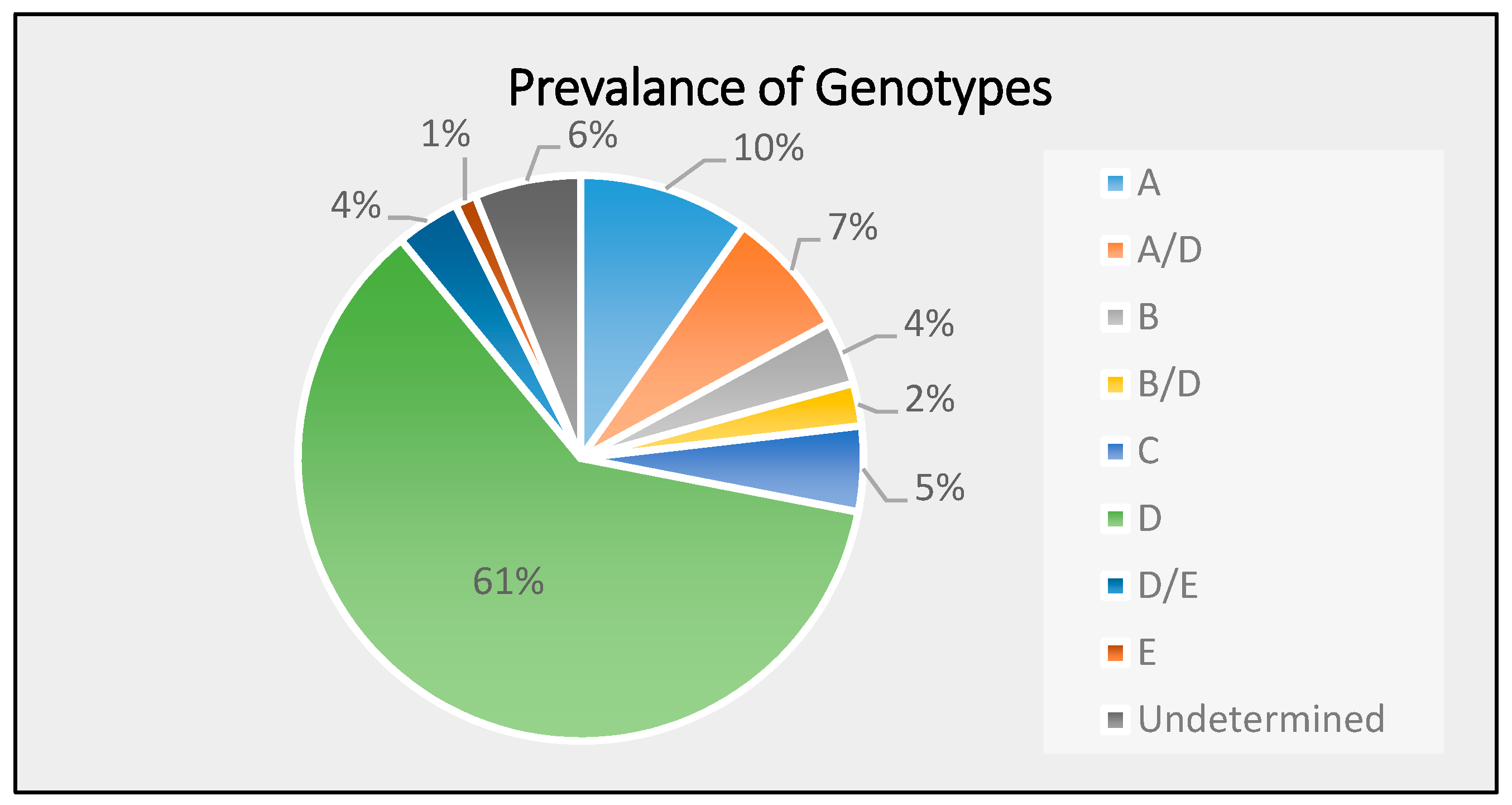