It is well known that cigarette smoking is a major health problem [1]. Smoking is an apparent risk for periodontal disease [2] and oral cancer [3,4]. Oral healthcare professionals, who have relatively long teachable moments with patients, should work toward developing smoking cessation programs in their own clinics.
In 1977, Hedin et al. first reported that smokers showed more pigmented gingiva than non-smokers [5]. They referred to this gingival pigmentation as “smoker’s melanosis”. There is an ethnic difference for gingival melanosis, with a prevalence of 100% in the Black population [6], 40% in the Asian population [7], and 5%–10% in the Caucasian population [8,9]. The pigmentation of the human gingival tissue is derived from melanin granules, which are synthesized in melanosomes of melanocytes [10,11]. The nicotine present in tobacco activates melanocytes to promote melanin secretion [12,13]. Thus, the melanin pigmentation in gingival tissues has a strong correlation with smoking habits [5,14].
A previous study also suggested that the severity of gingival pigmentation decreased after smoking cessation and was related to the number of years after smoking cessation [9,12]. These findings indicate that there is a bi-directional association between tobacco smoking and melanin pigmentation in the gingiva and the possibility of recovery of normal gingival pigmentation by smoking cessation.
Monitoring the gingival color may provide an indicator of the biological reaction to smoking, and may thus be a tool for instruction and supporting smoking cessation. We previously reported the precise measurement of gingival pigmentation with a non-contact type of dental spectrophotometer, and demonstrated the relationship between smoking status and gingival color [15]. However, this procedure requires special equipment. Therefore, we developed a new quantitative method using clinical oral photographs and compared the extent of gingival melanosis before and after smoking cessation with this technique. The purpose of this study was to validate the new quantitative method and to clarify the relationship between smoking cessation and the reduction in gingival melanosis.

Longitudinal clinical oral photographs and treatment records were obtained with patient consent from 16 general dental offices in Japan. Patients who visited these dental offices for regular check-ups and had series of oral photographs were enrolled in this study. Two hundred and eighty-three patients with 900 oral photographs were enrolled in this study; all patients provided their informed consent. To maintain anonymity, patients were given unique ID numbers and the personal information was kept at the clinic. This study protocol was approved by the Ethics Committee for Clinical Research at Fukuoka Dental College (permission number 194).

Gingival pigmentation was measured using frontal oral photographs taken by a non-contact-type dental camera. We employed commonly used digital cameras and standardized photograph taking techniques. All the dentists and dental hygienists were took standardized oral photo taking class. Oral photographs were reviewed with a liquid crystal display (Multi Sync LCD 2490WUXi2, NEC Corp., Tokyo, Japan), and the target site was plotted on the screen. The target site was plotted in the following manner (Figure 1):
(1) A baseline was drawn horizontally on the maxillary gingiva at the crown length of the maxillary right lateral incisor.
(2) Between the right and left maxillary canines, a vertical line was drawn from the baseline to the cervical line of each tooth.
(3) Nine points were plotted to separate eight equal parts on the vertical line, and it was adopted that measuring sites were the points in the attached gingiva. To mark the reference mesh on the attached gingiva, we employed Adobe Illustrator. Horizontal lines were placed using the length of the lateral incisor, and divided into nine points, and the vertical lines were placed at mesial and central and distal points of the frontal teeth. These mesh-generating procedures were done with a batch system to avoid the technical assistant's bias and obtain measurement reliability.
(4) The presence of pigmentation at the measuring sites was evaluated and the percentile with pigmentation was calculated for the gingival melanosis record (GMR).
To quantitatively investigate the effect of smoking cessation on gingival melanosis, the patients were divided into the current smoker group and the smoking cessation group. The GMR was used to evaluate the presence or absence of gingival pigment at the assessment sites, and it was represented as a percentage by dividing the pigmented assessment sites by all assessment sites.

To assess the validity of the GMR, we compared the GMR with Hedin’s classification (Figure 2), which is the gold standard of gingival melanosis classification. In addition, intraclass correlation coefficients (ICC) were calculated to assess the GMR reproducibility. ICC (1,1) was used to evaluate repeatability by the same examiner, and ICC (2,1) was used to evaluate stability between examiners. ICC (1,1) was calculated by the results of one evaluator who performed two analyses with the same 20 oral photographs at a one-week interval. ICC (2,1) was calculated by the results of 20 randomly selected oral photographs using GMR and Hedin’s classification analyzed by three dentists.

Statistical analyses were performed using the IBM SPSS Statistics ver. 22.0 software package (International Business Machines Corp., Armonk, NY, USA). The relationship between the GMR and Hedin’s classification was analyzed using Spearman’s rank correlation coefficient. Differences in the change in the GMR between the current smoker group and the smoking cessation group were analyzed by the Mann-Whitney U test. In addition, the relationship between duration of smoking cessation and the GMR was analyzed with Spearman’s rank correlation coefficient. The significance level was set at 5%.

The characteristics of the study subjects are shown in Table 1. Two hundred and sixty-three patients (mean age 45.9 years; range 19–75 years, 134 current smokers and 129 former smokers) who attended the baseline examination completed this study. Due to unreadable photographs or the absence of routine checkups, 20 patients were excluded in this study. No statistically significant differences between the current smokers and former smokers were observed regarding the baseline characteristics or GMR.

We gratefully thank the members and staff of the Japan Health Care Dental Association for providing and formatting the oral photographs and records. We also express our appreciation to Hidetoshi Akimoto for coordinating the survey. Part of this work was supported by a Grant-in-Aid for Young Scientists (B: No. 26861826) from the Japan Society for the Promotion of Science. 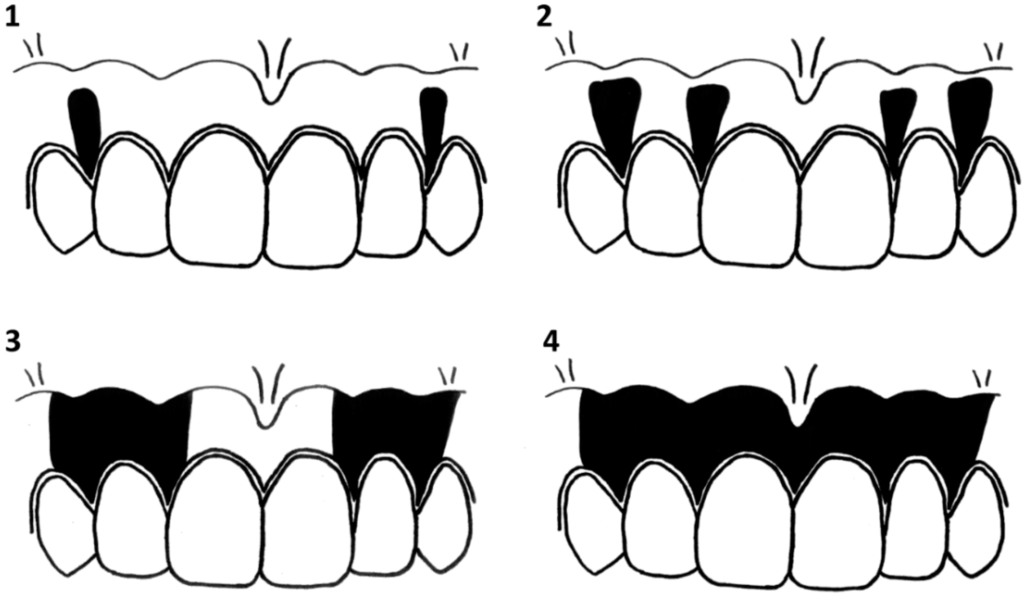 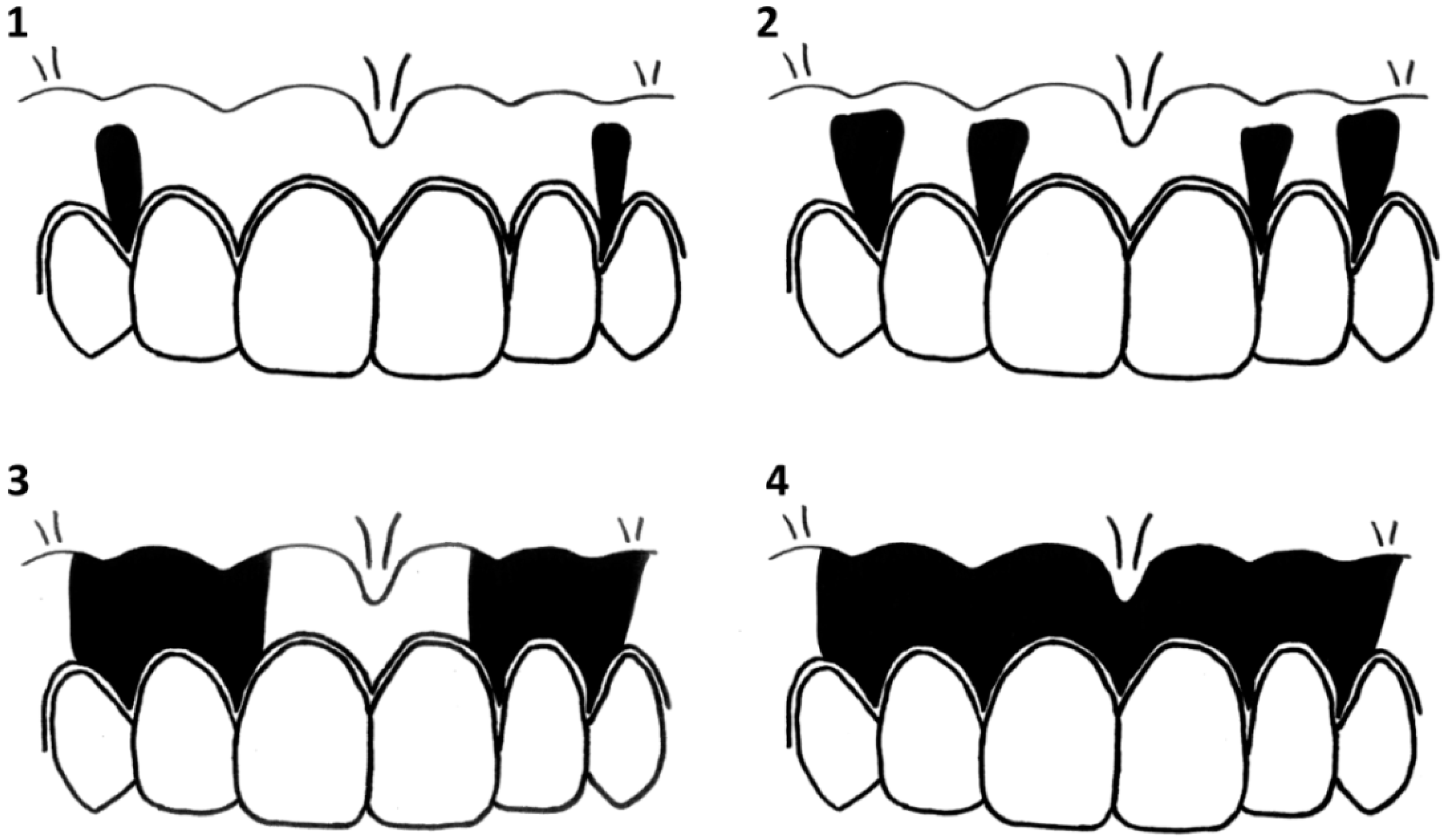 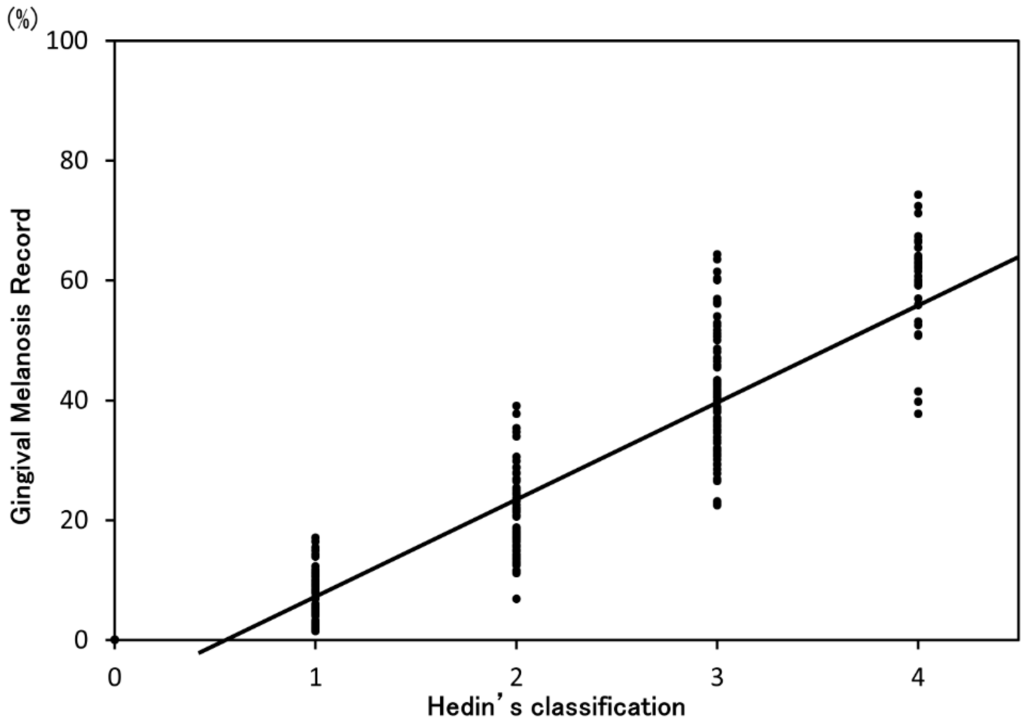 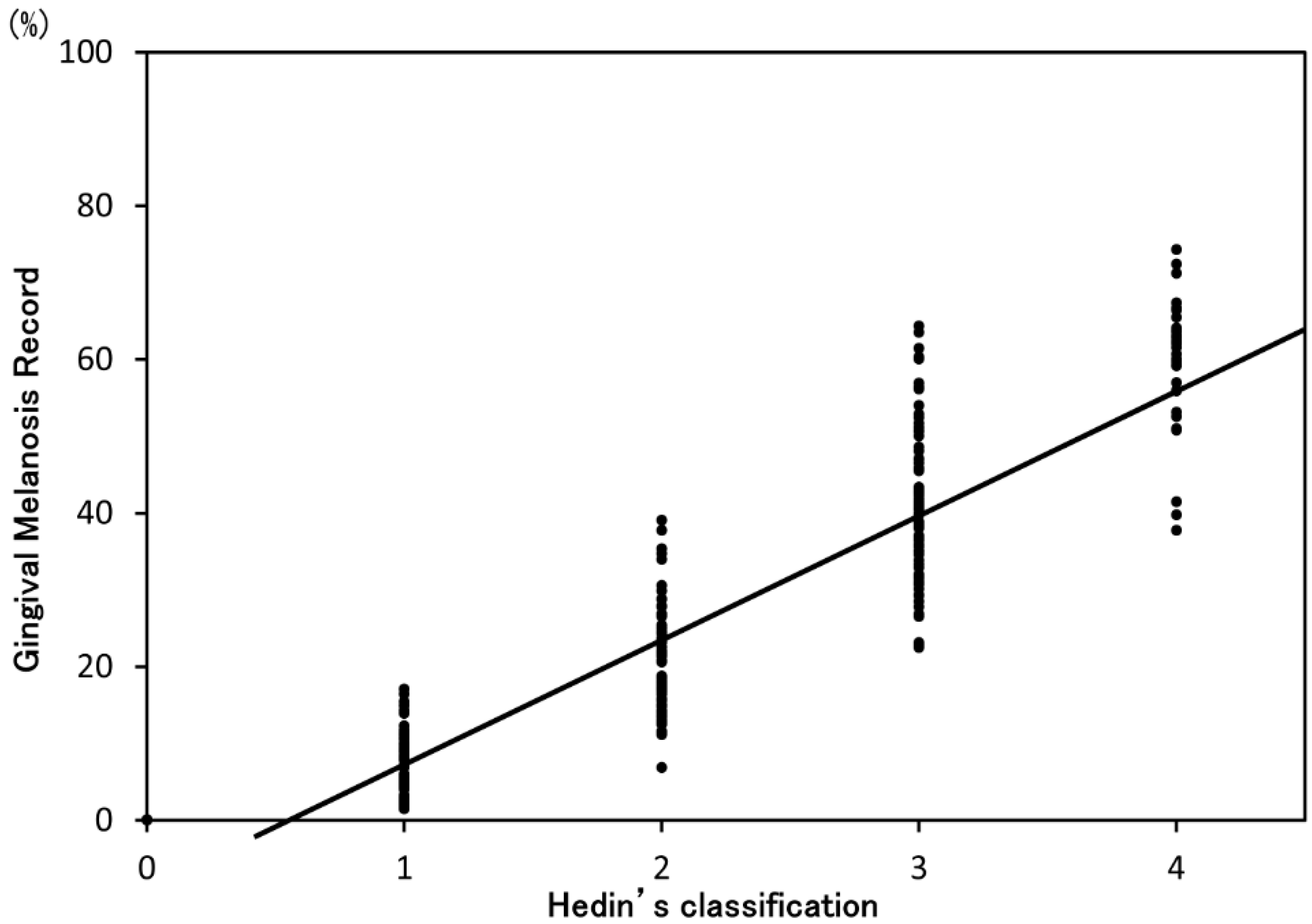 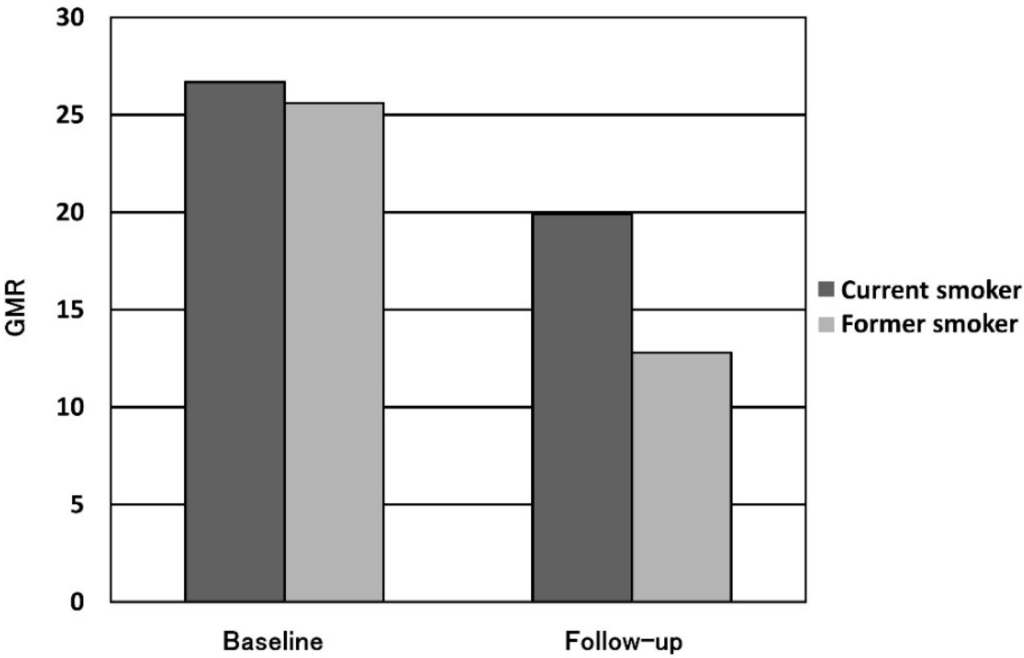 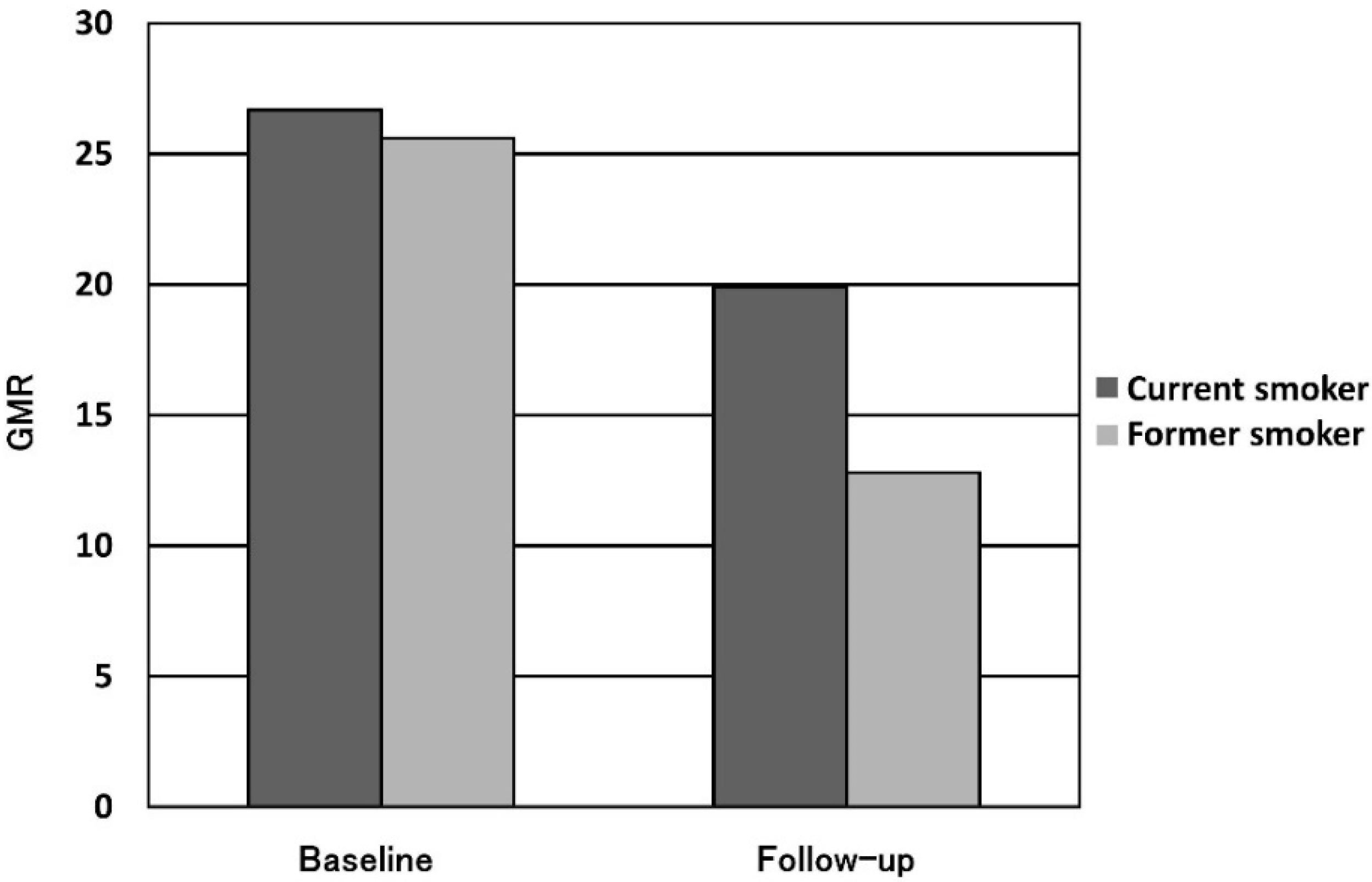 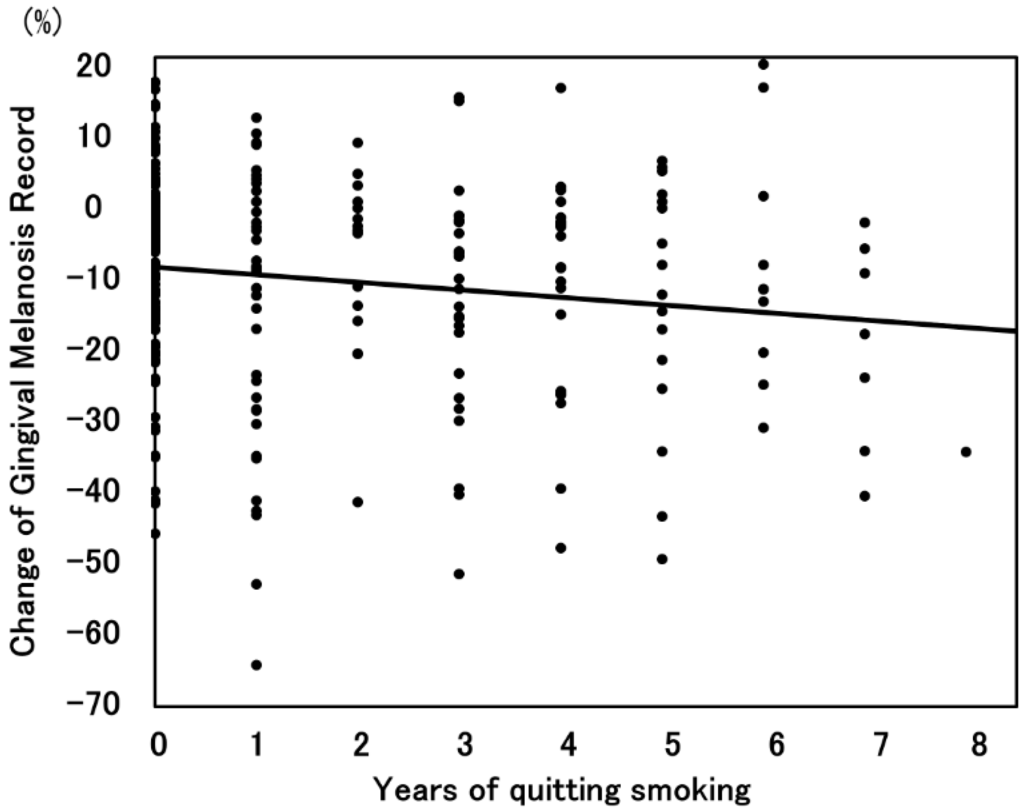 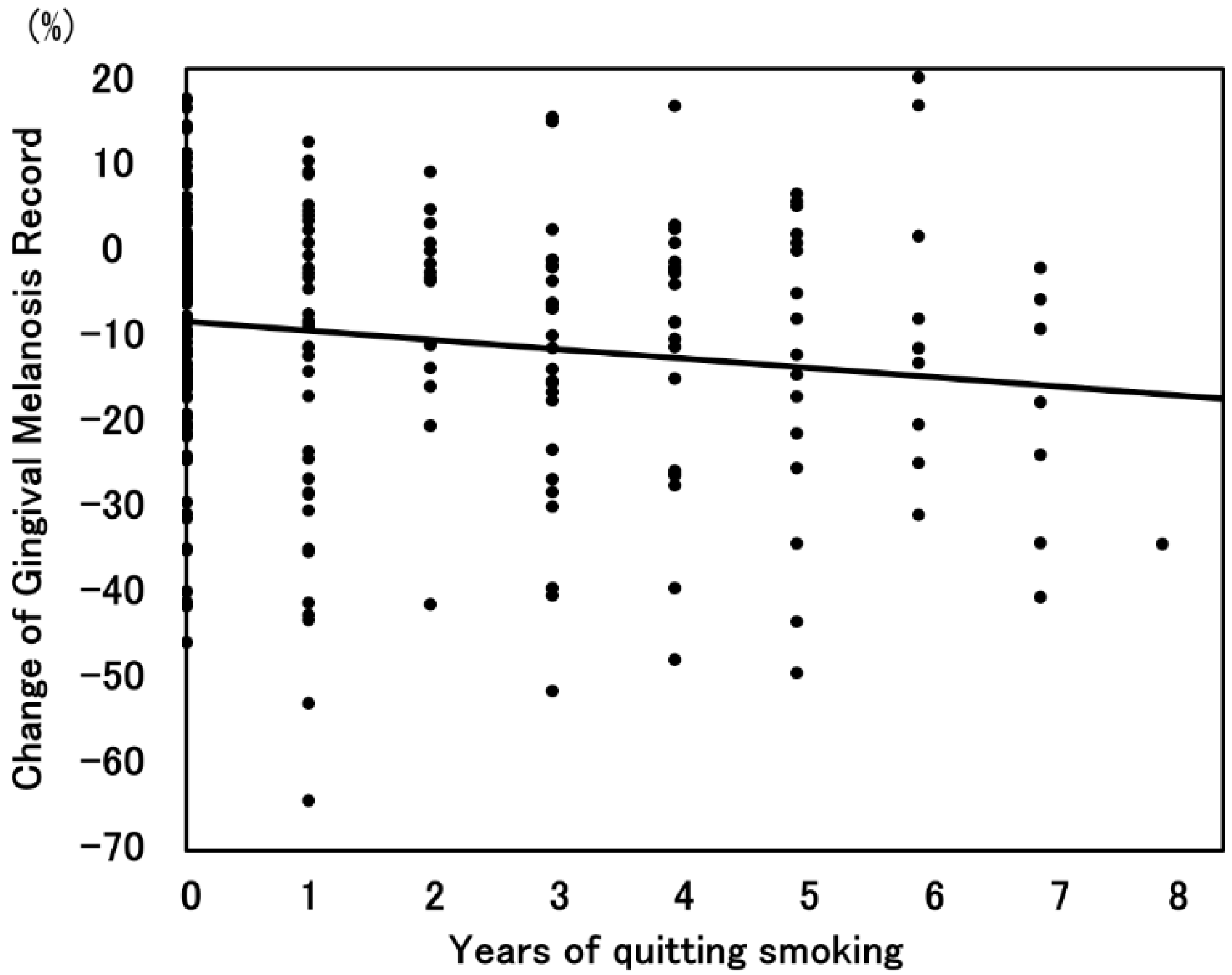