Susceptibility to Alcohol Hangovers: The Association with Self-Reported Immune Status

Increasing evidence points at a role for the immune system in the genesis of the alcohol hangover. This study investigated the association between self-reported immune function and experiencing hangovers. Dutch students aged 18 to 30 years old were invited to complete an online survey. Eighteen items on immune-related complaints were completed to assess self-reported immune function. Alcohol consumption in the past month (with respect to usual consumption and the occasion of heaviest drinking) was also recorded. Subjects with an estimated blood alcohol concentration (eBAC) of 0.18% or higher on their heaviest drinking occasion in the prior month were included in the analyses. Self-reported immune function was compared between drinkers with a hangover and those who claimed to be hangover resistant. In total, of 481 subjects (79.2% women) with a mean (SD) age of 21.1 (1.9) years old were included in the analysis. Of these, 83.3% (n = 400) reported having hangovers and 16.8% (n = 81) claimed to be hangover resistant. Drinkers with hangovers had significantly higher self-reported overall immune function scores when compared to hangover-resistant drinkers (mean ± SD = 10.5 ± 3.6 versus 13.1 ± 4.9, p = 0.0001), indicating a poorer immune status. In conclusion, experiencing alcohol hangovers is associated with significantly poorer self-reported immune function. View Full-Text
Keywords: alcohol; hangover; resistance; immune function alcohol; hangover; resistance; immune function
►▼ Show Figures 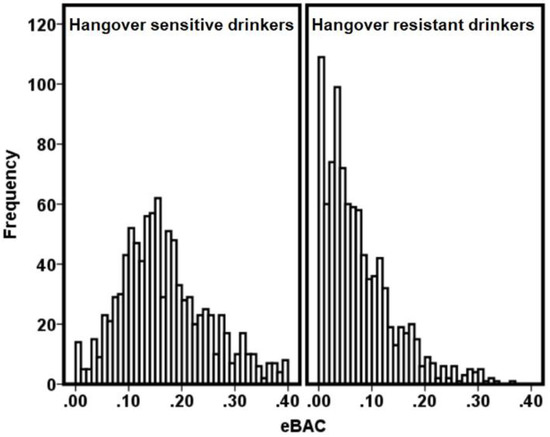