A better understanding of anthropogenic trace metal accumulation in farmland soils is crucial for local food safety and public health, especially for a rapidly industrializing region. In this study, soil samples at two depths were collected from a typical county in East China and analyzed for total concentrations of Fe, Al, Pb, Cd, Cu, Zn, Cr, and Ni. Results showed that trace metals like Pb, Cd, Cu, Zn, Cr, and Ni have accumulated in the regional farmlands, with average topsoil concentrations 1.62–1.77 times higher than their background concentrations in subsoil. However, they were still much lower than the limits of the Chinese Environmental Quality Standard for Soils. By the proper calculation of enrichment factor (EF), it was found that the accumulations of trace metals in the topsoil have been impacted by anthropogenic activities, which could contribute up to 40.83% of total metal concentration. Two principal components were extracted according to the results of principal component analysis (PCA) for EF values, which indicated two important anthropogenic trace metal sources. With the help of spatial distribution maps based on geographical information system (GIS), the anthropogenic sources of Pb, Cr, and Ni were determined to be mostly associated with atmospheric deposition from the central urban area. However, Cd, Cu, and Zn were further confirmed to originate from different agricultural sources. The anthropogenic Cu and Zn inputs were mostly related to pig manure application in the rural northern and southeastern areas, while extensive fertilizer application was identified as the major contributor to anthropogenic Cd accumulation in this region. Overall, the integrated application of EF, PCA, and GIS mapping is an effective approach to achieve the spatial assessment of anthropogenic impact on trace metal accumulation in regional soils. View Full-Text
Keywords: trace metals; anthropogenic impact; spatial distribution; enrichment factor; principal component analysis trace metals; anthropogenic impact; spatial distribution; enrichment factor; principal component analysis
►▼ Show Figures 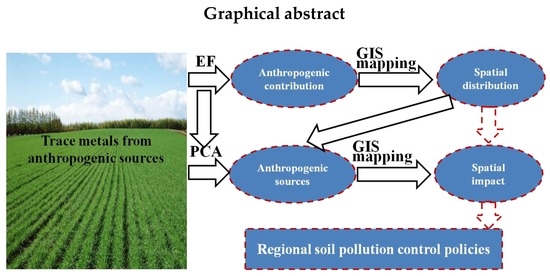