Gastronomic Motivations and Perceived Value of Foreign Tourists in the City of Oruro (Bolivia): An Analysis Based on Structural Equations
Next Article in Special Issue

The Contribution of Spanish Science to Patents: Medicine as Case of Study

Investments in research and development (R&D) and innovation are expensive, and one wishes to be assured that there is positive feedback and to receive guidance on how to direct investments in the future. The social or economic benefits of investments in R&D are of particular interest to policymakers. In this regard, public expense in research, especially through universities, is sometimes being questioned. This paper establishes a measure of how research in Spain, and specifically in its universities, is involved. In this study, we have analyzed all the literature cited in the period 1998–2018 produced by Spanish institutions and which has been cited in at least one international patent, obtaining more than 40,000 publications from more than 160,000 different authors. The data have been surprisingly positive, showing that practically all public universities contribute to this subject and that there is a great deal of international collaboration, both in terms of the number of countries with which they collaborate and the prestige of the institutions involved. Regarding the specific scientific fields in which this collaboration is most relevant, biochemistry, genetics and molecular biology, and medicine together account for almost 40% of the total works. The topics most used by these publications were those of diseases or medical problems such as: Neoplams, Carcinoma, Alzheimer Disease, or human immunodeficiency virus (HIV-1). Oncology was according to the All Science Journal Classification (ASJC) the leading and central issue. Therefore, although the result of basic research is difficult to quantify, when it is observed that there is a return in fields such as medicine or global health, it can be said that it is well employed. In terms of journals from a purely bibliometric point of view, it has been observed that some journals do not have a great impact or relative position within their categories, but they do have a great relevance in this area of patent support. Therefore, it would be worthwhile to set up a rank for scientific journals based on the citations of patents, so the percentage of articles cited in patents with Field-Weighted Citation Impact (FWCI) >1, and as an indicator of scientific transfer from universities or research centres, the transference index in patents (TIP) is also proposed. View Full-Text
Keywords: Scival; patents; Spain; bibliometrics; Research and Development (R& D); social returns Scival; patents; Spain; bibliometrics; Research and Development (R& D); social returns
►▼ Show Figures 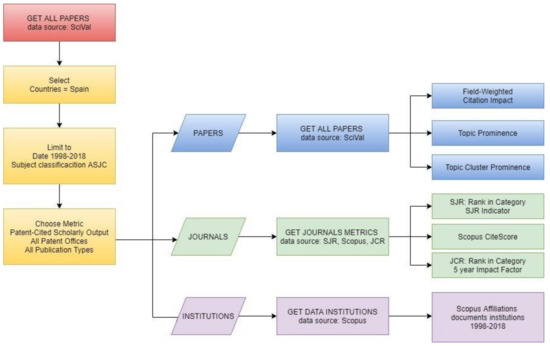 
Cascajares, Mila, Alfredo Alcayde, José A. Garrido-Cardenas, and Francisco Manzano-Agugliaro. 2020. "The Contribution of Spanish Science to Patents: Medicine as Case of Study" International Journal of Environmental Research and Public Health 17, no. 10: 3638. https://0-doi-org.brum.beds.ac.uk/10.3390/ijerph17103638