Short-Term Effect of Air Pollution on Tuberculosis Based on Kriged Data: A Time-Series Analysis
Previous Article in Journal

Statistical Modeling of the Early-Stage Impact of a New Traffic Policy in Milan, Italy

Quantifying the Health Burden Misclassification from the Use of Different PM2.5 Exposure Tier Models: A Case Study of London

Exposure to PM2.5 has been associated with increased mortality in urban areas. Hence, reducing the uncertainty in human exposure assessments is essential for more accurate health burden estimates. Here, we quantified the misclassification that occurred when using different exposure approaches to predict the mortality burden of a population using London as a case study. We developed a framework for quantifying the misclassification of the total mortality burden attributable to exposure to fine particulate matter (PM2.5) in four major microenvironments (MEs) (dwellings, aboveground transportation, London Underground (LU) and outdoors) in the Greater London Area (GLA), in 2017. We demonstrated that differences exist between five different exposure Tier-models with incrementally increasing complexity, moving from static to more dynamic approaches. BenMap-CE, the open source software developed by the U.S. Environmental Protection Agency, was used as a tool to achieve spatial distribution of the ambient concentration by interpolating the monitoring data to the unmonitored areas and ultimately estimating the change in mortality on a fine resolution. Indoor exposure to PM2.5 is the largest contributor to total population exposure concentration, accounting for 83% of total predicted population exposure, followed by the London Underground, which contributes approximately 15%, despite the average time spent there by Londoners being only 0.4%. After incorporating housing stock and time-activity data, moving from static to most dynamic metric, Inner London showed the highest reduction in exposure concentration (i.e., approximately 37%) and as a result the largest change in mortality (i.e., health burden/mortality misclassification) was observed in central GLA. Overall, our findings showed that using outdoor concentration as a surrogate for total population exposure but ignoring different exposure concentration that occur indoors and time spent in transit, led to a misclassification of 1174–1541 mean predicted mortalities in GLA. We generally confirm that increasing the complexity and incorporating important microenvironments, such as the highly polluted LU, could significantly reduce the misclassification of health burden assessments. View Full-Text
Keywords: PM2.5; population exposure; tier-models; health burden misclassification; BenMap-CE PM2.5; population exposure; tier-models; health burden misclassification; BenMap-CE
►▼ Show Figures 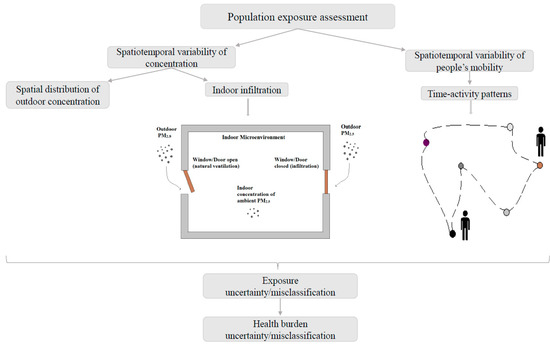 
Kazakos, Vasilis, Zhiwen Luo, and Ian Ewart. 2020. "Quantifying the Health Burden Misclassification from the Use of Different PM2.5 Exposure Tier Models: A Case Study of London" International Journal of Environmental Research and Public Health 17, no. 3: 1099. https://0-doi-org.brum.beds.ac.uk/10.3390/ijerph17031099