Modern bioelectrical impedance analysis (BIA) provides a wide range of body composition estimates such as fat mass (FM), lean body mass (LBM), and body water, using specific algorithms. Assuming that the fat free mass (FFM) and LBM can be accurately estimated by the 8-electrode BIA analyzer (BIA8MF; InBody230, Biospace), the bone mineral content (BMC) may be calculated by subtracting the LBM from the FFM estimates based on the three-compartment (3C) model. In this cross-sectional study, 239 healthy Taiwanese adults (106 male and 133 female) aged 20–45 years were recruited for BIA and dual-energy X-ray absorptiometry (DXA) measurements of the whole body and body segments, with DXA as the reference. The results showed a high correlation between BIA8MF and DXA in estimating total and segmental LBM, FM and percentage body fat (r = 0.909–0.986, 0.757–0.964, and 0.837–0.936, respectively). For BMC estimates, moderate to high correlations (r = 0.425–0.829) between the two methods were noted. The percentage errors and pure errors for BMC estimates between the methods ranged from 33.9% to 93.0% and from 0.159 kg to 0.969 kg, respectively. This study validated that BIA8MF can accurately assesses LBM, FM and body fat percentage (BF%). However, the estimation of segmental BMC based on the difference between FFM and LBM in body segments may not be reliable by BIA8MF.
Keywords: BIA; bone mineral content; DXA; segment; multi-frequency; three-compartment BIA; bone mineral content; DXA; segment; multi-frequency; three-compartment

Body composition is closely related to human physiology and disease, and has a wide range of applications in nutrition, exercise physiology, medicine, geriatrics, and fitness [1,2,3,4]. The most commonly used methods of measuring body composition are hydrodensitometry, air displacement plethysmography, bioelectrical impedance analysis (BIA), and dual-energy X-ray absorptiometry (DXA) [5]. In recent years, BIA has been widely used in clinical practice, in epidemiological studies, and by individuals on a personal basis, because it is non-invasive, simple to perform, and convenient. Basically, BIA measures the electrical impedance of the water compartment to the flow of either single or multi-frequency currents. However, the human body is not a homogeneous cylinder, and body composition estimation from the impedance requires a number of assumptions and a specific regression equation for the target population [6,7]. DXA is a three-compartment model of body composition analysis [8]. During the analysis, the body is scanned with X-rays of two different levels of energy. Therefore, the DXA scanner is originally designed to separate the body into two components of known X-ray attenuation coefficients. With the application of specific soft tissue algorithms to assume the lean-to-fat fraction, the DXA scanner is able to partition the human body into the fat, lean, and bone components [9,10]. DXA, with high accuracy and precision, is commonly used as a reference method for developing and validating BIA equations [7] Redistribution of the body fluid affects body impedance and influences the accuracy of BIA measurements. It is generally agreed that BIA measurements should be taken after the subjects in the testing positions (supine or standing) for at least 10 min to avoid gravity-related shifts in body fluid [11,12]. Standing BIA devices do not require subjects to lie down on the bed prior to measurement and application of adhesive electrodes; and therefore, are more convenient and comfortable than supine BIA models.
Bone mineral contents (BMC) may change due to aging, physical training or disease processes, with varying degrees across body segments. In postmenopausal women, there is a reduction in total body bone mass, with axial bone predominance [13,14]. Athletes build bone mass in different body regions and at different rates depending on the type and intensity of their training [15,16]. It is known that the BMC of the extremity is positively correlated with muscle strength and may have an impact on athletic performance [17]. DXA is the gold standard for measuring total body and regional BMC, but has the disadvantages of radiation exposure and less availability. Similar to DXA, commercial octopolar BIA is also a body composition method providing estimates in the total body and body, enabling faster, cheaper and safer measure for body composition. Estimates of body fat percentage (BF%), fat mass (FM), fat free mass (FFM), and lean body mass (LBM) have been validated in the total body [18,19] and in body segments [20,21,22]. However, less is known about the estimation of BMC by BIA.
BIA has been used to estimate total body BMC. However, no published research to date has investigated the application of the BIA method in measuring the limb BMC. We assumed that the BMC can be obtained after subtracting the lean and fat masses from the total body weight, based on the human three-component model, and validated the BMC measure at each limb. BIA is currently applied to measuring the muscle, fat, and water. Our study provides validation of whole-body and regional BMC estimates so that BIA can be used in general and clinical applications in the future.
The logical of BMC calculus is that BMC is the subtraction of FFM and LBM and with the premise assumption of both FFM and LBM can be accurately measured by BIA. However, less is known about the validity and reliability of BMC measured by BIA [23]. Stone et al. [24] concluded that using single-frequency hand-to-foot BIA to measure BMC would be inappropriate for diagnostic purposes. Recently, it has been suggested that the BIA instrument does not appear to be useful in estimating BMC in healthy children [25]. This study aimed to test the accuracy and agreement of whole body and segmental BMC measurements using a portable 8-electrode multi-frequency BIA (BIA8MF) device using DXA as a three-compartment reference model.

This cross-sectional study was approved by the Institutional Review Board of Chang Gung Memorial Hospital (103–1516B), and all participants provided their written informed consent. Participants were recruited via hospital advertisements and word of mouth between October and December 2014. The study consisted of one clinic visit. Participants were asked to fast overnight for at least 8 h before reporting to the Chang Gung Memorial Hospital (Chiayi branch). Vigorous activities and alcohol were avoided for ≥ 24 h before the study day. On arrival, participants were asked to void and change into a hospital gown. Body weight and height were measured to the nearest 0.1 kg and 0.1 cm, respectively, using a digital scale (Super-View, HW-3050, Taipei, Taiwan). The total study time was approximately 1 h.

The inclusion criteria were healthy Taiwanese adults 20 to 45 years of age. Individuals with a chronic illness, diabetes, hypertension, metal implants, or who were taking any medications were not eligible for participation. Subjects were asked to abstain from vigorous exercise, alcohol, and caffeine in the 48 h before the test, and empty their bladder 30 min beforehand. Subjects were excluded if they had taken medicine that may affect hydration status in the seven days prior to the test. Female subjects were not schedule during menses. Participants are healthy individuals with normal mobility.

Body composition was assessed using a fan-beam DXA scanner equipped with software version 12.5 (Delphi A, Hologic, Bedford, MA, USA), and a dual-frequency (20 kHz and 100 kHz) BIA device (InBody230, Biospace Corp., Seoul, Korea). The test protocols for DXA and BIA8MF are described elsewhere [20]. A qualified DXA technician performed all whole-body scans and analyses using the Hologic Delphi A scanner. All BIA8MF measurements were made by trained research assistants. The body composition measurements provided data on LBM, FM, BF%, and BMC for the total body, trunk, right arm, left arm, right leg, and left leg. BIA8MF did not directly output BMC data. In this study, BMC was the sum calculated by subtracting segments FM and segments LBM from each body segments weight.

The statistical software package SPSS version 19.0 for Windows (SPSS Inc., Chicago, IL, USA) was used for data analysis. All data were normally distributed and presented as means ± standard deviation (SD). Pearson correlation coefficient was used to measure the strength of the association between body composition measures by DXA and BIA8MF. The paired t-test was used to compare 2 means of measurements by DXA and BIA8MF. The pure error (PE) was calculated as the root mean square of the difference between observed and predicted data, as shown below:
Bland-Altman analysis and plotting was used to assess the degree of agreement between DXA and BIA8MF measurements. The mean paired difference (bias), and the limits of agreement (LOA, mean ± 2 SD) were calculated. The bias and LOAs in the Bland-Altman plot were unscaled values based on the original unit, and therefore the LOA% was used to present the level of precision of BIA measurements. The LOA% was calculated as shown below:
The LOA% was also used to describe the level of precision of BIA measurements. Bland-Altman linear regression was used to test the relative agreement between the two methods. The statistical significant level was set at p < 0.05.

This study was funded by the Chang Gung Medical Foundation, grant number CMRPG6D0271.

We would like to thank Chu-Jung Hsieh and I-Chin Wu for their help and advice at the start of the project. 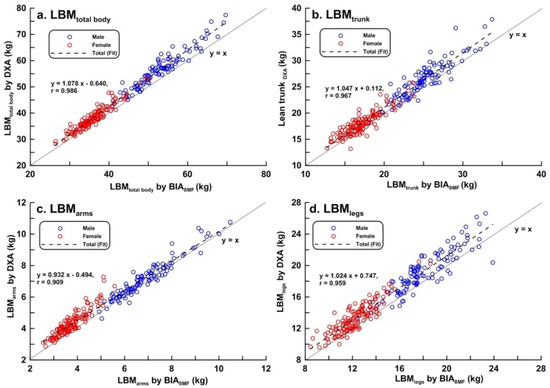 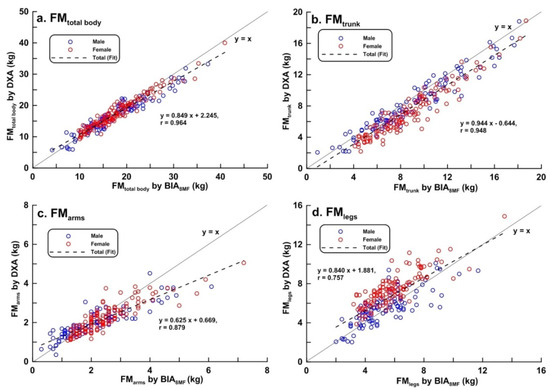 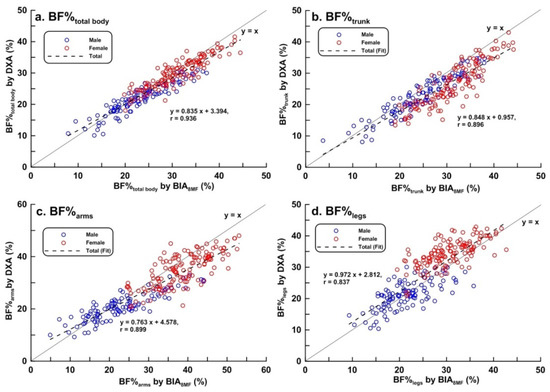