Eutrophication, associated with discharge of nitrogen and phosphorus into water from point- and nonpoint-sources, has become a severe water pollution problem in many countries [1–3]. Chaohu Lake, one of the five largest freshwater lakes in China, is located in the center of Anhui Province, China (117.16°–117.51° E and 31.43°–31.25° N). Over the last two decades, with the population growth and the rapid economic development in the drainage area, nutrient-rich effluents have increasingly discharged into the lake [1]. This has resulted in severe contamination and eutrophication of this lake [1]. In 2008, Chaohu Lake’s water was moderately polluted, with a nutritional status of moderate eutrophication and the major pollution indicators were total phosphorus, total nitrogen and oil. The pollution was mainly from agricultural land, industrial and domestic wastewater [4]. The spatial variation analyses of surface soil available phosphorous are needed to better understand the distribution and transport of watershed nonpoint-source phosphorus across landscapes to better inform how we can manage land use activities such as precision fertilization and nutrient-based agricultural partition management to minimize environmental impacts such as lake eutrophication.
In recent decades, with the development of Geographic Information System (GIS), Global Positioning System (GPS) and Remote Sensing (RS) technology, the spatial distribution of soil available phosphorus as an important soil quality indicator has gradually become an international research focus and it has been introduced into the agricultural resources and ecological management by a variety of governments in many counties including China. Today different geostatistical and GIS spatial analysis techniques are used widely for prediction of spatial variations of the soil properties [5–8]. Robinson and Metternicht used three different techniques including Inverse Distance Weight (IDW), cokriging, and spline methods for predicting the level of soil salinity, acidity and organic matter in South West of Australia and the results showed that the cokriging and spline methods were the best techniques for estimation of the soil salinity level and organic matter content, results also showed that the IDW method was suitable for prediction of soil acidity level [5,9]. Yamashita et al. investigated the seasonal and spatial variation of nitrogen dynamics in the litter and surface soil layers along a slope in a tropical dry evergreen forest in northeastern Thailand [10]. Zhang et al. examined the spatial patterns of soil nutrient (N and P) using geostatistical analysis in three different soil horizons (A, B, C) in a mixed forest in Beijing China [11].Vaughan et al. quantified the spatial variation of surficial (0–5 cm) soil P within vegetated agricultural ditches on a farm in Princess Anne, MD with an approximately 30-year history of poultry litter application [12]. Corazza et al. studied the spatial variability of soil phosphorus content of a Rhodic Ferralsol in a low productivity pasture of Brachiaria brizantha (BB) grown for 10 years, without fertilizer application, in an experimental area at Planaltina (GO), Brazil [13]. Lin et al. evaluated the phosphorus storage and the phosphorus density of paddy soils and characterized the spatial variations of phosphorus among the subgroups of paddy soils and soil regions in China [14]. Grunwald et al. estimated the spatio-temporal patterns of soil total phosphorus (TP) in Water Conservation Area 2A (WCA-2A) in the Greater Everglades (GE) ecosystem and compared two different geostatistical methods: ordinary kriging (OK) and conditional sequential Gaussian simulation (CSGS), addressing spatial variability, continuity and uncertainty of TP estimations [15]. Page et al. investigated the soil P status, distribution, and variability, both spatially and with soil depth, of two different first-order catchments; and determinied variation in soil P concentration in relation to catchment topography (quantified as the “topographic index”) and critical source areas (CSAs) [16].
However, very little research on the spatial distribution of soil available phosphorus and total phosphorus has been conducted in the Chaohu Lake watershed [17,18]. In this paper, the spatial variation of surface soil available phosphorus and its relationship with environmental factors in the Chaohu Lake watershed were analyzed using statistical methods and GIS spatial analysis techniques.

The Chaohu Lake watershed is located west of Dabie Mountain and north of the Yangtze River in the east China and central Anhui Province (Figure 1). The watershed is wide from east to west and narrow from north to south. Its area extends from 116°23′59″ to 118°22′5″ E and from 30°52′25″ to 32°7′53″ N, and the drainage area of the Chaohu Lake watershed occupies about 13,400 km2, with a water area of about 820 km2. This watershed area is a typical temperate continental monsoon climate type and belongs to subtropical and warm-temperate transitional zone, the yearly mean temperature is between 15 to 16 °C. The annual precipitation is in the 1000–1158 mm, with an average of approximately 1100 mm. Undulating terrain characterizes the topography surrounded by Fu Mountain, Yinping Mountain, and Dabie Mountain. Elevations vary from about 0 to 1,498 m with an average of around 65.76 m. The rivers in the Chaohu Lake watershed show a Chaohu Lake-centered radial distribution because of the terrain conditions. There is a high-density of river networks with a total of thirty-three rivers in the watershed, including Zhigao River, Nanfei River, Paihe River, Hangbu River, Baishishan River, Yuxi River and Zhao River.

Interpolation is a mathematical function that estimates the values at locations where no measured values are available. In this paper, a total of six commonly used spatial interpolation methods, including the deterministic interpolation methods of regularized and tension spline, IDW, and the stochastic method of ordinary kriging with spherical, exponential, Gaussian (or normal distribution) semivariogram model, were used to predict the spatial distribution of soil available phosphorus in the Chaohu Lake watershed based on the soil samples. Spline method interpolates a surface from points using a minimum curvature spline technique, and the regularized option of Spline Type usually produces smoother surfaces than those created with the tension option. With the regularized option, higher values used for the weight parameter produce smoother surfaces. With the tension option, higher values entered for the weight parameter result in somewhat coarser surfaces, but surfaces that closely conform to the control points [20]. IDW method interpolates a surface from points using an inverse distance weighted (IDW) technique [20]. In interpolation with IDW method, a weight is attributed to the point to be measured. The amount of this weight is dependent on the distance of the point to another unknown point [5]. Kriging method interpolates a surface from points using kriging, and kriging is a processor-intensive process. When the kriging method is set to Ordinary, the available semivariogram models are spherical, circular, exponential, Gaussian, and linear [20]. And the grid cell resolution of the predicted soil available phosphorus was 90 meters. Among the eighty-one soil samples, seventy-one random samples (Figure 1) were used for the interpolation, and the remaining ten samples for model validation.
The performance of the six methods was evaluated using true validation including scatter plots and regression statistics, which involved comparison of predictions of soil available phosphorus at the remaining ten samples for model validation with their corresponding observed values. The effectiveness of each method was assessed using five indicators, including the mean of the observed variable (<O>), the mean of the model-predicted variable (<P>), the mean difference (MD), the mean absolute difference (MAD), and the mean absolute percent difference (MAPD) [21,22] as shown in Table 1, from the measured and predicted values.

Subwatersheds were used as basic calculation units for the relation analysis between soil available phosphorus and environment factors including elevation, slope, precipitation, percentage of cultivated land, percentage of forest land, percentage of construction land and NDVI. The data included DEM, precipitation, land use map and NDVI. In this paper, the 90 m SRTM DEM data was used to delineate the subwatersheds in the Chaohu Lake watershed. A watershed analysis on the terrain model for the the Chaohu Lake watershed was performed to generate data on flow direction, flow accumulation, stream definition, stream segmentation, and watershed delineation using hydrology analysis tool. After the above several processing steps and further revised according to DEM and the rivers distribution, 839 small subwatersheds (Figure 1) were obtained based on surface drainage patterns. Then the 839 subwatersheds in the Chaohu Lake watershed were selected as the basic calculation units for each factor. Based on the raster data of environmental factors and soil available phosphorus, their spatial distribution maps were produced using Zonal Statistics Tool which calculated statistics on values of each raster within the 839 subwatersheds. Then the average values of subwatershed scale soil available phosphorus and environment factors were input to SPSS software for further analysis. The relation analysis methods included the correlation analysis, one-way analysis of variance (ANOVA), multiple compare (LSD) and multiple regression analysis.

Based on the study on spatial variation of surface soil available phosphorous and its relation with environmental factors in the Chaohu Lake watershed, the following four conclusions were obtained:

This study is financially supported by the Scientific Research Foundation for Introducing Talents of Nanjing Institute of Geography and Limnology, Chinese Academy of Sciences(Grant number NIGLAS2010QD14) and the Major Science and Technology Program for Water Pollution Control and Treatment (Grant number 2008ZX07526-002-08). 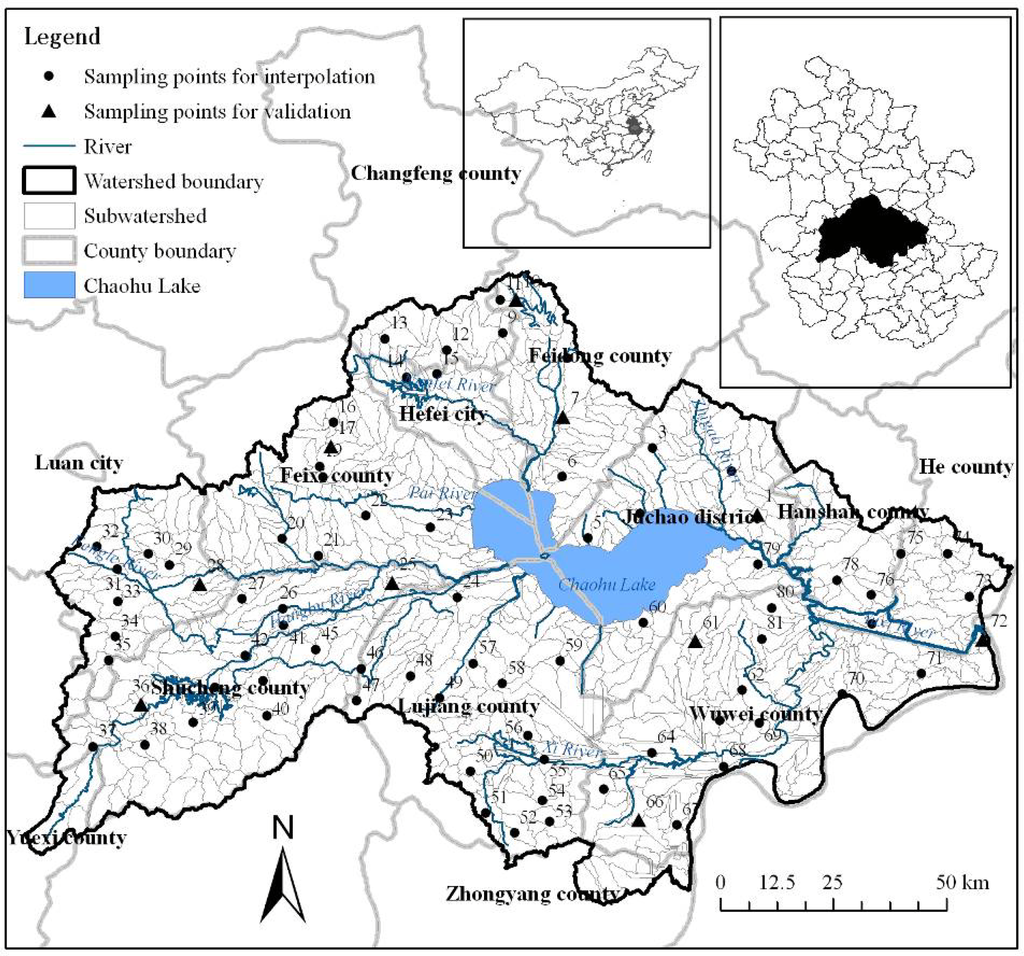 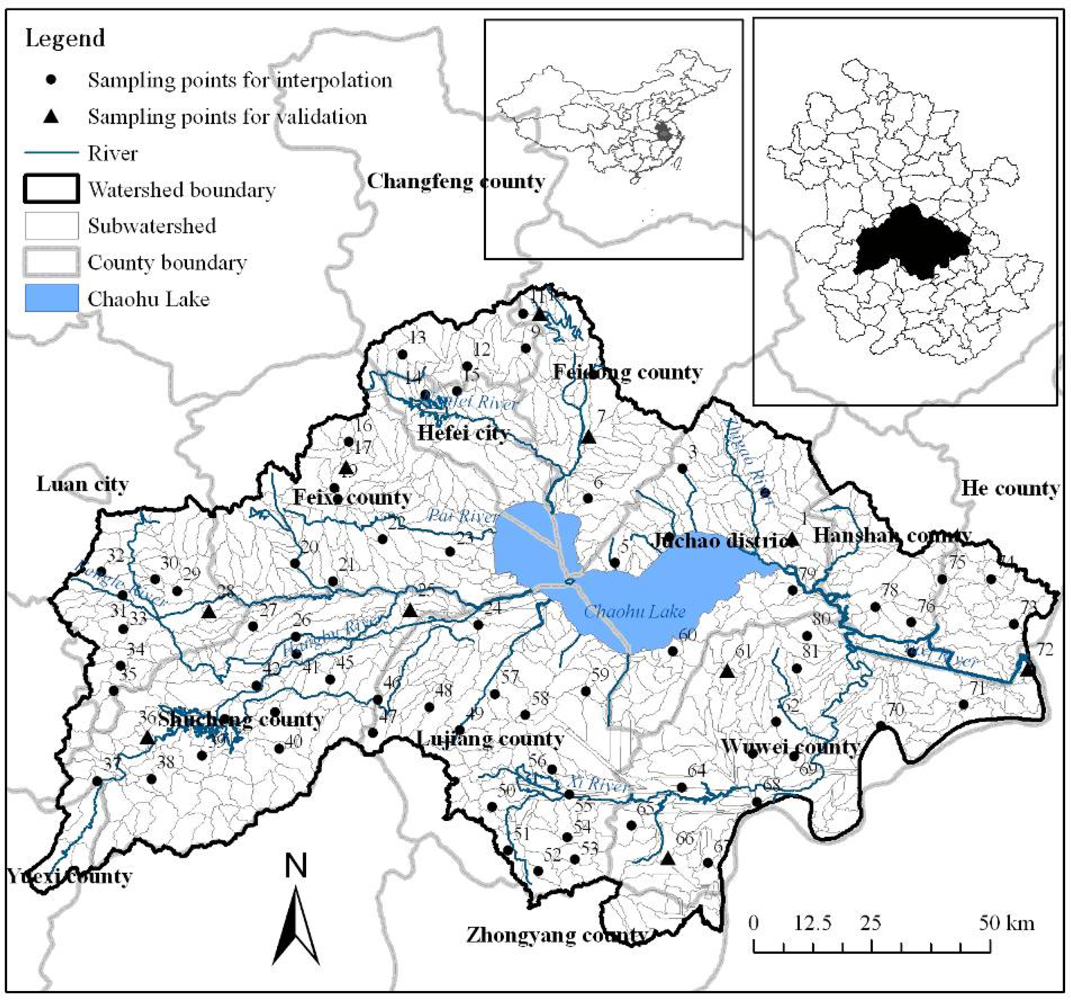 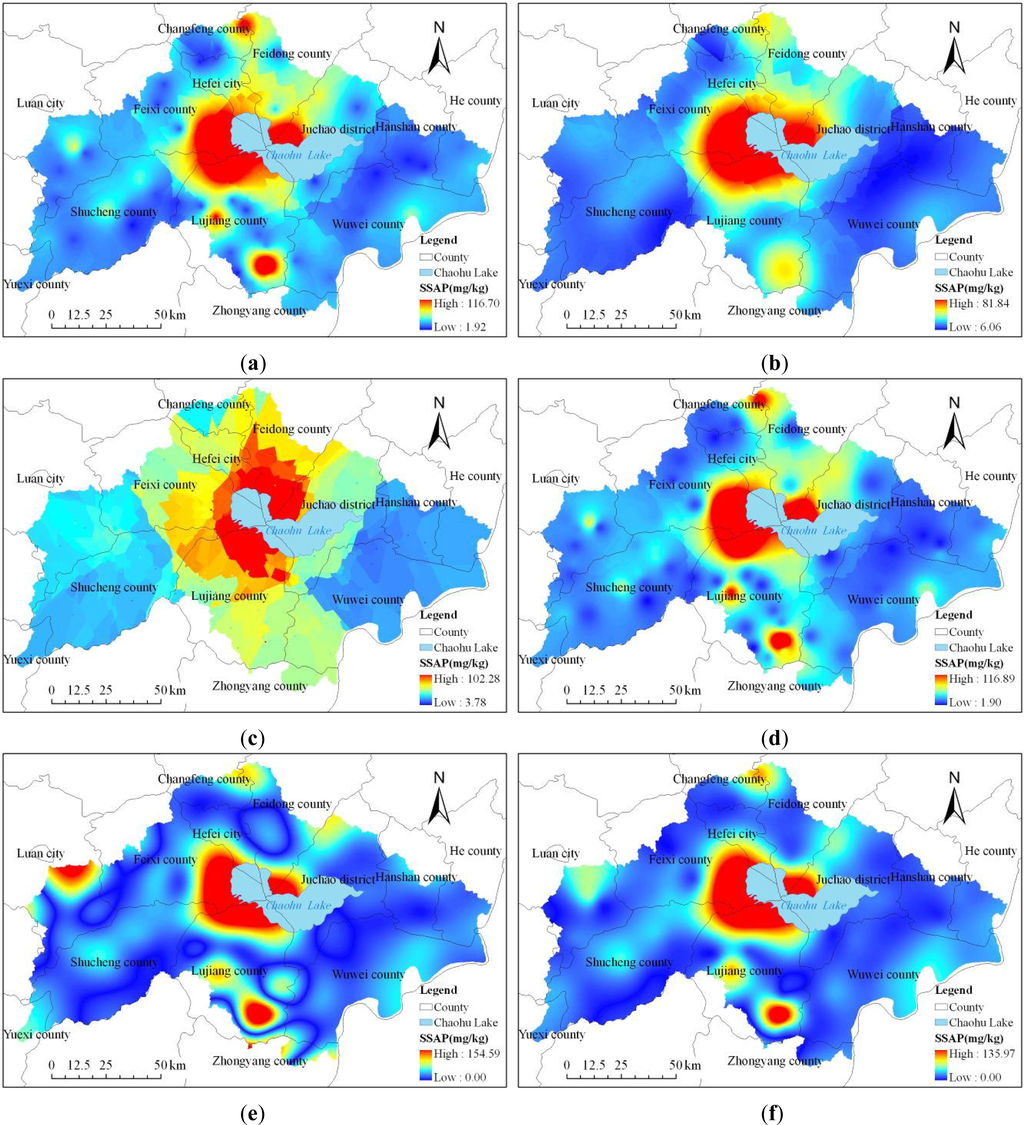 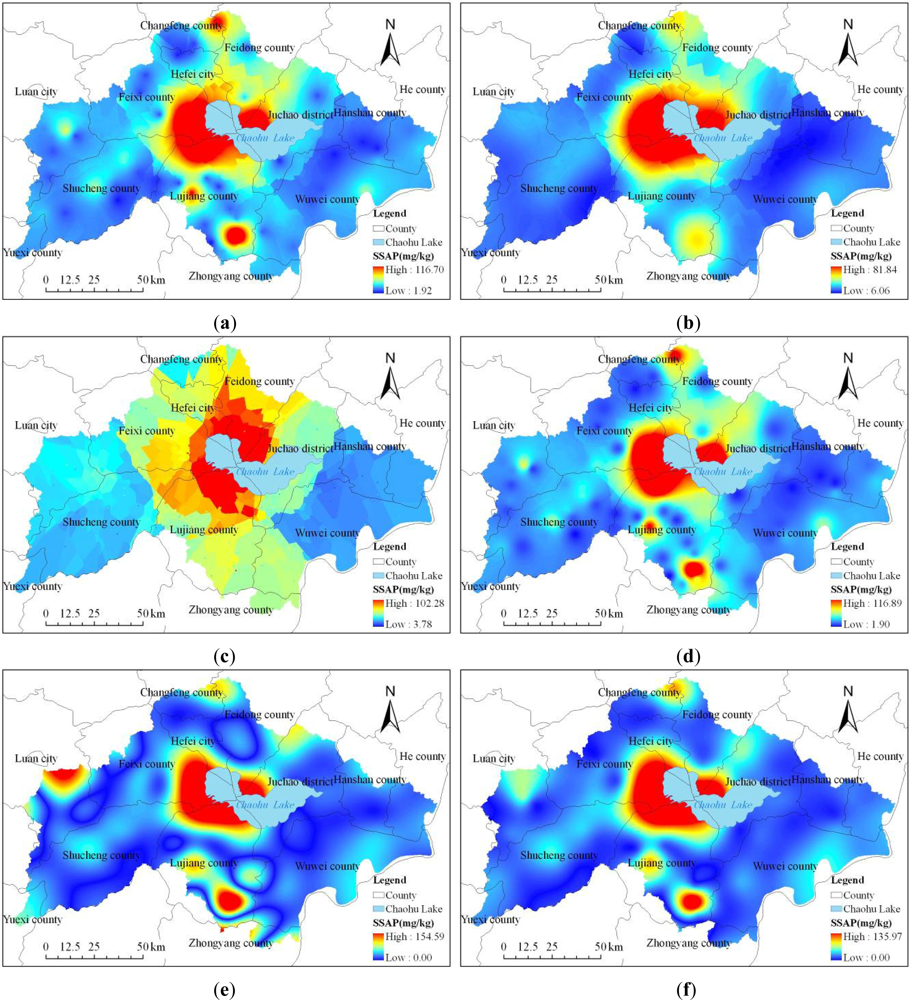 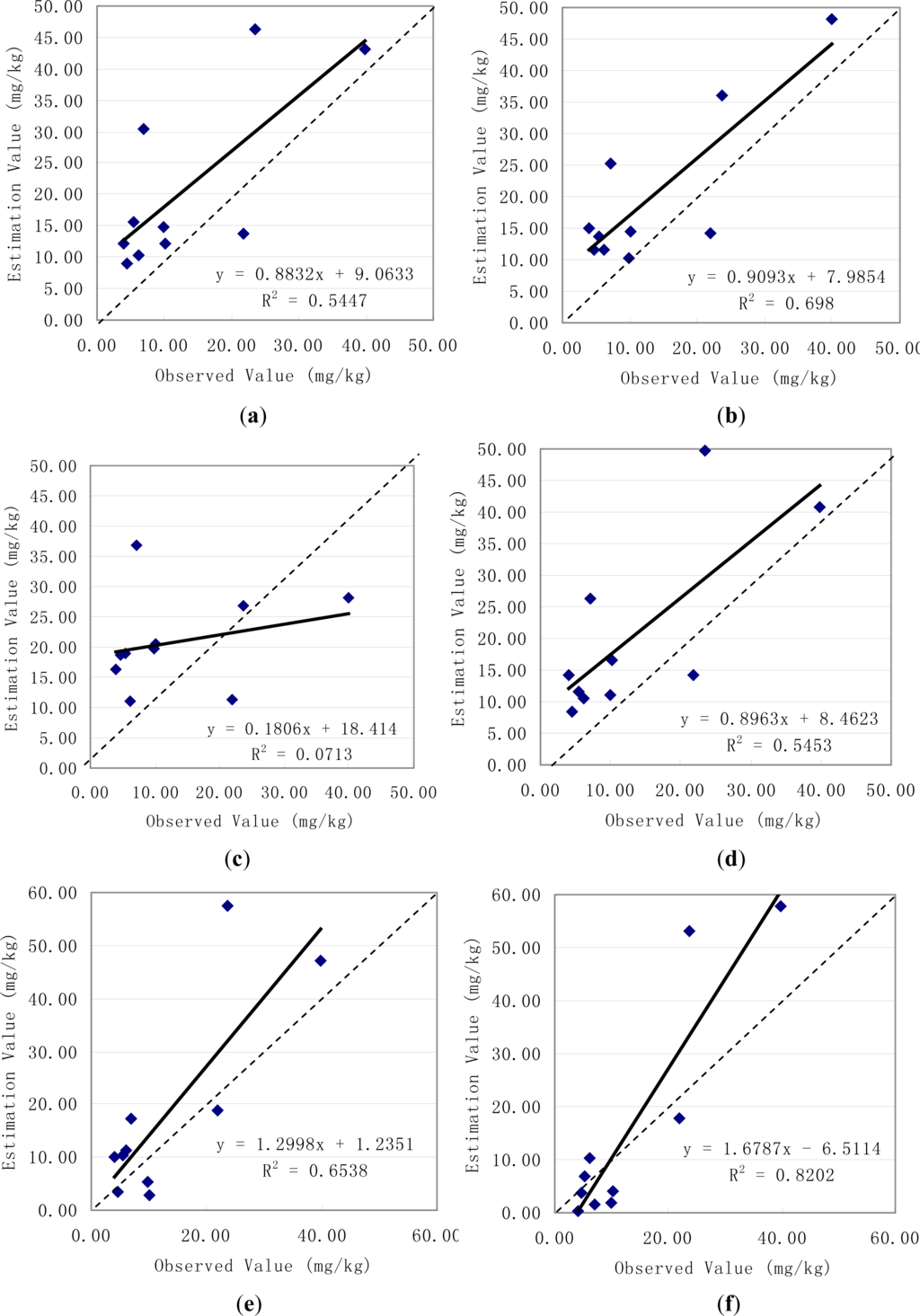 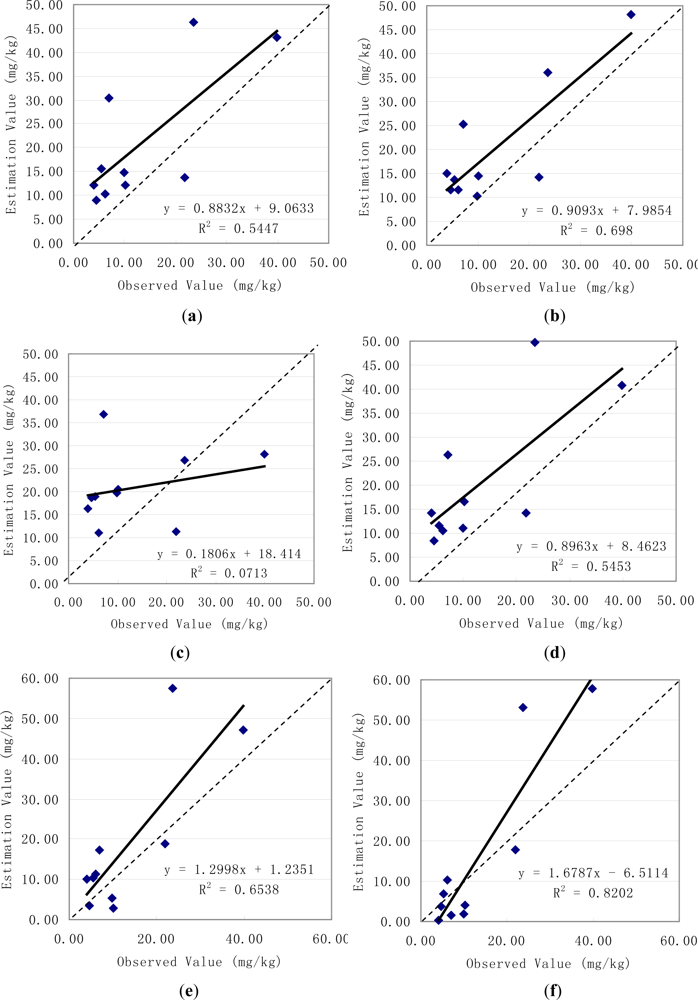 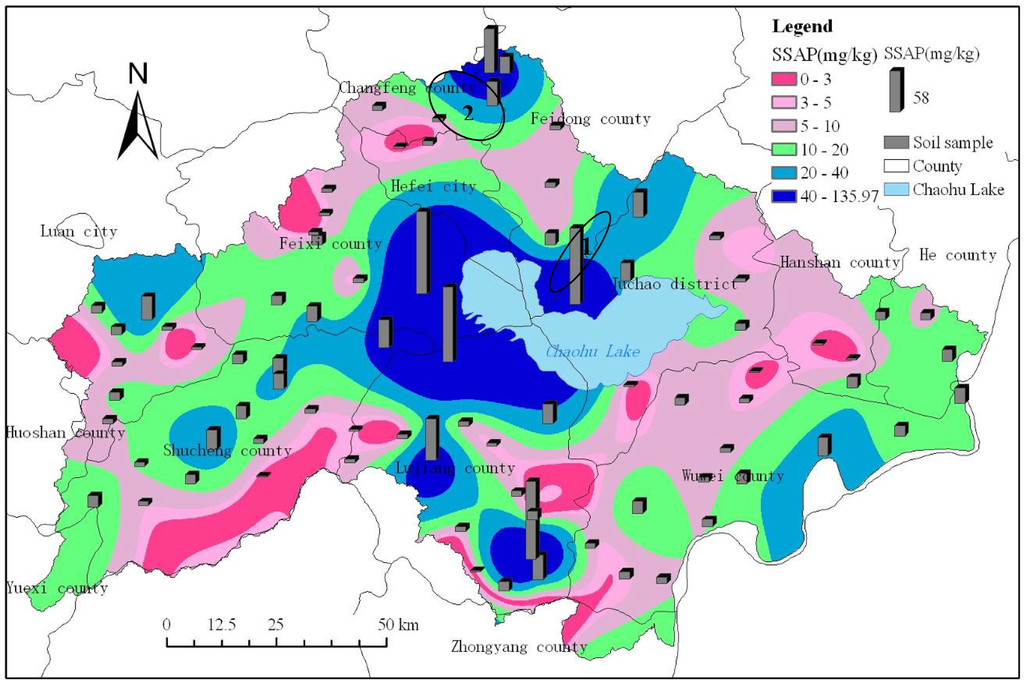 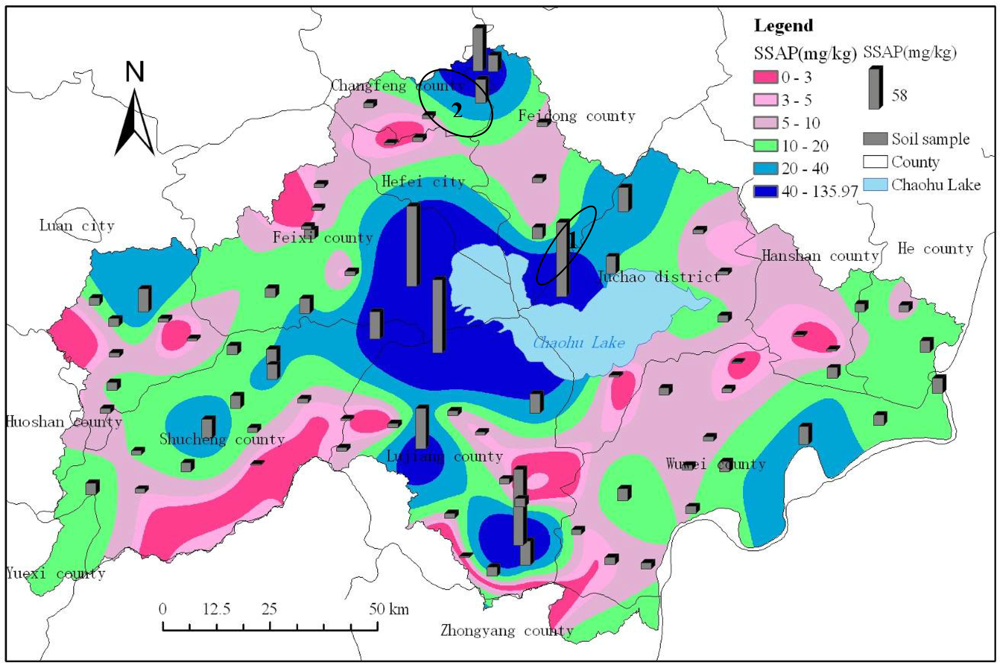 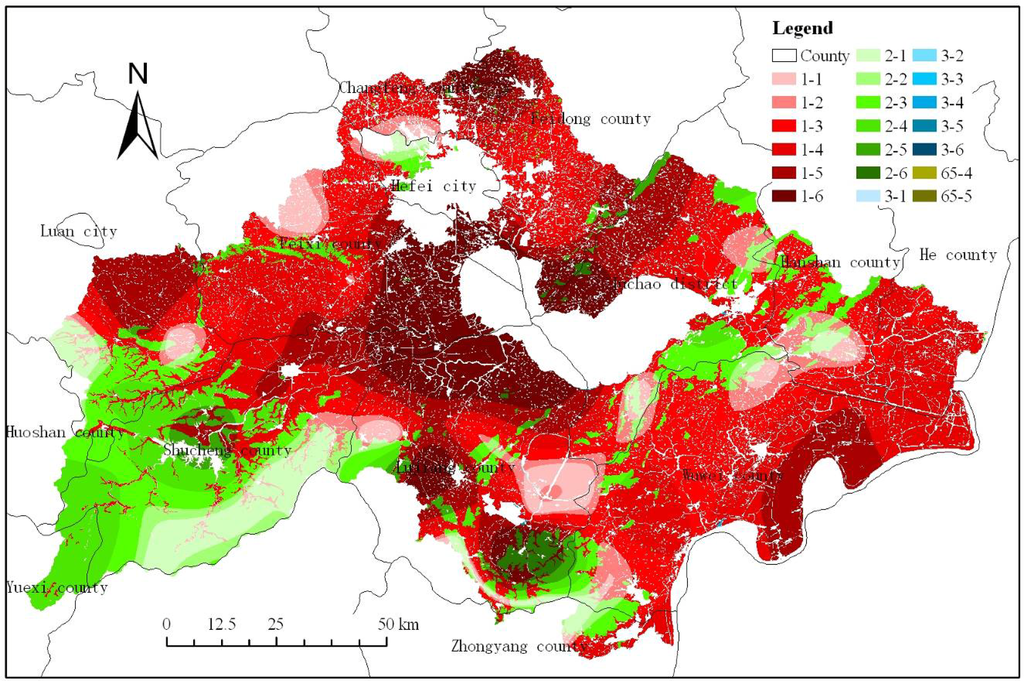 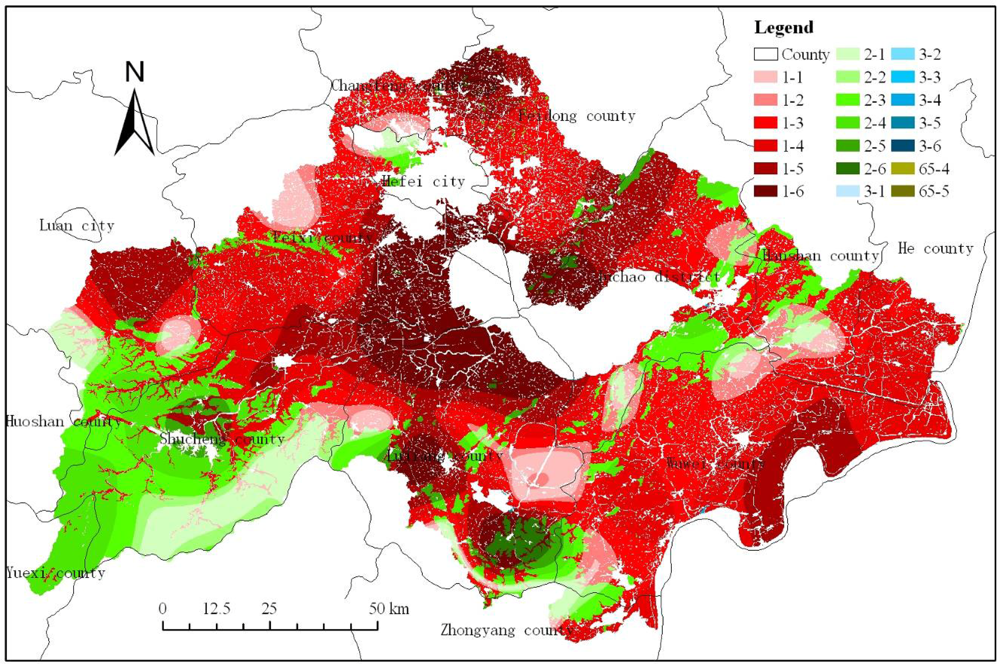 Table 1. Description of the statistics used in assessing the model performance.
n represents the number of observations, and n = 10.

Table 5. Summary statistics of soil available phosphorus of different nutrient levels.
*The level was delineated according to the classification standard of soil fertility of second soil survey of China [23].