Knowledge of Health Effects and Intentions to Quit Among Smokers in India: Findings From the Tobacco Control Policy (TCP) India Pilot Survey
Previous Article in Journal

P25 film, prepared by a facile dip-coating method without any binder, was further developed in a recirculating reactor for quinoline removal from synthetic wastewater. Macroporous foam Ni, which has an open three-dimensional network structure, was utilized as a substrate to make good use of UV rays. Field emission scanning electron microscopy and X-ray diffraction analysis showed that the coated/calcinated P25 films consisted of two crystal phases, and had a number of uniform microcracks on the surface. The effects of initial quinoline concentration, light intensity, reaction temperature, aeration, and initial pH were studied. Increased reaction time, light intensity, environmental temperature, and gas aeration were found to significantly improve the quinoline removal efficiency. The aeration effect of oxygen dependency on the quinoline degradation had the trend pure oxygen > air > no gas > pure nitrogen with free O2. The solution pH crucially affected quinoline photodegradation; the high electrostatic adsorption of quinoline molecules on the TiO2 surface was strongly pH dependent. 2-Pyridine-carboxaldehyde, 3-pyridinecarboxaldehyde, and 2(1H)-quinolinone were identified as the major intermediates of quinoline degradation. Based on these intermediates, a primary degradation mechanism was proposed. This reusable P25 film benefits the photodegradation of water contaminants and has potential in other various applications. View Full-Text
Keywords: quinoline; photocatalysis; porous nickel; aeration; water purification quinoline; photocatalysis; porous nickel; aeration; water purification
►▼ Show Figures 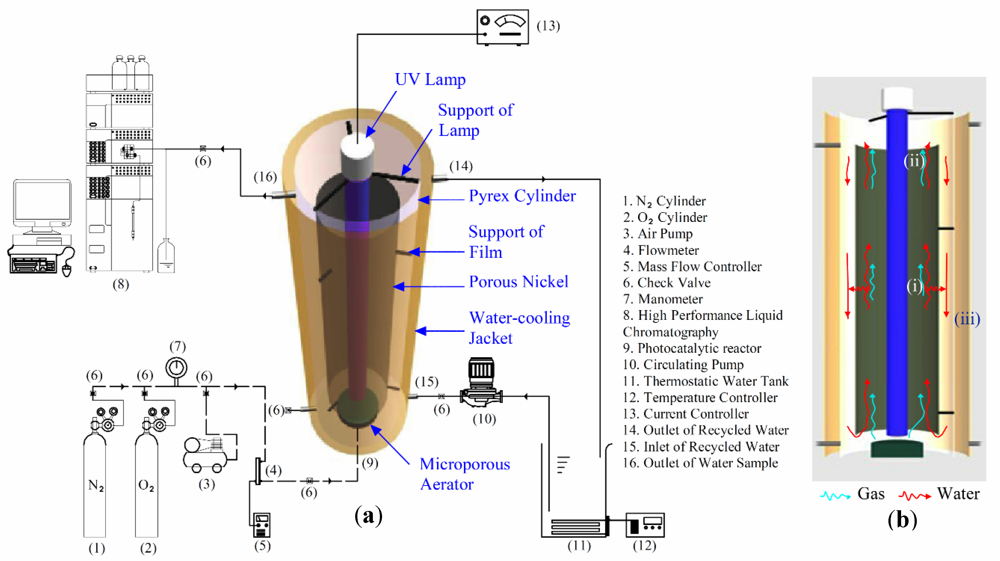