Molecular Insights into Host and Vector Manipulation by Plant Viruses

Single-stranded DNA (ssDNA) plant viruses belong to the families Geminiviridae and Nanoviridae. They are transmitted by Hemipteran insects in a circulative, mostly non-propagative, manner. While geminiviruses are transmitted by leafhoppers, treehoppers, whiteflies and aphids, nanoviruses are transmitted exclusively by aphids. Circulative transmission involves complex virus–vector interactions in which epithelial cells have to be crossed and defense mechanisms counteracted. Vector taxa are considered a relevant taxonomic criterion for virus classification, indicating that viruses can evolve specific interactions with their vectors. Thus, we predicted that, although nanoviruses and geminiviruses represent related viral families, they have evolved distinct interactions with their vector. This prediction is also supported by the non-structural Nuclear Shuttle Protein (NSP) that is involved in vector transmission in nanoviruses but has no similar function in geminiviruses. Thanks to the recent discovery of aphid-transmitted geminiviruses, this prediction could be tested for the geminivirus alfalfa leaf curl virus (ALCV) and the nanovirus faba bean necrotic stunt virus (FBNSV) in their common vector, Aphis craccivora. Estimations of viral load in midgut and head of aphids, precise localization of viral DNA in cells of insect vectors and host plants, and virus transmission tests revealed that the pathway of the two viruses across the body of their common vector differs both quantitatively and qualitatively. View Full-Text
Keywords: fluorescent in situ hybridization; qPCR; leaf discs; Hemiptera; nanovirus; geminivirus; vector transmission fluorescent in situ hybridization; qPCR; leaf discs; Hemiptera; nanovirus; geminivirus; vector transmission
►▼ Show Figures 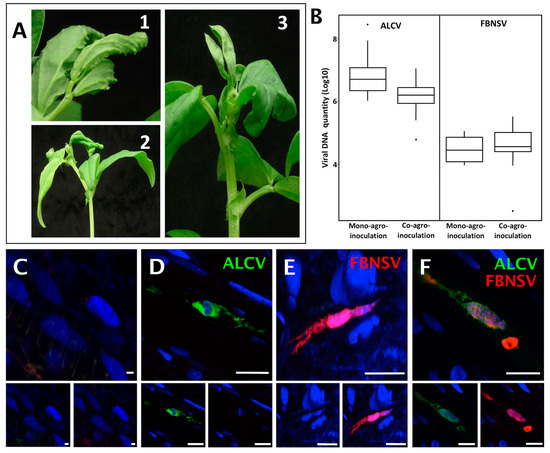