Since late 2010, porcine epidemic diarrhea virus (PEDV) has rapidly disseminated all over the China and caused considerable morbidity and high mortality (up to 100%) in neonatal piglets. 79.66% (141 of 177) pig farms in 29 provinces (excluding Tibet and Hainan, China) and 72.27% (417 of 577) samples were positive for PEDV confirmed by reverse transcription-polymerase chain reaction (RT-PCR). The full-length S genes of representative field strains were sequenced. 33 field strains share 93.5%–99.9% homologies with each other at the nucleotide sequence level and 92.3%–99.8% homologies with each other at the amino acids sequence level. Most field strains have nucleotide deletion and insertion regions, and show lower homologies (93.5%–94.2%) with Chinese classical strain CH/S, however higher homologies (97.1%–99.3%) with recent strain CHGD-1. The phylogenetic analysis showed there are classical strains and variants prevailing in pig herd in China. PEDV has a high detection rate in pig herds in China. Sequence analysis indicated the S genes of recent field strains have heterogeneity and the variants are predominant.
Keywords: PEDV; S gene; heterogeneity; genetic variation; variants PEDV; S gene; heterogeneity; genetic variation; variants

Porcine epidemic diarrhea virus (PEDV) is a member of genus Alphacoronavirus within the family Coronaviridae and is a single-stranded positive-sense RNA virus. PEDV was firstly identified in Belgium in 1978 [1]. The disease caused by PEDV was firstly observed in feeder pigs and fattening swine in England [2] and was proposed the name “porcine epidemic diarrhea” (PED) [3]. PED is an acute and highly contagious enteric disease characterized by severe enteritis, vomiting and watery diarrhea in swine.
In China, PED was firstly occurred in Shanghai in 1973, however the causative agent was PEDV confirmed in 1984 [4]. Since first identified there have been occasional outbreaks of PEDV in China. However, outbreaks of PEDV have been observed on most swine breeding farms in most provinces since late 2010 in China. The piglets within one week of age and sometimes within only a few hours showed vomiting, severe watery diarrhea, severe dehydration and high mortality (up to 100%), but few sows or fattening swine showed any clinical signs during the outbreaks [5,6]. The economic loss caused by PEDV infection has been continuous and serious in China.
The Spike (S) gene is considered the most useful in revealing the genetic diversity of coronavirus isolates [7,8,9]. Like other coronaviruses, PEDV S gene also plays an important role in the molecular epidemiology and in the genetic variation of PEDV field strains [10,11,12]. In order to control and prevent PEDV infection, it is necessary for us to further investigate the prevalence of PEDV and the molecular characteristics of the S genes of Chinese PEDV field strains during 2011–2012. In this study, we firstly detected PEDV in the samples collected from 177 farms, then analyzed the sequence characteristics of S genes of field strains and performed the phylogenetic analysis of the field strains. 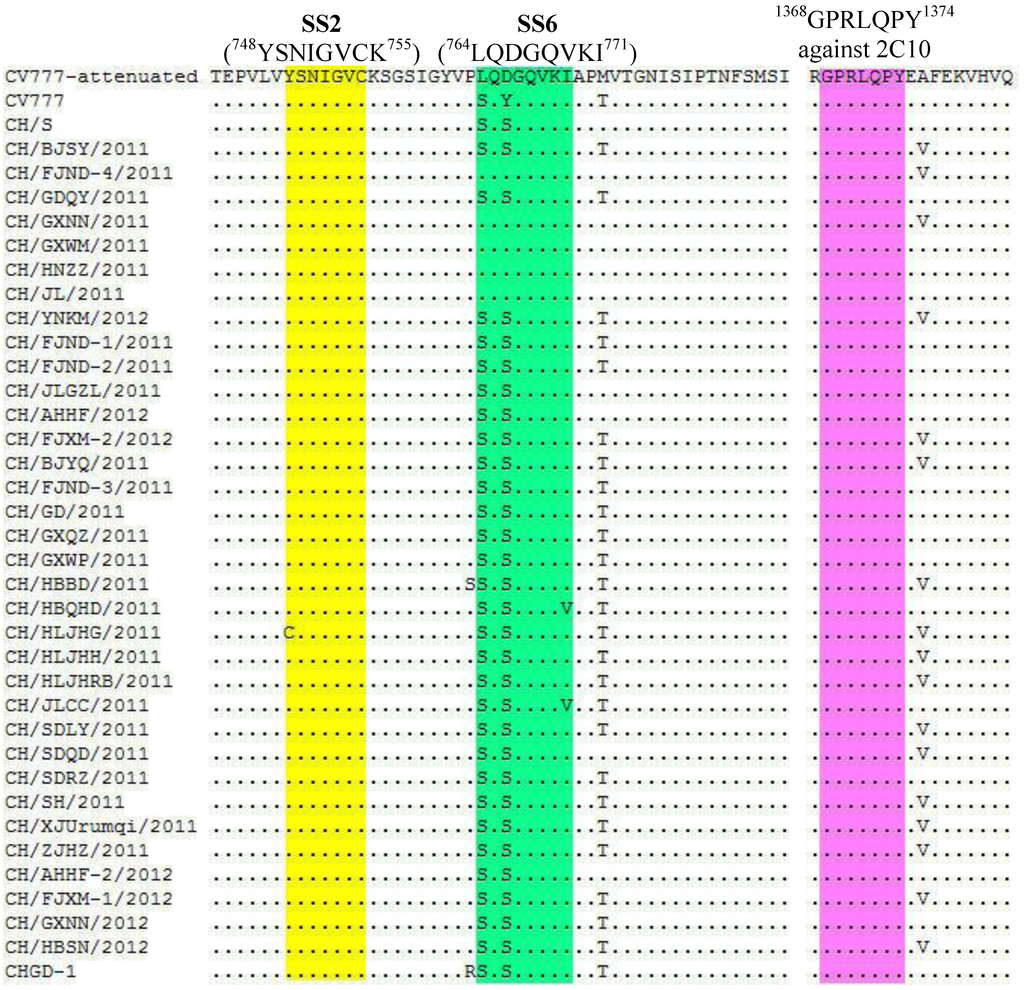 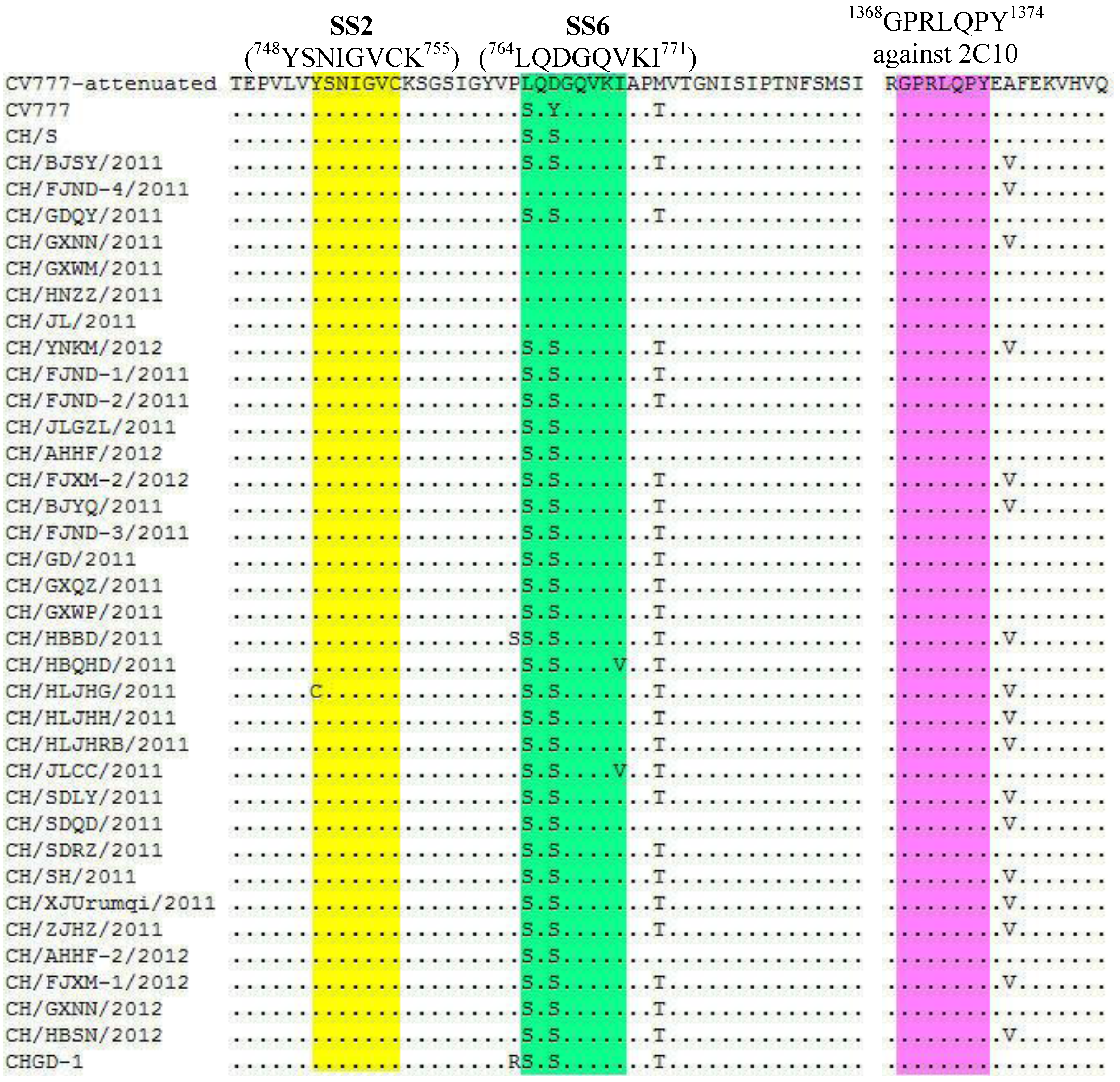 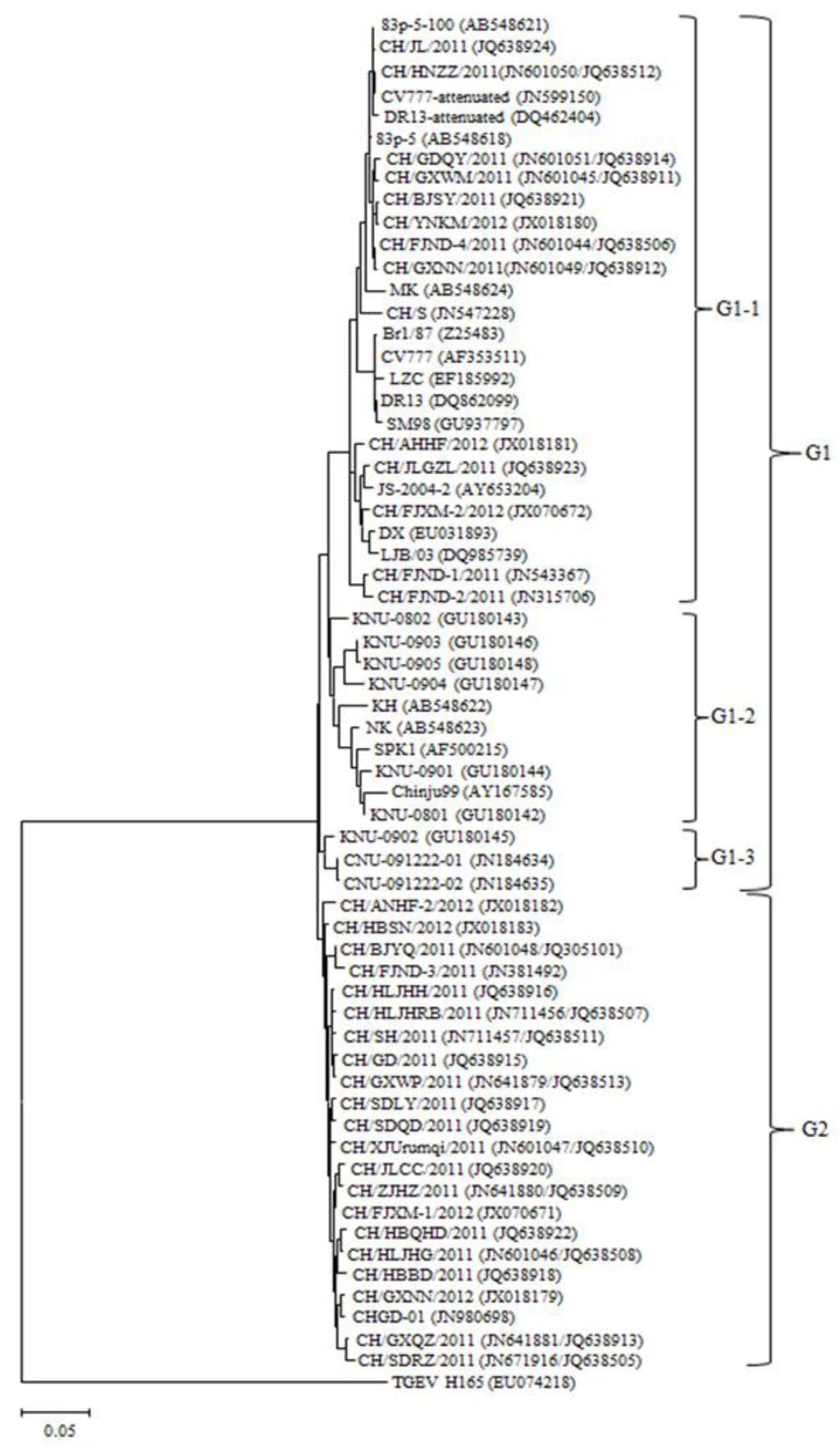 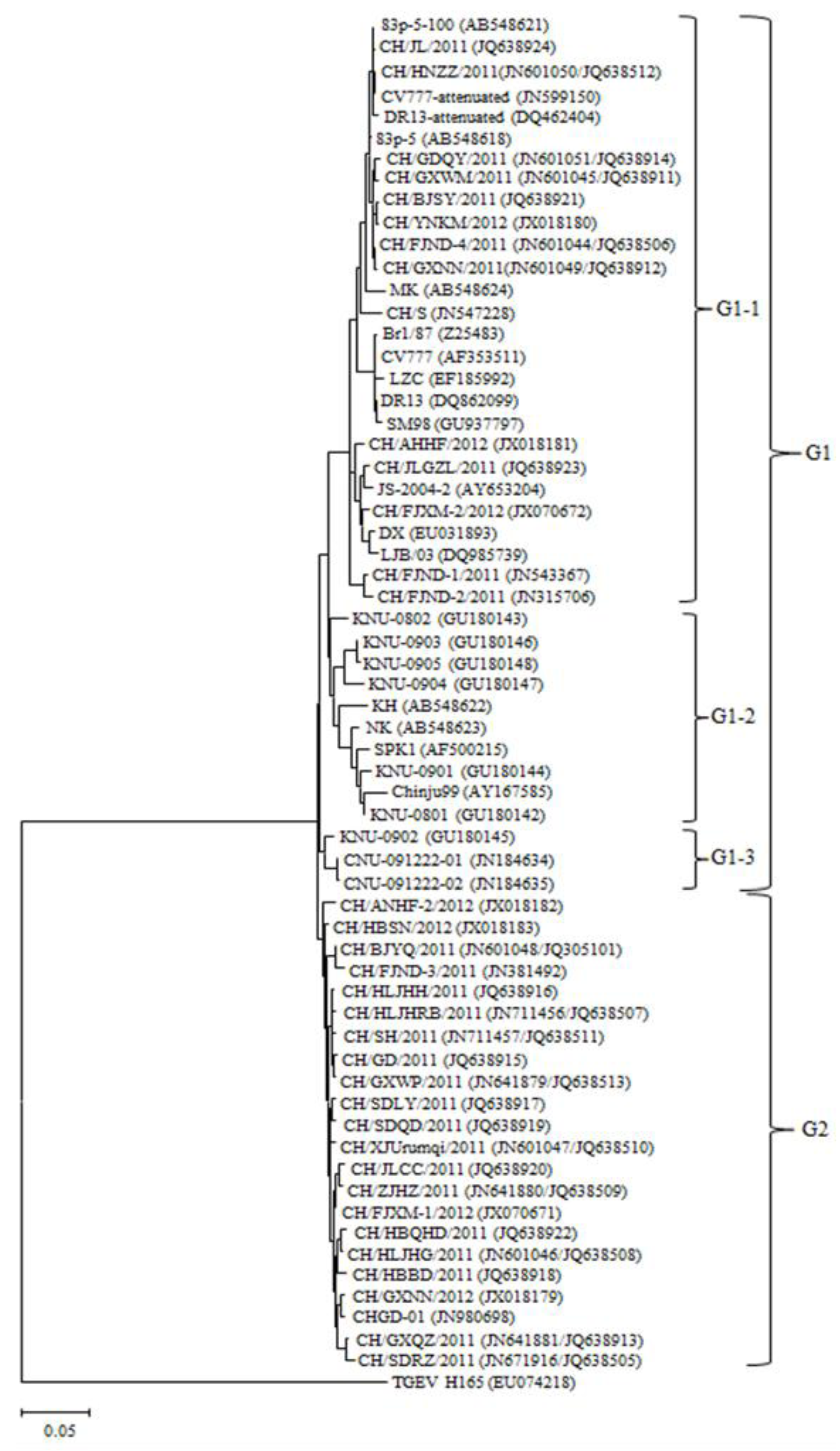 Since December 2010, outbreaks of viral diarrhea have been observed on most swine-breeding farms in most of the provinces of China. The clinical appearance was similar to that of PEDV infection. In this study, 79.66% (141 of 177) pig farms in 29 provinces (excluding Tibet and Hainan, China) were confirmed as infected with PEDV, and 72.27% (417 of 577) clinical samples were positive for PEDV. The results indicated that PEDV has a high prevalence rate in pig herds. TGEV was also detected by RT-PCR [16] in our lab, and the overall detection rate was 29.12% in clinical samples. Two other research groups in China reported that 40.8% (20 of 49) and 22.73% (5 of 22) sow milk samples were positive for PEDV in 2011 [5,6], and hypothesized that sow milk could represent a possible route for the vertical transmission of PEDV from sow to suckling piglets [5]. We also detected PEDV in 76.71% (56 of 73) sow milk samples in 2012. These results indicated that newborn piglets could be infected by PEDV in sow milk.
Our previously study indicated that the S gene of CH/FJND-3/2011) has the lowest sequence homology (93.75%) with that of CH/S and is 9 nt longer than those of CV777 and CH/S [17]. A more precise study with the full-length S genes of recently Chinese field strains will help to best understand the genetic relationships among prevailing PEDV in China. In this study, the entire S genes of 33 representative Chinese field strains during 2011–2012 were determined and compared with those of CV777-attenuated, CH/S and CHGD-1.
The S genes of attenuated strains (CV777-attenuated, DR13-attenuated, 83p-5-100) are 4149 nt in length [18,19], however those of classical virulent strains are 4152 nt in length, such as CV777 [20], Br1/87 [21] and Chinese classical strain CH/S [22]. The S genes of 33 recently field strains show the diversity in length. The S genes of 13 recently field strains in G1-1 are shorter than those of classical strains in length because of the nucleotides deletion, however, the S genes of 20 recently field strains in G2 are longer than those of classical strains in length because of the nucleotides insertion and deletion.
The unique characteristic of 20 field strains in G2 in the present study was the presence of the nucleotides insertion and deletion in the S genes. The alignment of S genes reveals that one domain which locates within the 5' most 1100 nt of the S gene exhibited an increased divergence compared to the remaining part of the sequence. The insertion and deletion regions are mainly clustered in this region. Furthermore, the largest number of nucleotide differences is also clustered in this domain. Most of the diversity between the recent field strains in G1-1 and in G2 is located within the 1100 nt-domain. The phenomenon is also found in the S gene of CH/FJND-3/2011 [17].
Our findings showed the S genes of 13 field strains in G1-1 exhibited higher homologies with those of CH/S and CV777-attenuated than with that of CHGD-1. However, the S genes of 20 field strains in G2 exhibited higher sequence identities with that of CHGD-1 than with those of CH/S and CV777-attenuated. These results further indicated the heterogeneity in S genes of PEDV field strains prevailing in China.
According to the phylogenetic analyses, the recently Chinese field strains were divided into two distinct clusters. 13 field strains and reference strains including Korean field strains, Japanese strains, PEDV-attenuated strains and Chinese classical strains were determined to belong to G1, whereas 20 field strains and 2 reference strains (CH/FJND-3/2011, CHGD-1) were clustered together within G2. These data demonstrate that prevalent PEDV field strains in China have two types (classical strains and variant strains), and most field strains are variant strains. These variants are more closely related to each other and to other previously identified Chinese variants CH/FJND-3/2011 and CHGD-1 rather than Chinese classical strains (CH/S, DX, JS-2004-2, LJB/03, LZC) and attenuated strains.
The antigen epitope motif (1368GPRLQPY1374) [13] and the COE domain (aa499-638) [14] of S protein can induce neutralizing antibodies against PEDV. According to the alignment of amino acid sequences of S proteins, the antigen epitope motif (1368GPRLQPY1374) is conserved in all the recent field strains. The COE domain consists of 140 aa. Compared to CV777-attenuated, 27 field strains have 1-8 different aa, 7 field strains have no different aa. A previously study reported that three of these mutations in the recent isolates influenced the hydrophobicity of the S protein as compared with that for CV777 [5].

A total of 577 samples (504 small intestines of dead neonatal piglets and 73 sow milk) were collected from 177 farms in 29 provinces from February 2011 to November 2012. The collection procedures of milk were as follows. The sows’ teats were washed three times with sterile physiological saline. The workers milked the teats with sterile gloves, and took the middle section of the milk in 1.5mL sterile microcentrifuge tubes. The milk samples were sent to our lab with ice bags or dry ice. All the samples were initially detected by reverse transcription-polymerase chain reaction (RT-PCR) using previously described methods [23]. The animal experiments were approved by Harbin Veterinary Research Institute and performed in accordance with animal ethics guidelines and approved protocols. The approval number of Animal Ethics Committee is Heilongjiang-SYXK-2006-032.

The sequences of full-length S genes of 33 field strains (Table 1) and 30 reference strains (Table 4) were used in sequence alignments and phylogenetic analysis. The multiple sequence alignments, nucleotide and amino acid sequences divergences were analyzed by Jotun Hein method in the software program MegAlign [24]. Phylogenetic tree was constructed from the aligned nucleotide sequences by the maximum likelihood method in MEGA 5.05 program [25].

This study confirmed that PEDV has a high detection rate in pig herds in China. The sequence analysis indicated the S genes of recent field strains are heterogeneous. The phylogenetic analysis indicated that there are two types of PEDV strains (classical strains and variant strains) prevailing in China. The sequence information in the current study would lead to a better understanding of the genetic diversity among recently Chinese PEDV strains and contribute to the development of more effective vaccines. The future work should focus on the variants of PEDV in China and develop novel variant strain–based vaccines to treat the current outbreak in China.