Nursing Education in a Real-Life Context: The Teaching Ward Round

This is a secondary analysis study aimed to identify the determinants of multimorbid older adult life satisfaction by gender using Korean Longitudinal Study of Ageing (KLoSA) data from 2016.

2.2. Description of the Data Source, Procedure for Data Collection, and Sampling

The KLoSA is a data-based panel that creates and implements effective social and economic policies to address the emerging trends as the population of Korea ages. This nationally representative survey has been conducted biennially with 10,254 Koreans aged 45 or older, excluding people dwelling in facilities and residents of Jeju Island, from 2006 to 2016 [32]. The survey contains seven domains (population, family, health, employment, income, assets, subjective expectancy, life satisfaction) and addresses the physical and psycho-social factors affecting older peoples’ health status.
The KLoSA data were downloaded from the website of the Korean Employment Survey (https://survey.keis.or.kr). The sixth phase of the KLoSA, which is the most recent data set available for public use, was used to assess the most current trends. Among the 10,254 participants, there were 6618 respondents in the sixth phase, of whom 4522 were older than 65 years. Among the latter, 2140 respondents who had more than two chronic diseases (hypertension, diabetic mellitus, malignant tumor, chronic lung disease, hepatic disease, heart disease, cerebrovascular disease, psychological disease, arthritis, rheumatism) were included in the final analysis. This study was approved by the institutional review board of the researchers’ university (No. 162-13). This is a secondary analysis study aimed to identify the determinants of multimorbid older adult life satisfaction by gender using Korean Longitudinal Study of Ageing (KLoSA) data from 2016.

Health behavioral factors were cigarette smoking (never smoked vs. smoker) and alcohol drinking (never drunk vs. drinker); regular exercise was assessed based on yes or no to the question, “Do you exercise more than once a week regularly?”

Life satisfaction was assessed using the question “How satisfied are you with your life compared to that of your peers in the same age group?” in terms of health and overall quality of life (QOL). Participants answered on a scale from 0 to 100 points at intervals of 10 points, with a higher score indicating greater satisfaction. Among the factors of life satisfaction, health and overall QOL were used as dependent variables in this study.

IBM SPSS Statistics 25.0 (IBM, Inc., Armonk, NY, USA) was used for data analysis. Descriptive statistics of frequency, percentage, mean, and standard deviation were used to describe the variables. Differences between older males and females with multimorbidity were analyzed using Chi-square (χ2) and independent t-tests. A multivariate linear regression analysis was conducted to understand the predictors of life satisfaction among older males and females with multimorbidity. Forward selection was used to determine the significant predictors that would be included in the multivariate model. All analysis was conducted by applying population weights calculated to reflect changes in the general distribution of the total population [34].

3.1. Differences between Older Males and Females with Multimorbidity

3.2. Differences in Multimorbidity by Gender

Differences in self-reported diagnosed chronic diseases between older males and females are shown in Figure 1. Hypertension was the most common chronic disease in both females and males (84.7% and 83.3%, respectively). However, arthritis/rheumatism (which was the second-most frequent disease for females) was much more common in females than males (71.2% and 30.8%, respectively). A chronic disease that affected women more than men was psychological disease (12.3% and 9.4%).
Table 2 describes the data of the included 882 females (63.7%) and 438 males (57.9%) to determine the 10 most common combinations of multimorbidity. The most common combination of females was hypertension and arthritis/rheumatism (24.0%), while that of males was hypertension and diabetes mellitus (18.2%). All 10 of the male combinations included hypertension, while six of 10 female combinations involved arthritis/rheumatism.

3.3. Predictors of Life Satisfaction in Older Females and Males with Multimorbidity

This study analyzed the differences in multimorbidity pattern and life satisfaction according to gender using secondary data of the KLoSA. The combination of hypertension, diabetic mellitus, and arthritis was frequent in both males and females; the most frequent combination of multimorbidity in elderly females was hypertension and arthritis (22.4%), and six of their top 10 combinations included arthritis. In contrast, hypertension and diabetes mellitus was the most frequent combination in elderly males (18.2%); 8.9% of them had hypertension and arthritis, and arthritis was included in two of the top 10 combinations. According to a 2020 report by the World Health Organization, 18.0% of women and 9.6% of men older than 60 years had symptomatic arthritis; 80% of those with arthritis had limitations in movement; and 25% could not perform their major activities of daily living (ADLs) [35].
Arthritis tends to affect elderly females more than it does elderly males, and males performed more regular exercise than did females. Regular exercise is the most significant factor in satisfaction with health and overall QOL. Although pain caused by arthritis is known to interfere with regular exercise [36], proper exercise can relieve pain and improve physical function [37,38]. Therefore, elderly women need to be encouraged to exercise regularly.
In this study, the number of married male elderly was higher than the female elderly. In addition, this study found that elderly men were more satisfied with their health and overall QOL than were women, which is not consistent with the results of several previous studies that elderly women’s life satisfaction level was higher or not significantly different from men’s [27,28]. The average life expectancy of men and women in Korea in 2018 is 79.7 and 85.7 years, respectively, but the life expectancy excluding the disease period is 64.4 years in both males and females, showing that women live longer than men in unhealthy conditions and alone [39]. Therefore, it is necessary to study the change in life satisfaction among the elderly according to age group. In addition, socioeconomic factors such as economic status can affect health status, resulting in gender differences [26]. In a recent study [40], investigating gender differences in QOL among the elderly in low- and middle-income countries, elderly men reported better QOL than women, and income was one of the factors significantly related to QOL. Although South Korea’s annual GDP per capita reached USD$30,000 in 2018, making it a high-income country [41], it has the largest difference in income poverty rates between people aged over 65 (43.8%) and the total population (17.4%) among OECD countries; also, the elderly poverty rate was 49.0% in women and 37.1% in men [42].
Income level was not included in this study, but employment rate and use of private insurance were lower in women than men, indicating worse financial status among women. Since elderly financial status is associated with not only physical and mental health, but also QOL [40,43], gender-specific efforts are required to alleviate poverty in the elderly.
In this study, the factors affecting satisfaction with health and overall QOL in the elderly were different according to gender. Depression, cognition, regular exercise, number of chronic diseases, and employment status were significant factors in satisfaction with health in both elderly women and men, and depression, regular exercise, and number of chronic diseases were significant factors in satisfaction with overall QOL. Multimorbidity most significantly affects satisfaction with health and QOL of both elderly men and women, and these findings were consistent with previous studies [7,44]. However, most healthcare services in Korea are designed to treat single diseases [45]. Therefore, in primary care, management and support for the elderly with multimorbidity need to be provided and improved.
The study analyzed cognition, depression, and grip strength as well as the number of co-morbid diseases as elderly health status factors. These factors influence each other and affect elder life satisfaction. The elderly female participants in this study had more chronic diseases, lower cognition level, and more depression symptoms than the males. These factors significantly affect life satisfaction, which was somewhat consistent with previous studies. Previous studies reported that elderly women’s cognitive function level was lower than that of men’s [46,47] and cognitive capacity was the most influential factor in life satisfaction among both elderly women and men [23,48]. Depression is another important factor that affects elder life satisfaction. Onishi et al. [49] found that depression was a significant determinant of life satisfaction among elderly women, while cognition and comorbidity were not. Similarly, Puvill et al. [50] found that depressive symptoms and loneliness were strongly associated with life satisfaction. Besides, elder grip strength is a major factor that predicts patient nutritional status, physical function, and mortality in previous studies [51] and it is known that grip strength and depression or cognitive capacity have an inverse correlation [52,53]. Therefore, we need to comprehensively approach the physical and psychological factors that influence elder life satisfaction.
In this study, it is difficult to confirm any causal relationships because the cross-sectional design could not confirm the temporal arrangement between variables and all factors that may affect the relationship between variables could not be controlled. The number and type of diseases reported in the study was limited and the severity of multimorbidity was not considered, which may affect life satisfaction in the elderly, so we could not confirm their impacts on life satisfaction. In addition, since this study used secondary data to analyze factors affecting life satisfaction, there were limitations in including the selection of variable measurement tools and other factors that could also affect life satisfaction, such as economic level, family relationship, living arrangement, area of residence, and nutritional status. Therefore, follow-up studies that reflect these factors are suggested. Nevertheless, one of the strengths of this study is that the patterns of multimorbidity and the factors influencing life satisfaction among the elderly are identified by gender using a nationwide sample representing the elderly in Korea.

The study was conducted according to the guidelines of the Declaration of Helsinki, and approved by the Institutional Review Board of Ewha Womans University (No.162-13 and 20 June 2018).

Patient consent was waived due to a secondary analysis.

Publicly available datasets were analyzed in this study. This data can be found here: http://survey.keis.or.kr/klosa/klosadownload/List.jsp. 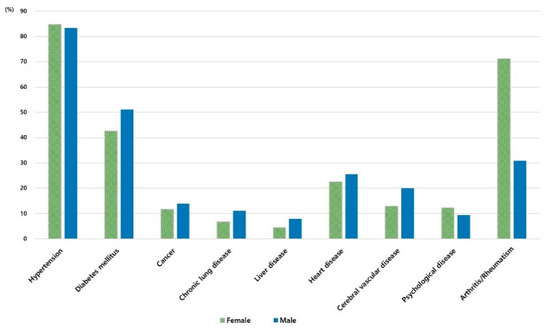 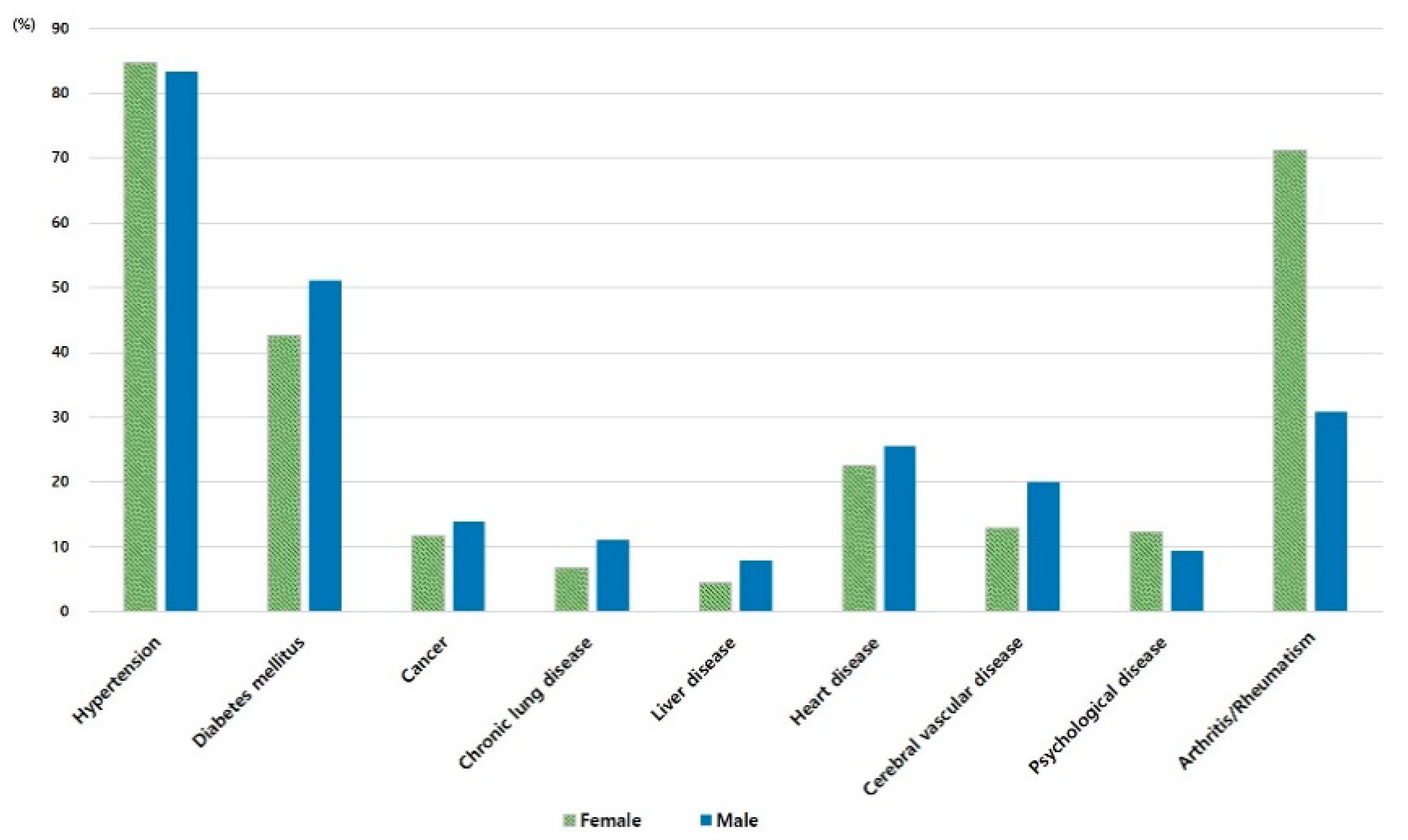