The Tibetan Plateau, the world’s largest orogenic plateau, hosts thousands of lakes that play prominent roles as water resources, environmental archives, and sources of natural hazards such as glacier lake outburst floods. Previous studies have reported that the size of lakes on the Tibetan Plateau has changed rapidly in recent years, possibly because of atmospheric warming. Tracking these changes systematically with remote sensing data is challenging given the different spectral signatures of water, the potential for confusing lakes with glaciers, and difficulties in classifying frozen or partly frozen lakes. Object-based image analysis (OBIA) offers new opportunities for automated classification in this context, and we have explored this method for mapping lakes from LANDSAT images and Shuttle Radar Topography Mission (SRTM) elevation data. We tested our algorithm for most of the Tibetan Plateau, where lakes in tectonic depressions or blocked by glaciers and sediments have different surface colours and seasonal ice cover in images obtained in 1995 and 2015. We combined a modified normalised difference water index (MNDWI) with OBIA and local topographic slope data in order to classify lakes with an area >10 km2. Our method derived 323 water bodies, with a total area of 31,258 km2, or 2.6% of the study area (in 2015). The same number of lakes had covered only 24,892 km2 in 1995; lake area has increased by ~26% in the past two decades. The classification had estimated producer’s and user’s accuracies of 0.98, with a Cohen’s kappa and F-score of 0.98, and may thus be a useful approximation for quantifying regional hydrological budgets. We have shown that our method is flexible and transferable to detecting lakes in diverse physical settings on several continents with similar success rates. View Full-Text
Keywords: Tibetan Plateau; lakes; LANDSAT; SRTM; MNDWI; OBIA; change detection Tibetan Plateau; lakes; LANDSAT; SRTM; MNDWI; OBIA; change detection
►▼ Show Figures 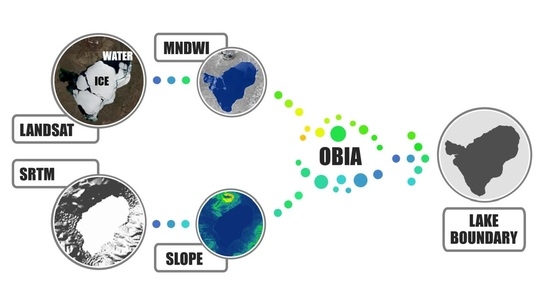