Zearalenone (ZEN) is a mycotoxin that not only binds to estrogen receptors, but also interacts with steroidogenic enzymes and acts as an endocrine disruptor. The aim of this study was to verify the hypothesis that low doses, minimal anticipated biological effect level (MABEL), no-observed-adverse-effect level (NOAEL) and lowest-adverse-effect level (LOAEL), of ZEN administered orally for 42 days can induce changes in the peripheral blood concentrations of selected steroid hormones (estradiol, progesterone and testosterone) in pre-pubertal gilts. The experiment was performed on 60 clinically healthy gilts with average BW of 14.5 ± 2 kg, divided into three experimental groups and a control group. Group ZEN5 animals were orally administered ZEN at 5 μg ZEN/kg BW, group ZEN10 — at 10 μg ZEN/kg BW, group ZEN15 — at 15 μg ZEN/kg BW, whereas group C received a placebo. Five gilts from every group were euthanized on analytical dates 1, 2 and 3 (days 7, 14 and 42 of the experiment). Qualitative and quantitative changes in the biotransformation of low ZEN doses were observed. These processes were least pronounced in group ZEN5 (MABEL dose) where ZEN metabolites were not detected on the first analytical date, and where β-ZEL was the predominant metabolite on successive dates. The above was accompanied by an increase in the concentration of estradiol (E2) which, together with “free ZEN”, probably suppressed progesterone (P4) and testosterone (T) levels. View Full-Text
Keywords: zearalenone; low doses; steroid hormones; biotransformation; pre-pubertal gilts zearalenone; low doses; steroid hormones; biotransformation; pre-pubertal gilts
►▼ Show Figures 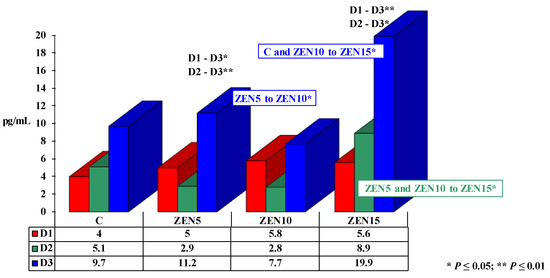