Limnological Differences in a Two-Basin Lake Help to Explain the Occurrence of Anatoxin-a, Paralytic Shellfish Poisoning Toxins, and Microcystins

Chautauqua Lake, New York, is a two-basin lake with a deeper, cooler, and less nutrient-rich Northern Basin, and a warmer, shallower, nutrient-replete Southern Basin. The lake is populated by a complex mixture of cyanobacteria, with toxigenic strains that produce microcystins, anatoxins, and paralytic shellfish poisoning toxins (PSTs). Samples collected from 24 sites were analyzed for these three toxin classes over four years spanning 2014–2017. Concentrations of the three toxin groups varied widely both within and between years. During the study, the mean and median concentrations of microcystins, anatoxin-a, and PSTs were 91 and 4.0 μg/L, 0.62 and 0.33 μg/L, and 32 and 16 μg/L, respectively. Dihydro-anatoxin was only detected once in Chautauqua Lake, while homo-anatoxin was never detected. The Northern Basin had larger basin-wide higher biomass blooms with higher concentrations of toxins relative to the more eutrophied Southern Basin, however blooms in the North Basin were infrequent. Chlorophyll concentrations and toxins in the two basins were correlated with different sets of environmental and physical parameters, suggesting that implementing controls to reduce toxin loads may require applications focused on more than reductions in cyanobacterial bloom density (e.g., reduction of phosphorus inputs), and that lake limnological factors and morphology are important determinants in the selection of an appropriate management strategy. Chautauqua Lake is a drinking water source and is also heavily used for recreation. Drinking water from Chautauqua Lake is unlikely to be a significant source of exposure to cyanotoxins due to the location of the intakes in the deeper North Basin, where there were generally low concentrations of toxins in open water; however, toxin levels in many blooms exceeded the US Environmental Protection Agency’s recreational guidelines for exposure to cyanotoxins. Current cyanotoxin monitoring in Chautauqua Lake is focused on microcystins. However, the occurrence of blooms containing neurotoxic cyanotoxins in the absence of the microcystins indicates this restricted monitoring may not be sufficient when aiming to protect against exposure to cyanotoxins. The lake has a large number of tourist visitors; thus, special care should be taken to prevent recreational exposure within this group. View Full-Text
Keywords: cyanotoxin co-occurrence; cyanobacteria; HABs; Chautauqua Lake cyanotoxin co-occurrence; cyanobacteria; HABs; Chautauqua Lake
►▼ Show Figures 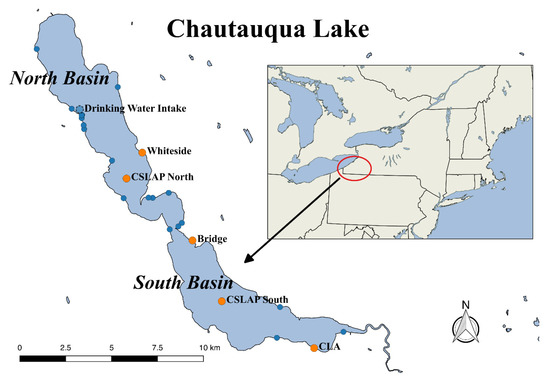