Animal venoms, widespread throughout the world, are complex mixtures, the composition of which depends on the venom-producing species. The objective of this study was to contribute to the development of animal venom-based medicines by investigating the use of animal venom pharmacopuncture in Korean medicine (KM) institutions. We surveyed 256 public health centers from 1 through 31 October 2019 as guided by the Ministry of Health and Welfare (MoHW). A questionnaire developed by an expert group was distributed and collected for statistical analysis. The survey identified three types of animal venom-based pharmacopuncture: bee, snake, and toad venoms. The medications are based on a single animal venom ingredient and produced in 11 external herbal dispensaries (EHDs). Each animal venom is processed, refined, and freeze-dried in a cleanroom to produce a powder formulation that is later measured, diluted, filtered, filled, sealed, sterilized, and packaged as pharmacopuncture injections used in KM institutions. Bee venom therapy is effective in treating musculoskeletal pain, snake venom therapy is effective in controlling bleeding during surgery, and toad venom therapy is effective in cancer treatment. The study suggests that bee, snake, and toad venoms could be used in medical institutions and have the potential for drug development. View Full-Text
Keywords: animal venom; bee venom; snake venom; toad venom; pharmacopuncture animal venom; bee venom; snake venom; toad venom; pharmacopuncture
►▼ Show Figures 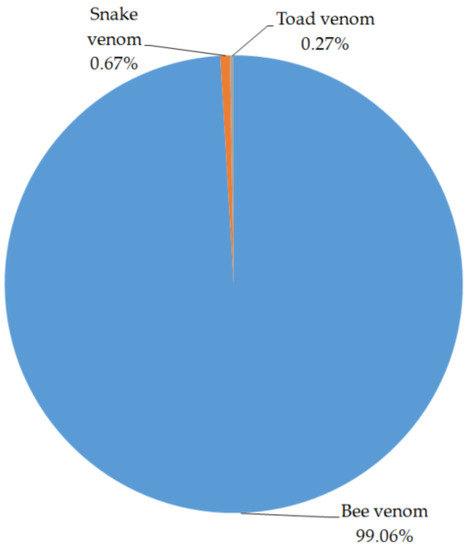