Impacts of Climate Change Interacting Abiotic Factors on Growth, aflD and aflR Gene Expression and Aflatoxin B1 Production by Aspergillus flavus Strains In Vitro and on Pistachio Nuts

Resistance against infection by the fungus Aspergillus flavus Link in commercial maize (Zea mays L.) is the topic of many studies, but few studies have investigated the effects of A. flavus infection on gene expression levels in ear kernels. A crucial component of gene expression profiling by RT-qPCR is having a reliable set of reference genes that show relatively constant expression across the treatments and phenotypes under study. Currently, however, there is no published information on reference genes suitable for measuring changes in kernel gene expression levels after infection with A. flavus. Thus, in this study, six candidate reference genes (ACT1, β-Tub2, eIF4A2, TATA, EFIα, and GAPDH) were evaluated and ranked according to their expression stability. The genes were amplified from first-strand cDNA samples synthesized from kernels of two susceptible and two resistant maize lines that were either inoculated with A. flavus or water or not inoculated. Three software packages were used to calculate and rank the stability of expression for these genesgeNorm, NormFinder, and BestKeeper. The analysis revealed that the most stable genes to normalize expression levels from maize kernels responding to A. flavus inoculation and wounding were ACT1, EFIα, and eIF4A2. View Full-Text
Keywords: candidate gene; gene expression; aflatoxin candidate gene; gene expression; aflatoxin
►▼ Show Figures 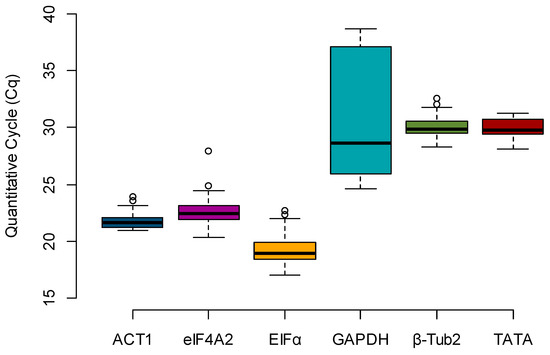