We report on two brothers with visual impairment, and non-syndromic alopecia in the elder proband. The parents were first-degree Pakistani cousins. Whole exome sequencing of the elder brother and parents, followed by Sanger sequencing of all four family members, led to the identification of the variants responsible for the two phenotypes. One variant was a homozygous nonsense variant in the inhibitory subunit of the cone-specific cGMP phosphodiesterase gene, PDE6H:c.35C>G (p.Ser12*). PDE6H is expressed in the cones of the retina, which are involved in perception of color vision. This is the second report of a homozygous PDE6H:c.35C>G variant causing incomplete achromatopsia (OMIM 610024), thus strongly supporting the hypothesis that loss-of-function variants in PDE6H cause this visual deficiency phenotype. The second variant was a homozygous missense substitution in the lysophosphatidic acid receptor 6, LPAR6:c.188A>T (p.Asp63Val). LPAR6 acts as a G-protein-coupled receptor involved in hair growth. Biallelic loss-of-function variants in LPAR6 cause hypotrichosis type 8 (OMIM 278150), with or without woolly hair, a form of non-syndromic alopecia. Biallelic LPAR6:c.188A>T was previously described in five families from Pakistan. View Full-Text
Keywords: achromatopsia; alopecia; phosphodiesterase (PDE); PDE6H; LPAR6 achromatopsia; alopecia; phosphodiesterase (PDE); PDE6H; LPAR6
►▼ Show Figures 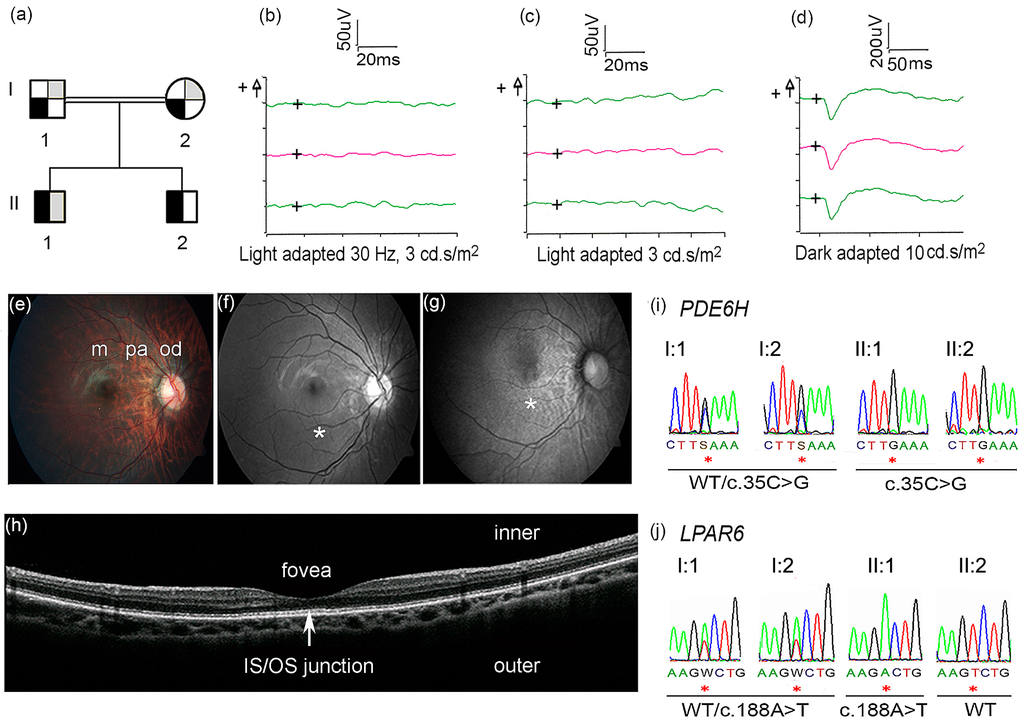