We report and discuss the results of a quantitative reverse transcription polymerase chain reaction (qRT-PCR) analysis of the expression patterns of seven three amino acid loop extension (TALE) homeobox genes (four KNOTTED-like homeobox (KNOX) and three BEL1-like homeobox (BELL) genes) identified after next generation sequencing (NGS) and assembly of the sporophyte and gametophyte transcriptomes of the endangered fern species Vandenboschia speciosa. Among the four KNOX genes, two belonged to the KNOX1 class and the other two belonged to the KNOX2 class. Analysis of the deduced amino acid sequences supported the typical domain structure of both types of TALE proteins, and the homology to TALE proteins of mosses, lycophytes, and seed plant species. The expression analyses demonstrate that these homeodomain proteins appear to have a key role in the establishment and development of the gametophyte and sporophyte phases of V. speciosa lifecycle, as well as in the control of the transition between both phases. Vandenboschia speciosa VsKNAT3 (a KNOX2 class protein) as well as VsBELL4 and VsBELL10 proteins have higher expression levels during the sporophyte program. On the contrary, one V. speciosa KNOX1 protein (VsKNAT6) and one KNOX2 protein (VsKNAT4) seem important during the development of the gametophyte phase. TALE homeobox genes might be among the key regulators in the gametophyte-to-sporophyte developmental transition in regular populations that show alternation of generations, since some of the genes analyzed here (VsKNAT3, VsKNAT6, VsBELL4, and VsBELL6) are upregulated in a non-alternating population in which only independent gametophytes are found (they grow by vegetative reproduction outside of the range of sporophyte distribution). Thus, these four genes might trigger the vegetative propagation of the gametophyte and the repression of the sexual development in populations composed of independent gametophytes. This study represents a comprehensive identification and characterization of TALE homeobox genes in V. speciosa, and gives novel insights about the role of these genes in fern development. View Full-Text
Keywords: TALE homeobox genes; KNOX genes; BELL genes; fern; Vandenboschia speciosa; expression patterns; qRT-PCR; transcriptome TALE homeobox genes; KNOX genes; BELL genes; fern; Vandenboschia speciosa; expression patterns; qRT-PCR; transcriptome
►▼ Show Figures 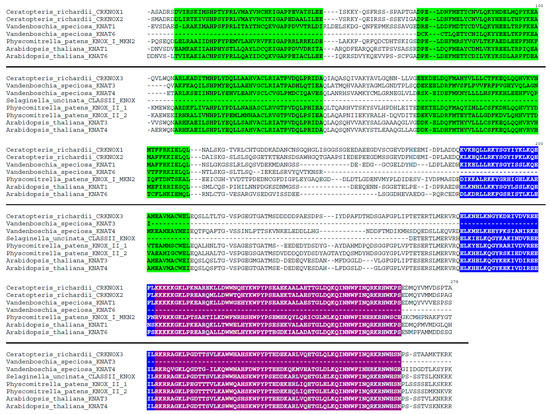