Dietary (co)-exposure to mycotoxins is associated with human and animal health concerns as well as economic losses. This study aims to give a data-based insight from the scientific literature on the (co-)occurrence of mycotoxins (i.e., parent and modified forms) in European core cereals, and to estimate potential patterns of co-exposure in humans and animals. Mycotoxins were mainly reported in wheat and maize showing the highest concentrations of fumonisins (FBs), deoxynivalenol (DON), aflatoxins (AFs), and zearalenone (ZEN). The maximum concentrations of FB1+FB2 were reported in maize both in feed and food and were above legal maximum levels (MLs). Similar results were observed in DON-food, whose max concentrations in wheat, barley, maize, and oat exceeded the MLs. Co-occurrence was reported in 54.9% of total records, meaning that they were co-contaminated with at least two mycotoxins. In the context of parental mycotoxins, co-occurrence of DON was frequently observed with FBs in maize and ZEN in wheat; DON + NIV and DON + T2/HT2 were frequently reported in barley and oat, respectively. Apart from the occurrence of ZEN and its phase I and phase II modified forms, only a limited number of quantified data were available for other modified forms; i.e., mainly the acetyl derivatives of DON. Data gaps are highlighted together with the need for monitoring studies on multiple mycotoxins to identify co-occurrence patterns for parent mycotoxins, metabolites, and their modified forms. View Full-Text
Keywords: modified mycotoxins; fumonisin; aflatoxin; deoxynivalenol; maize; wheat; oat; barley; rice; extensive literature search modified mycotoxins; fumonisin; aflatoxin; deoxynivalenol; maize; wheat; oat; barley; rice; extensive literature search
►▼ Show Figures 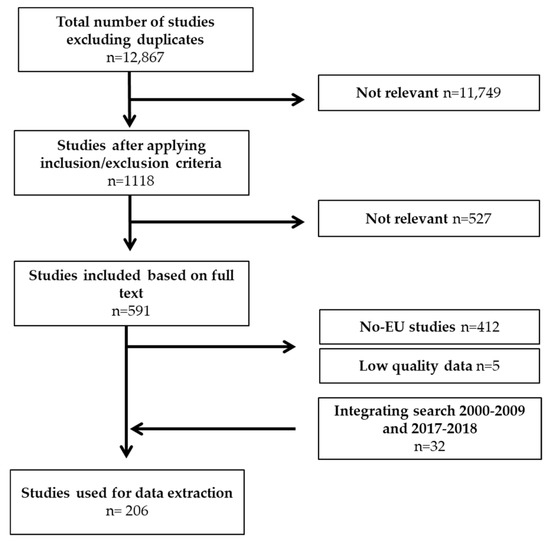