Molecular Epidemiology of Fosfomycin Resistant E. coli from a Pigeon Farm in China

We determined the prevalence and molecular characteristics of fosfomycin-resistant Escherichia coli from a domestic pigeon farm. A total of 79 samples collected from pigeons and their surrounding environments were screened for the presence of fosfomycin resistant isolates and these included 49 E. coli isolates that displayed high-level resistance (MIC ≥ 256 mg L−1) and carried the fosA3 gene on plasmids with sizes ranging from 80 to 370 kb. MLST analysis of these fosA3-positive E. coli isolates indicated the presence of nine sequence types (ST6856, ST8804, ST457, ST746, ST533, ST165, ST2614, ST362 and ST8805) of which ST6856 was the most prevalent (24.5%, 12/49). PFGE combined with genomic context comparative analyses indicated that the fosA3 gene was spread by horizontal transfer as well as via clonal transmission between E. coli in the pigeon farm, and IS26 played an important role in fosA3 transmission. The high prevalence of fosA3 in the pigeon farm and the high similarity of the fosA3 genomic environment between E. coli isolates from humans and pigeons indicated that the pigeon farm served as a potential reservoir for human infections. The pigeon farm was found to be an important reservoir for the fosA3 gene and this should be further monitored. View Full-Text
Keywords: fosfomycin resistance; pigeon farm; E. coli; fosA3; transmission fosfomycin resistance; pigeon farm; E. coli; fosA3; transmission
►▼ Show Figures 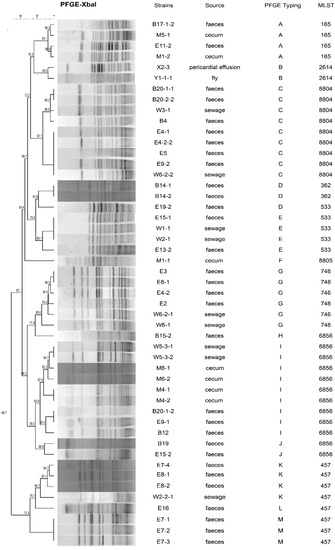