Novel Insights into the Role of Probiotics in Respiratory Infections, Allergies, Cancer, and Neurological Abnormalities
Previous Article in Journal

A urine dipstick test used for prompt diagnosis of urinary tract infection (UTI) is a rapid and cost-effective method. The main objective of this study was to compare the efficacy of the urine dipstick test with culture methods in screening for UTIs along with the detection of the blaCTX-M gene in extended spectrum β-lactamase (ESBL)-producing Escherichia coli. A total of 217 mid-stream urine samples were collected from UTI-suspected patients attending Bharatpur Hospital, Chitwan, and tested by dipstick test strip (COMBI-10SL, Germany) prior to the culture. E. coli isolates were identified by standard microbiological procedures and subjected to antimicrobial susceptibility testing by Kirby Bauer disc diffusion method following CLSI guideline. Primary screening of ESBL-producing E. coli isolates was conducted using ceftriaxone, cefotaxime and ceftazidime discs and phenotypically confirmed by combined disk diffusion test. Plasmid DNA of ESBL-producing strains was extracted by phenol-chloroform method and subjected to PCR for detection of the blaCTX-M gene. Out of 217 urine samples, 48 (22.12%) showed significant bacteriuria. Among 46 (21.20%) Gram negative bacteria recovered, the predominant one was E. coli 37 (77.08%) of which 33 (89.19%) were multidrug resistant (MDR). E. coli isolates showed a higher degree of resistance towards cefazolin (62.16%) while 81.08% of the isolates were sensitive towards amikacin followed by nitrofurantoin (70.27%). Among 14 (37.84%) phenotypically confirmed ESBL isolates, only eight (21.62%) isolates carried the blaCTX-M gene. Sensitivity, specificity, positive predictive value (PPV) and negative predictive value (NPV) of urine dipstick test were 43.75%, 77.51%, 35.59% and 82.91%, respectively. Besides, the use of dipstick test strip for screening UTI was associated with many false positive and negative results as compared to the gold standard culture method. Hence, dipstick nitrite test alone should not be used as sole method for screening UTIs. View Full-Text
Keywords: Escherichia coli; ESBL; sensitivity; specificity; PPV; NPV; blaCTX-M Escherichia coli; ESBL; sensitivity; specificity; PPV; NPV; blaCTX-M
►▼ Show Figures 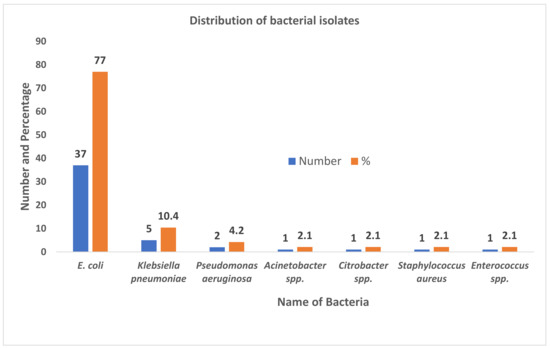