Emergency Department Overcrowding: A Retrospective Spatial Analysis and the Geocoding of Accesses. A Pilot Study in Rome

The overcrowding of first aid facilities creates considerable hardship and problems which have repercussions on patients’ wellbeing, the time needed for a diagnosis, and on the quality of the assistance. The basic objective of this contribution, based on the data collected by the Hospital Policlinico Umberto I in Rome (Lazio region, Italy), is to carry out a territorial screening of the municipality using GIS applications and spatial analyses aimed at reducing—in terms of triage—code white (inappropriate) attendances, after having identified the areas of greatest provenance of improperly used emergency room access. Working in a GIS environment and using functions for geocoding, we have tested an experimental model aimed at giving a close-up geographical-sanitary look at the situation: recognizing the territorial sectors in Rome which contribute to amplifying the Policlinico Umberto I emergency room overcrowding; leading up to an improvement of the situation; promoting greater awareness and knowledge of the services available on the territory, a closer relationship between patient and regular doctor (general practitioner, GP) or Local Healthcare Unit and a more efficient functioning of the emergency room. In particular, we have elaborated a “source” map from which derive all the others and it is a dot map on which all the codes white have been geolocalized on a satellite image through geocoding. We have produced three sets made up of three digital cartographic elaborations each, constructed on the census sections, the census areas and the sub-municipal areas, according to data aggregation, for absolute and relative values, and using different templates. Finally, following the same methodology and steps, we elaborated another dot map about all the codes red to provide another kind of information and input for social utility. In the near future, this system could be tested on a platform that spatially analyzes the emergency department (ED) accesses in near-real-time in order to facilitate the identification of critical territorial issues and intervene in a shorter time to regulate the influx of patients to the ED. View Full-Text
Keywords: dot map; emergency department; emergency room overcrowding; geocoding; GIS applications; Rome; spatial analysis; triage dot map; emergency department; emergency room overcrowding; geocoding; GIS applications; Rome; spatial analysis; triage
►▼ Show Figures 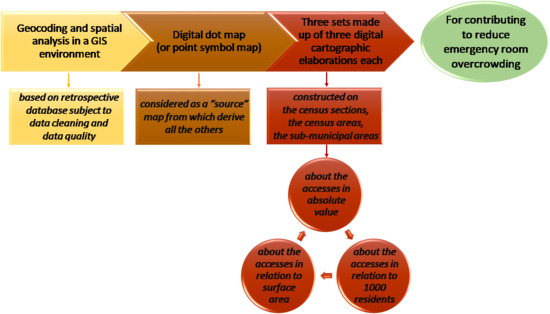