Variability in the Method of Gastrostomy Placement in Children

Although gastrostomy placement is one of the most common procedures performed in children, the optimal technique remains unclear. The purpose of this study was to evaluate variability in the method of gastrostomy tube placement in children in the United States. Patients <18 years old undergoing percutaneous endoscopic gastrostomy (PEG) or surgical gastrostomy (SG) (including open or laparoscopic) from 1997 to 2012 were identified using the Kids’ Inpatient Database. Method of gastrostomy placement was evaluated using a multivariable mixed-effects logistic regression model with a random intercept term and a patient-age random-effect term. A total of 67,811 gastrostomy placements were performed during the study period. PEG was used in 36.6% of entries overall and was generally consistent over time. PEG placement was less commonly performed in infants (adjusted odds ratio [aOR] 0.30, 95%CI 0.26–0.33), children at urban hospitals (aOR: 0.38, 95%CI 0.18–0.82), and children cared for at children’s hospitals (aOR 0.57, 95%CI 0.48–0.69) and was more commonly performed in children with private insurance (aOR 1.17, 95%CI 1.09–1.25). Dramatic variability in PEG use was identified between centers, ranging from 0% to 100%. The random intercept and slope terms significantly improved the model, confirming significant center-level variability and increased variability among patients <1 year old. These findings emphasize the need to further evaluate the safest method of gastrostomy placement in children, in particular among the youngest patients in whom practice varies the most.
Keywords: gastrostomy; children; technique; variability gastrostomy; children; technique; variability

Gastrostomy placement is one of the most common procedures performed in children. Despite the frequency of gastrostomy tube placement, the best method of placement is unknown. The most commonly utilized approaches are an open or laparoscopic surgical gastrostomy (SG) and percutaneous endoscopic gastrostomy (PEG).
PEG is now well established as an effective method of gastrostomy placement in children and adults after its initial description by Gauderer in 1980 [1]. While some studies have shown similar safety between PEG and SG in children, several meta-analyses have recently reported a higher rate of complications with PEG [2,3,4]. These safety concerns have been most pronounced among the youngest patients [5,6].
The goals of this study were (1) to measure the use of PEG and SG over time, (2) to identify the patient population in which PEG is most frequently being used, and (3) to identify potential variability in PEG use between centers providing care to children. We hypothesized that (1) the use of PEG in children has increased over time and that (2) the use of PEG varies significantly between centers.

The Kids’ Inpatient Database (KID) (developed for the Healthcare Cost and Utilization Project [HCUP], Agency for Healthcare Research and Quality) was queried from 1997 to 2012. KID is an all-payer database that is produced every three years and includes a representative sample of all pediatric admissions in the United States. Entries in the database are admissions and not individual patients. The database contains variables to perform weighted calculations and translate results into national estimates [7].

All patients <18 years old at admission were included for analysis. Gastrostomy placement was categorized as PEG or SG (including open or laparoscopic) based on procedural International Classification of Diseases-Ninth Revision (ICD-9) codes. PEG was defined as having an ICD-9 code of 43.11 as a primary or secondary procedure. SG was defined as having an ICD-9 code of 43.19 as primary or secondary procedure. ICD-9 codes do not provide technical details about the method of gastrostomy placement other than specifying whether it was with percutaneous endoscopic approach; therefore patients could not be stratified further with regard to clinically relevant technical differences that exist within PEG and SG (e.g., laparoscopic vs. open, push vs. fascial securement). Children’s hospitals were considered any centers defined by the National Association of Children’s Hospitals and Related Institutions as a children’s general hospital, children’s specialty hospital, or children’s unit in a general hospital.

Survey weights were used to generate contingency tables of patient and center characteristics by method of gastrostomy placement. Bivariate associations between these characteristics and use of PEG were compared using t-tests for continuous variables and chi-squared tests of independence for categorical variables. Multivariable mixed-effects logistic regression models were used to test the association of each covariate with the use of PEG, adjusted for the other covariates. To account for both possible heterogeneity in the use of PEG across centers and possible heterogeneity in the effect of patient age across centers, both a random intercept term and a patient-age random-effect term were included in the model. The variable used to identify individual hospitals across multiple years was only available from 2000 to 2009, and thus only those years were included in the regression analyses.
In order to visualize the distribution of gastrostomy placements across centers that performed more than 20 gastrostomies in the years sampled, the proportion of PEG use by center was graphed for all children and for infants. Missing data in the included covariates were handled using the “missing indicator method,” in which missing data are categorized as unknown, thereby allowing patients’ with missing data to still contribute all other data points to the regression analyses [8]. All tests were two-sided, with statistical significance set at α = 0.05. All analyses were performed using STATA 15.1/MP (College Station, Texas).

The use of PEG by hospital varied from 0% to 100% (Figure 1). This dramatic variability in PEG use by center was seen among both children overall and among infants in particular. In addition, variability across centers was seen among both children’s and non-children’s hospitals.
The use of the random-effect terms significantly improved the models (likelihood ratio test vs. logistic model p < 0.001). The estimate for the variance for the random-effect term for age <1 year was 0.46 (95%CI 0.32–0.67), demonstrating even more pronounced variability in how hospitals approach enteral access for infants. 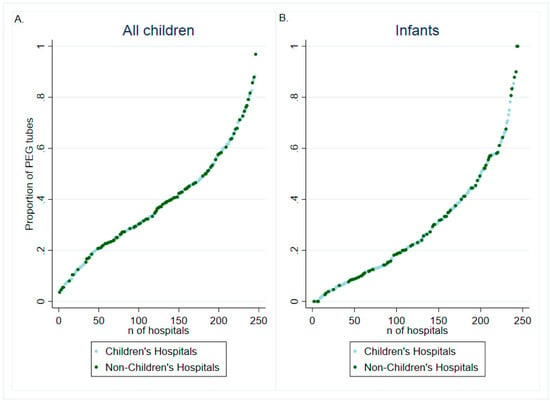 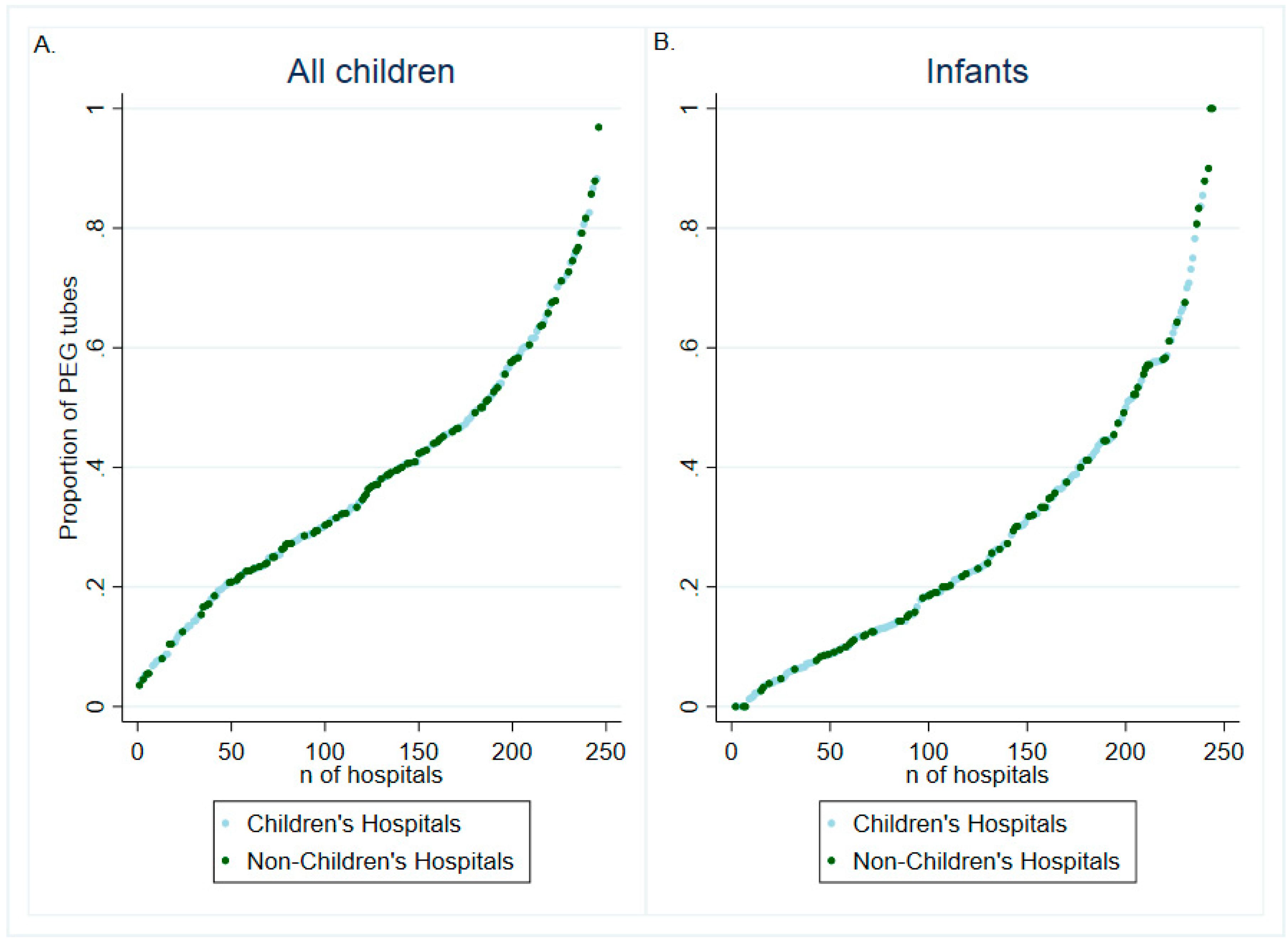