Two Decades of “Horse Sweat” Taint and Brettanomyces Yeasts in Wine: Where do We Stand Now?
Previous Article in Journal

This study was conducted in accordance with the revised version of the Declaration of Helsinki. All procedures in this study were approved by the ethical committee for ergonomic experiments of the National Institute of Advanced Industrial Science and Technology, Japan. Informed written consent was acquired from all participants. Ninety-four volunteers (39 female and 55 male) between the ages of 20 and 29 years (mean age ± standard deviation = 22.29 ± 1.90 years) participated in the experiments; volunteers contacted us after seeing our recruitment announcement on a website for the local community.

The experiments used eight types of non-released canned samples (Asahi Soft Drink, Tokyo, Japan): four sweetened coffee beverages and four sweetened water solutions. Sucrose, sucralose, and acesulfame K were used as sweeteners for the test trials, and stevia was used as the sweetener for the exercise trial.
Sucralose, acesulfame K, and stevia are 600, 200, and 350 times sweeter per unit mass than sucrose, respectively; here, the sweetness of sucrose was defined as 1 [9,10,29]. Most low-sugar canned coffee beverages available in Japan contain milk and have sweetness levels of 40–55. Therefore, we prepared a coffee beverage with milk that had a sweetness level of 50. More specifically, we calculated the concentrations satisfying the following equation: [sample concentration (g/L)] × [sweetness equivalence ratio of each sweetener, relative to sucrose] = 50. Accordingly, we prepared samples sweetened with 5% sucrose, 8.33 × 10−3% sucralose, 2.50 × 10−2% acesulfame K, and 14.28 × 10−3% stevia.
For coffee beverages, we extracted components from 56.5 g of coffee beans (a blend of several medium-dark roasted Arabica beans), ground to a specified size, with deionized water at approximately 95 °C; added sweetener and 120 g of milk (3.6% fat, sterilization at 130 °C, Ohayo Dairy Products, Okayama, Japan) to the coffee extract; and then diluted the mixture in a measuring cylinder to 1 L with deionized water. After canning, each sample was subjected to retort sterilization. For water solutions, we canned deionized water containing each sweetener, and then performed retort sterilization. The canning process was completed using industrial equipment at the Asahi Soft Drink Co. Ltd.
We opened each package of canned sample, salt-free cracker (“Levain Classical non-salt topping”, Yamazaki-Biscuits, Tokyo, Japan), and mineral water (“Asahi oishii mizu Fujisan”, Asahi Soft Drink, Tokyo, Japan) 1 h before the start of the experiment. The salt-free cracker and mineral water were used to clean the participant’s oral cavity [30,31]. A coffee sample or water solution (10 mL) was measured using a macropipette and poured into a paper cup (capacity 90 mL, Part Number SM-90-3, Tokan Kogyo, Tokyo, Japan). We poured one type of sample into each cup. In the interest of food sanitation and aroma retention, we covered the paper cup with a lid (Part Number SM-205-F, Tokan Kogyo), which was removed immediately before the sample was presented to the participants. The salt-free cracker was cut to a size of 2 cm × 2 cm, and one piece of cracker was served in a paper candy cup. Mineral water (10 mL) was measured using a macropipette and poured into a paper cup (capacity 90 mL, Part Number SM-90-3, Tokan Kogyo). Coffee beverages, water solutions, and mineral water were presented at room temperature (approximately 24 °C).

An outline of the time–intensity evaluation system is shown in Figure 1. The structure of this system was detailed by Gotow and colleagues [28,32]. However, to improve the portability of this system, we changed how the voltage output from the load cell was processed. More specifically, after the output voltage was amplified, it was subjected to an analog-to-digital (A/D) conversion at a frequency of 1 kHz on a microprocessor (Part Number Arduino Uno SMD Rev3, Arduino S.r.l., Ivrea, Italy). Average voltage was calculated in time windows of 50 milliseconds, and output to a personal computer via a serial port as a digital value corresponding to a six-point magnitude scale of perceived intensity.

Time–intensity evaluation was performed by one participant at a time in a small room (width 165 cm × depth 275 cm × height 240 cm) shielded from outside noise. The door of the room was closed during measurement. A video camera and intercom were placed inside the room so that the experimenter could monitor and communicate with participants from outside the room. An air cleaner located inside the room was operated continuously to prevent odor retention.
The order of coffee beverage and water solution sessions was alternated between participants. To ensure the reliability and stability of the time–intensity evaluation [33,34], we presented a sample containing stevia in the first trial of each session, which was considered as a training trial. The presentation order of samples containing sucrose, sucralose, or acesulfame K in each session was counterbalanced among participants. The participant rested for approximately 7 min between trials in each session, as well as between the first and second sessions.
All instructions were displayed on the liquid crystal display (LCD) monitor placed in front of the participant. In the first trial of the first session, the participant performed the evaluation according to instructions displayed on the screen, while receiving oral instructions from experimenter. On the first screen of sequential trials, we instructed the participant to evaluate the continuously perceived intensity of sweetness on the tongue after swallowing the samples. On the same screen, based on previous studies [35,36] in which participants reported which part of their anatomy they used to perceived specific sensory attributes (e.g., some participants replied that they perceived vanilla aroma in their mouth), we instructed the participant regarding the part of the anatomy to which they should direct their attention (i.e., “on the tongue”), using an illustration of the sagittal plane of the head with the name of the part labeled (a display is shown in Figure 1). Next, the participant placed a cracker into their mouth to clean the oral cavity and continued masticating it for 15 s before the screen was switched. The participant swallowed the cracker remaining in their oral cavity, and then held 10 mL of mineral water in their mouth. After they transferred the water into the oral cavity, they swallowed it. The participant took 5 mL of sample in their mouth, which they held without swallowing, and then placed the index finger of their right hand into the ring of the time–intensity evaluation system. A countdown was displayed three seconds before the screen showed visual feedback about perceived intensity. The participant swallowed the sample in their mouth at the same time that the countdown reached 0 s and started the time–intensity evaluation of sweetness.
For each sample, participants evaluated perceived intensity over 150 s. We instructed each participant to express the perceived intensity of sweetness by freely operating the pull-ring component of the evaluation system. Participants were not told the length of the evaluation time (i.e., how long they were to evaluate perceived intensity). Instead, to inform the participant of the time remaining in each trial, the screen displayed an indicator showing the extent of progress.

In this study, we regarded the time when the screen was switched to visual feedback of perceived intensity as the starting point of the time–intensity evaluation (i.e., 0 s). We divided the evaluation period from 0 s to 150 s into 75 windows of 2 s each, and calculated the average perceived intensity in each time window. We conducted statistical analysis using these average values.
To investigate whether temporal profiles of sweetness differed among the three types of samples (sucrose-sweetened, sucrose-sweetened, and acesulfame K–sweetened samples), two-way repeated measures analysis of variance (ANOVA) for each solvent session (coffee beverage and water solution sessions) was performed for average values of perceived intensity, with sweetener and time as within-subject factors. Simple effects tests were conducted based on the significance of results obtained with ANOVA. Additionally, when temporal profiles of sweetness did not differ among three types of coffee beverages, we performed two-way repeated measures ANOVA for each sweetener for the average values of perceived intensity, with solvent session and time as within-subject factors.
We used IBM SPSS Statistics 23 (IBM Japan, Tokyo, Japan) for statistical analysis, and considered p values less than 0.05 as statistically significant.

3.1. Comparison of Temporal Profiles of Sweetness among Samples in Each Solvent Session

3.2. Comparison of Temporal Profiles between Solvent Sessions for Each Sweetener

4.2. Temporal Profiles of Sweetness of Sweeteners in Water Solutions

As controls in this study, we used three types of water solutions. The temporal profiles of sweetness significantly differed among these water solutions. This result was inconsistent with the results of some studies reporting that the duration of sweetness does not differ among sucrose, sucralose, and acesulfame K [17,18], and another study reporting that the duration of sweetness was longer for sucrose than for sucrose and acesulfame K [56]. The temporal profiles of sweetness of various sweeteners vary with concentration [57], and perceived intensities of sensory attributes differ among untrained and trained panelists [58,59]. These factors might explain why results differed between this and previous studies.

This study was mainly funded by Asahi Soft Drink Co., Ltd., which had no control over the interpretation, writing, or publication of this work. This study was also partially supported by JSPS KAKENHI Grant Numbers 26245073 and 16K04418.

This study was mainly funded by Asahi Soft Drink Co., Ltd.; this sponsor had no control over the interpretation, writing, or publication of this work. 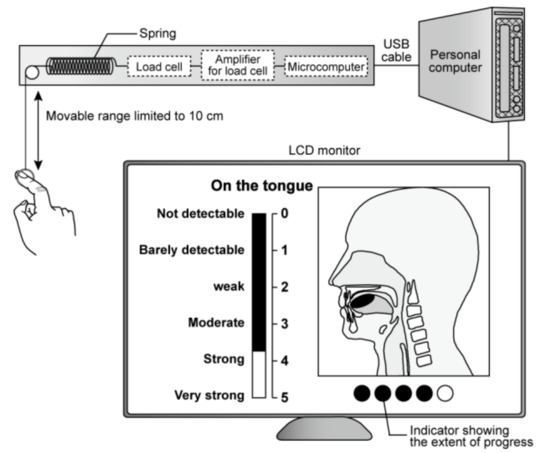 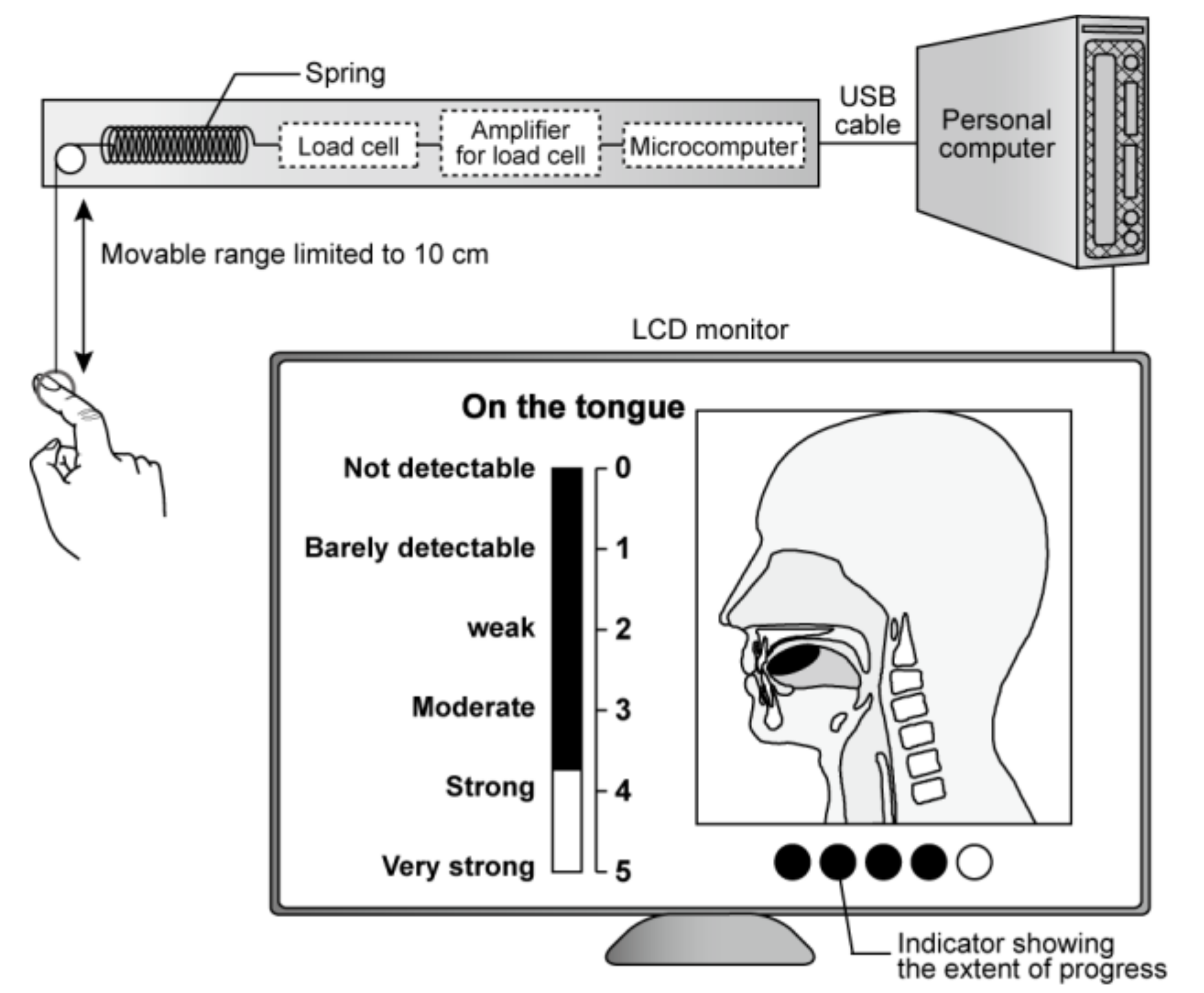 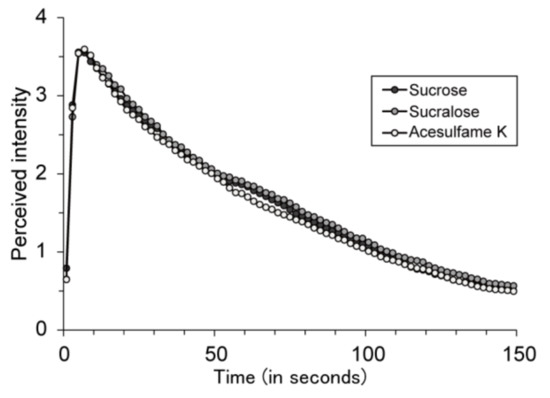 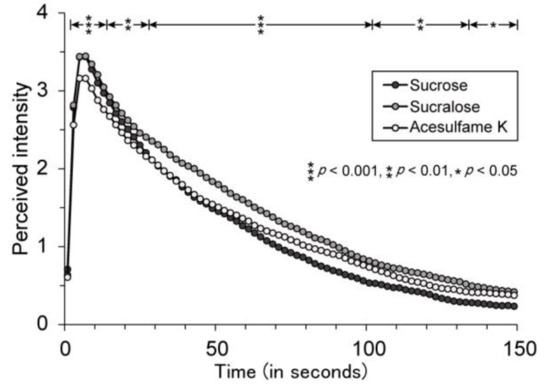 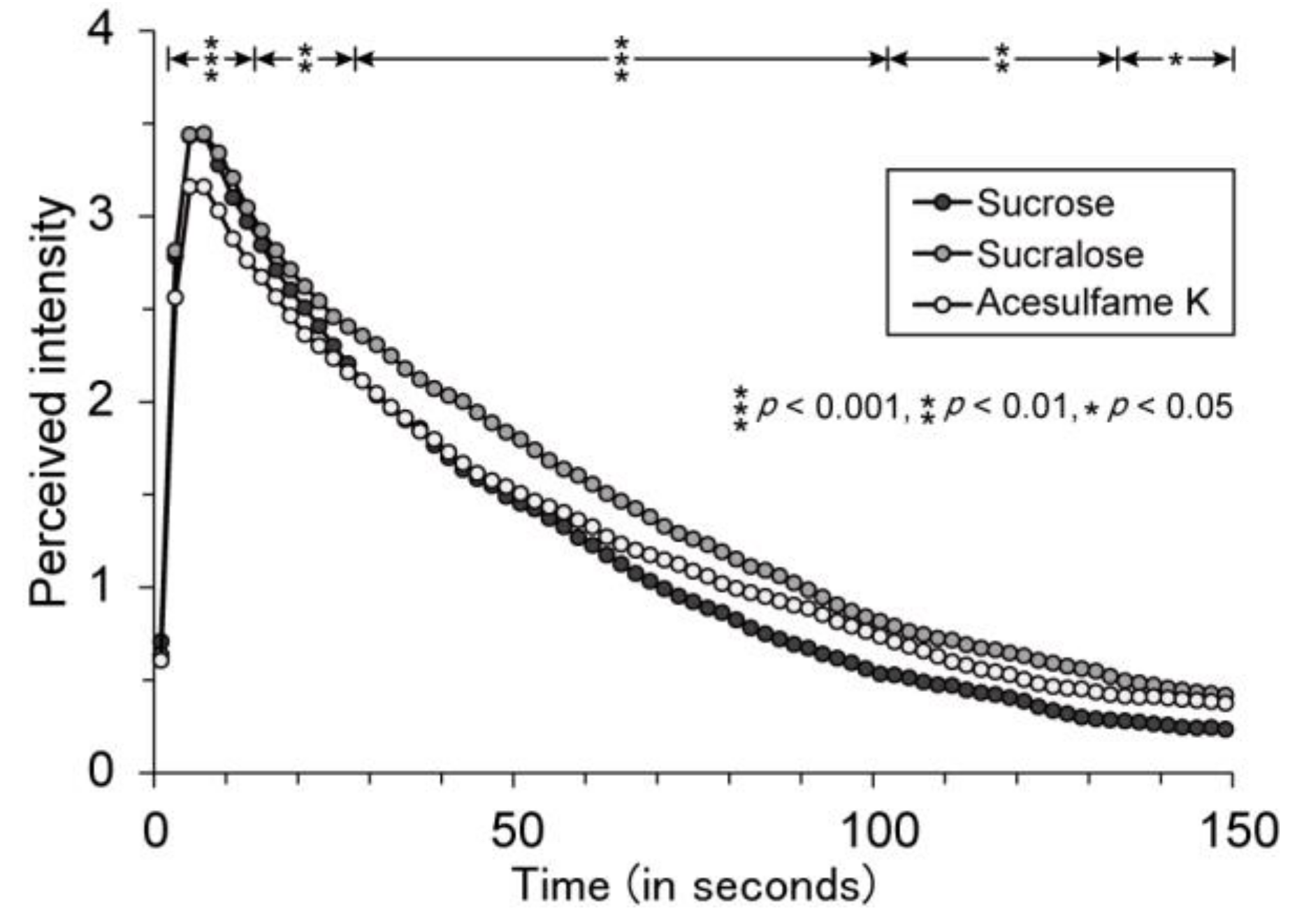