Polycyclic aromatic hydrocarbons (PAHs) constitute several hundred various chemical compounds. The Environmental Protection Agency (US EPA) has included sixteen of these compounds in its list of persistent organic pollutants (POPs) [1]. PAHs, which are formed from the incomplete combustion of different organic matters, include roasted meat, fossil fuels and coal [2]. Milk is a substance that may contain PAHs due to its fat content as PAHs are lipophilic [3]. The exposure of animals to PAHs happens mainly by the inhalation of particulate matters, intake of dietary food or contact with any materials contaminated with PAHs [4]. PAHs are largely excreted in urine or feces in a hydroxylated form after their adsorption in the body [5].
In addition, the lipophilicity of PAHs results in their accumulation in animal adipose tissue and excretion in milk [6]. Milk and dairy products are the main components of the daily diet of humans and it is also of special importance as it can act as a complete food source [7]. Besides, milk represents a key component of the everyday diet for infants, school-age children and older children [8]. European Union (EU) regulations set a concentration limit of less than 1 mg/kg of Benzo[a]Pyrene (BaP) for baby foods and processed cereal-based foods for infants and young children [9]. There are many investigations of PAHs contaminating and transforming in different types of milk products.
Unfortunately, in some cases, the quality of milk and its related products does not necessarily comply with the regulations set by WHO (World Health Organization) and may contain remarkable amounts of pollutants, such as PAHs [10]. The concentration levels of PAHs in the complex matrices of milk, which has been specially created, has raised the need to develop sensitive and selective analytical methods for routine evaluation in order to ensure that milk products sold at the nearby markets are safe for consumption [3]. Several strategies for the extraction, purification and quantification of organic pollutants in the matrices of fatty samples, such as milk, have been previously outlined in the literature [5].
The QuEChERS (Quick, Easy, Cheap, Effective, Rugged and Safe) method [11] has become an crucial and extensively used technique in the analysis of various chemical residues with diverse matrices, including fatty foods, such as milk, cheese and butter [12].
Recently, the efficiency of this method has been assessed for the extraction of PAHs. Exceptional recovery and repeatability was obtained with this technique for a variety of organic pollutants. Consequently, QuEChERS may be a powerful, flexible and reasonably-priced choice for the multi-residue analysis of PAHs in milk samples [2]. In addition, tandem mass spectrometry (MS/MS) is an efficient technique for the analysis and determination of the residue from pollutants and can be used for the recognition of target compounds even in complex matrices containing components that cause extreme interference, such as the fat in milk [3]. To the best of our knowledge, there are inadequate data regarding the health effects of and protocols for the analysis of pollutants found in dairy products sold in Egyptian markets and there is a lack of concern from the regulatory bodies regarding this issue. Thus, it is important to carry out this study that aims to assess the PAHs concentration based on QuEChERS extraction and GC–MS/MS for simultaneous PAHs determination and their distribution in different dairy milk products in Egypt; and to evaluate the health hazards associated with the consumption of these products.
This study was carried out in the Regional Center for Food and Feed at the Agricultural Research Center in Egypt during 2017.

The standard solution of 13 U.S. EPA PAHs was prepared at a concentration of 10 μg/mL in acetone. The prepared solutions were stored at 4 °C in the dark and were stable for approximately three months. The calibration standards of PAHs were prepared by accurate dilution of the stock solution with acetone.

A variety of milk samples from commercially available milk brands, which were packed at different dates and had different batch numbers, were collected from different places in different locations in Great Cairo, Egypt. All collected samples were numbered from 1 M to 24 M. The information, including the types, origin and compositions of the samples, is displayed in Table 1. Samples were delivered to the laboratory in glass containers with plastic caps.
Samples were stored in a refrigerator at approximately 4 °C to prevent a change in the volume due to evaporation. The samples were taken out of the refrigerator and left at room temperature the next day before starting analysis.

2.4. Extraction and Clean Up

Five grams of the homogenized sample were transferred to a QuEChERS extraction tube and were subsequently shaken for 1 min. A mixture of Hex: Ace (15 mL; 1:1 v/v) was added to the extraction tube, which was followed by shaking for a few seconds. After this, the QuEChERS extraction foil packet contents (6 g and 1.5 g of sulfate and acetate salts of magnesium and sodium, respectively) were added to the mixture [12]. Sodium chloride was subsequently added to QuEChERS extraction tube to decrease the solubility of PAHs and enhance their separation in the organic solvent phase [3]. The mixture was shaken vigorously for 1 min and the extract was centrifuged at 2500× g for 5 min in order to remove the upper layer of the Hex:Ace mixture. Approximately 6–8 mL of the 15-mL total volume of Hex: Ace was separated into the upper layer. The isolation of PAHs was performed using a normal phase mode of solid-phase extraction (SPE) [13]. Activated silica gel was loaded into a glass-chromatographic column, which was followed by the addition of 1 g of Na2SO4. After this, the column was conditioned with n-hexane. The concentrated extracts were loaded into the column after dissolving them in 5 mL of n-hexane, before they were finally eluted with 50 mL of n-hexane [13]. The eluents were concentrated using a rotary evaporator and then re-dissolved in 0.5 mL of n-hexane for GC analysis [13].

Analyses were carried out by using a 7000 Agilent triple Quadrupole MS system coupled with a 7890A GC, which was equipped with a split/splitless injection port, an auto sampler model Agilent 7693 and electronic ionization. A HP-5MS 5% Phenyl Methyl Siloxane, Agilent 19091s-433 capillary column was used (30 m × 0.25 mm Internal diameter (I.D.) and 0.25-μm film thickness).
Helium (99.99%) was used as the carrier gas at a linear flow rate of 1.8 mL/min. An initial temperature of 70 °C was used and raised at a rate of 15 °C/min to 250 °C, before being finally increased at the rate of 5 °C/min to 315 °C with a holding time of 5 min. The temperature was 270 °C for the ion source, 150 °C for the quadrupole and 315 °C for the transfer line. The mass spectrometer was operated in full scan mode ranging from 50 to 320 m/z with an electron impact ionization energy of 70 eV. The identification of PAHs was made on the basis of GC retention time, which was compared to the available standard solutions of PAHs and used the characteristic ions that were monitored in analyses.
The base peak of an individual PAH was chosen as the quantifier ion and other two most intense ions in the mass fragmentation of an individual PAH were carefully chosen as the qualifier ions for the purpose of identification [14]. All target compounds were recognized by GC-MS/MS in the selected ion monitoring mode using the quantifier ion and qualifier ions with their limit of detections (LOD), which are shown in Table 2. The estimated concentrations of the 24 extracted milk samples are shown in Table 3.

The obtained data showed that the total amount of 13 PAHs was within the range of 1.3–8.2 µg/g. The obtained results proved that the highest mean levels of PAHs were detected in powdered milk (8.2 μg/g), followed by ultra-heat treatment (UHT) milk and milk beverages (6.07 μg/g). The lowest level was detected in unsmoked cheese and yogurt (1.3 μg/g). The mean EDI in terms of BaP and seven PAHs was higher for small infants than for older children and was higher than the critical limits proposed by EFSA and EPA.
Therefore, the study deduced that there are potential hazardous and dangerous effects posed by the consumption of milk and dairy-based products, especially for infants and babies. It is thus recommended to have firm regulations concerning their production processes. Meanwhile, care should be taken regarding the consumption of dairy products by young children in order to avoid health problems.

The author declares that there is no conflict of interests regarding the publication of this case study article. 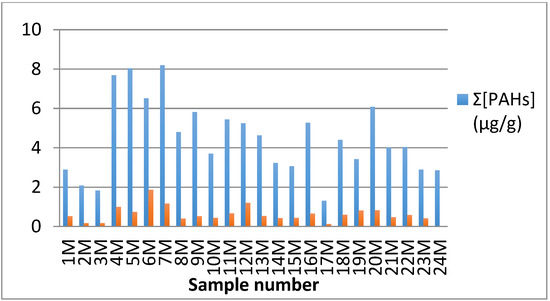 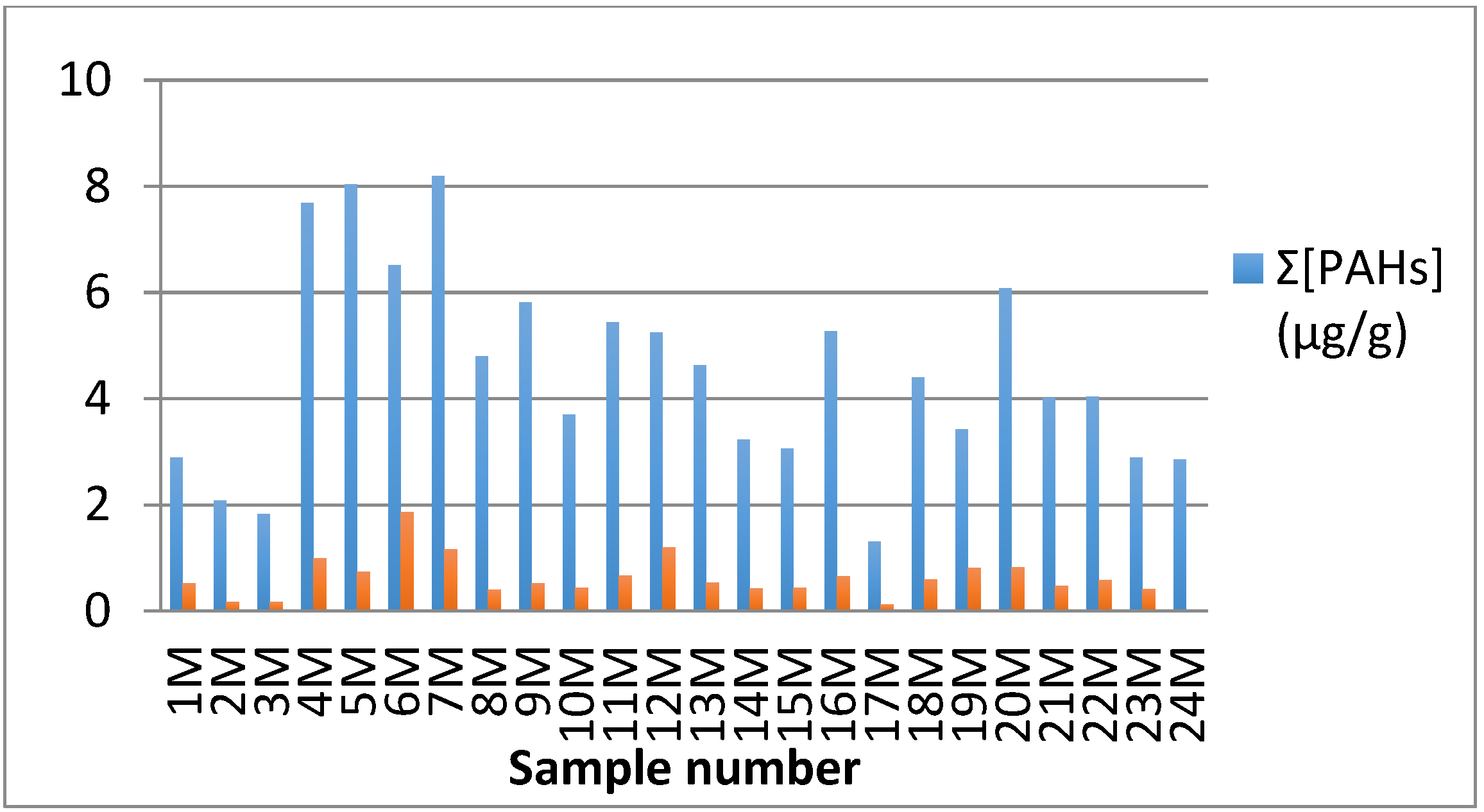