Our 10-year-old female patient was referred to the Department of Pediatric Surgery at MONIKI Hospital, Moscow, Russian Federation, for treatment of recurrent pneumonia of the left lower lobe of the lung. Her body weight at admission was 29 kg. During the past three years, the girl had undergone antibiotic treatment twice for left-sided pneumonia. Her medical history revealed that she had suffered from cough and fever ranging from 38.0° to 39.4° two weeks before being admitted to a regional pediatric hospital. She was diagnosed with severe acute respiratory syndrome (SARS) and tracheitis and received antibiotic treatment. Despite treatment for two weeks, her condition did not improve, and thus, she was referred to a regional hospital for intravenous antibiotic treatment of refractory pneumonia of the left lower lobe. CT scanning of the thorax revealed pneumonia of the inferior lobe of the left lung with localized destruction of lung parenchyma accompanied by pleural effusion. Subsequently, the girl was transferred to the Department of Pediatric Surgery at MONIKI Hospital for further treatment.
At admission to MONIKI Hospital, the girl was in poor general condition. Auscultation of the chest revealed weakened respiration sounds in the inferior area of the left side of the thorax. We administered intravenous antibiotics and physiotherapy. We suspected pulmonary sequestration as the cause of recurrent pulmonary infection and ruled out possible differential diagnoses.

We performed multi-slice, contrast-enhanced CT scanning of the thorax and upper abdomen with subsequent multiplanar reconstruction. The lung tissue exhibited massive infiltration with cavities measuring 3 mm to 28 mm at the posterior-basal segment S10 of the left lower lobe (Figure 1).
There was no communication of the affected lung parenchyma with bronchi of the left inferior lobe. We noted no further infiltrative changes in the remainder of the left and right lungs. Contrast-enhanced CT scanning with 3D reconstruction showed normal configuration of the thoraco-abdominal aorta, celiac trunk, and renal arteries. The celiac trunk originated from the abdominal aorta at the level of the intervertebral space Th12-L1. The systemic feeding artery (proximal diameter of 5 mm) originated from the celiac trunk. This artery supplied the pulmonary intralobar sequestration in the inferior lobe of the left lung (Figure 2a,b).
When comparing the chest CT images obtained by the regional hospital with our contrast-enhanced CT image, we noted a partial regression of dystelectatic areas within the left inferior lobe of the lung, reduced fluid within the cyst-like lesions, and reduced pleural effusion. Thus, we established the diagnosis of intrapulmonary sequestration of the inferior lobe of the left lung complicated by infection and pleural effusion.
The child’s condition improved slowly. We decided to postpone surgical treatment for two months to allow pneumonia to resolve.

We performed left-sided posterolateral thoracotomy in the seventh intercostal space. The intrapulmonary sequester was characterized by an unventilated area of lung tissue at the posterior-basal segment (S10) of the inferior lobe. In accordance with CT findings, the pulmonary sequester was supplied by an arterial vessel with a diameter of 5 mm. The artery traversed the diaphragm. We ligated the artery carefully before transection (Figure 3).
We carried out atypical resection of the sequester located in the inferior lobe of the left lung using a linear stapler. Histologic examination confirmed intralobar pulmonary sequestration with bronchiectases of different sizes, emphysema, and enlarged bronchi. Focal clusters of macrophages and lymphoid infiltrates were observed in the interalveolar septum and inside the lumen of alveoli.

The postoperative course was without complications. Plain X-ray studies of the thorax obtained before the girl was discharged from the hospital confirmed the absence of infiltrates and pneumothorax (Figure 4).
The diaphragm was in normal position, and sinuses were free of fluid. Blood tests did not show any signs of inflammation.

7.1. Cystic Type with Formation of Abscess

The clinical picture of this type is characterized by chronic infection of lung lobes in the vicinity of the pulmonary sequester. Affected patients usually suffer from dry or productive cough for prolonged periods of time. Upon aggravation of infection, patients expectorate purulent sputum, suffer from chest pain at the affected site, and experience shortness of breath on exertion.

This type is characterized by minimal or absent clinical symptoms. Pulmonary sequestration is usually diagnosed incidentally when obtaining plain X-ray images of the thorax for other reasons. X-Ray images demonstrate a homogeneous, intense infiltrate with clearly defined margins.

This type typically occurs because of a secondary communication between the sequester and bronchial tree after recurrent bacterial infections and suppurative destruction of lung parenchyma. The clinical picture corresponds to a chronic, recurrent inflammatory process of the lung complicated by pleural infection and effusion.
Pulmonary sequestration can be located in several regions of the thoracic and abdominal cavity [3].
To confirm the diagnosis of pulmonary sequestration and to follow up patients with congenital thoracic malformation (CTM) detected prenatally, it is necessary to carry out angiography or contrast-enhanced CT scanning of the thorax with subsequent reconstruction of the thoraco-abdominal aorta and its branches. These imaging studies demonstrate the anomalous feeding artery [6,7,8,9,20].
The complications of pulmonary sequestration comprise infection, hemoptysis, pneumothorax, sudden respiratory compromise, and malignancies arising from the altered lung tissue [20]. The most frequently observed manifestation of intrapulmonary sequestration in children is recurrent infection, whereas in young adults, hemoptysis prevails [1].
Open thoracotomy or video-assisted thoracic surgery (VATS) with atypical resection of the pulmonary sequestration area or lobectomy is the treatment of choice [21]. Many authors still prefer open surgical access over thoracoscopic resection in children suffering from pulmonary sequestration. Open surgery permits easier control of hilar structures and ligation of the feeding artery even in the presence of dense postpneumonic adhesions and infiltrations. Correct identification and ligation of the aberrant artery is of crucial importance to avoid intra-operative bleeding complications [21]. Therefore, VATS is considered a valid surgical option in children suffering from pulmonary sequestration without dense adhesions of the hilar and diaphragmatic regions [21]. In our patient, we opted for thoracotomy because the child had suffered several pulmonary infections in the left lung segment 10.
In recent years, thoracoscopy and VATS have gained increasing acceptance [7,22,23,24,25]. Laparoscopy is used for resection of ectopic forms of pulmonary sequestration [9,10]. Laparoscopy allows for improved visualization of ectopic extralobar pulmonary sequester located in the hiatal region of the diaphragm [9,10]. In a series of ectopic extralobar pulmonary sequestrations described by Joyeux et al., three lesions were located at the hiatal region, and three were located intra-abdominally [10]. The authors excised one lesion thoracoscopically and five lesions laparoscopically, but in two of these patients, the laparoscopic approach had to be converted to open abdominal surgery [10].
Some authors recommend endovascular embolization of pulmonary sequesters as a minimally invasive treatment option [11,26]. However, long-term outcome of pulmonary sequesters treated by embolization has not been studied in larger series of young patients [27]. Zhang et al. reported good outcomes after endovascular treatment of pulmonary sequesters in six adult patients and one child [28]. In contrast, Chakraborty et al. reported recurrence rates between 25% and 47% after endovascular intervention [29].

Pulmonary sequestration may mimic recurrent pneumonia in children and may cause massive hemoptysis in young adults. All patients with suspected or prenatally confirmed CTM should undergo contrast-enhanced chest CT in early childhood. When performing resections or operating on lung malformations in children, it is of utmost importance to consider a possible pulmonary sequester supplied by a large, aberrant systemic artery. Inadvertent injury to the feeding artery of a pulmonary sequester can result in life-threatening intra-operative hemorrhage. Therefore, pre-operative embolization of the feeding artery is recommended by some authors. Other authors suggest cleaning and draping the skin of the upper abdominal and thoracic wall before operating pulmonary sequesters. This allows for emergency laparotomy if a bleeding arterial stump retracts into the retroperitoneum.

We obtained no funding for this study.

Ethical review and approval were waived for this case report, due to the nature of this article (case report).

Informed consent was obtained from the parents of the patient involved in the study. 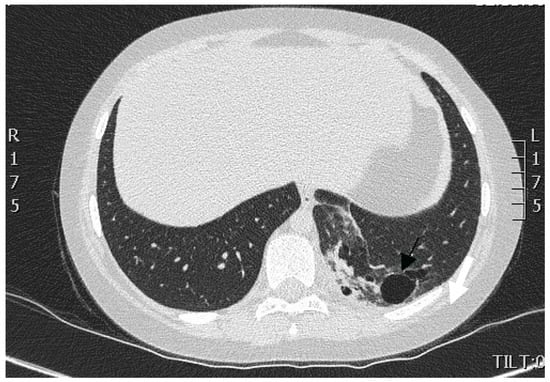 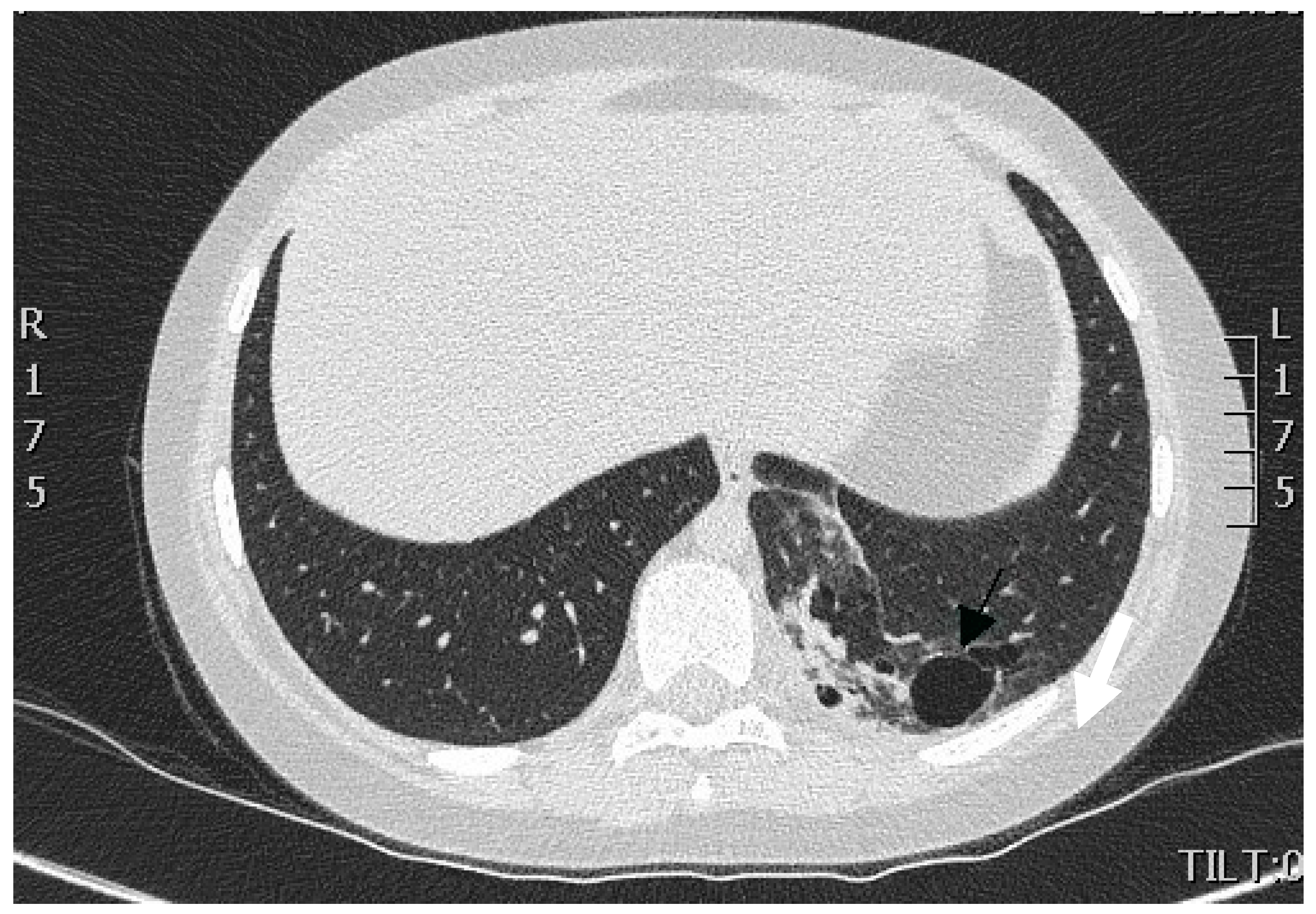 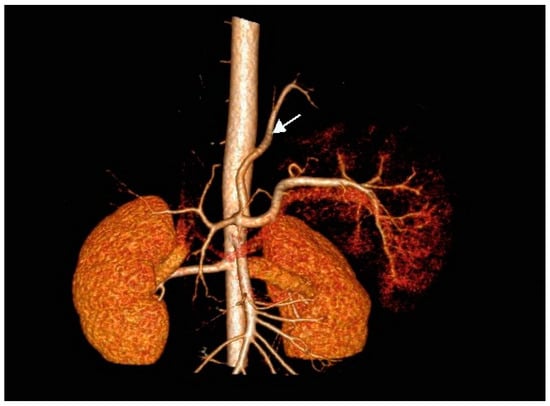 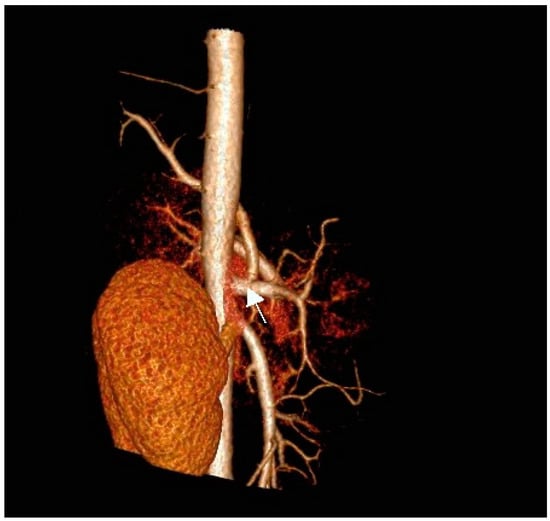 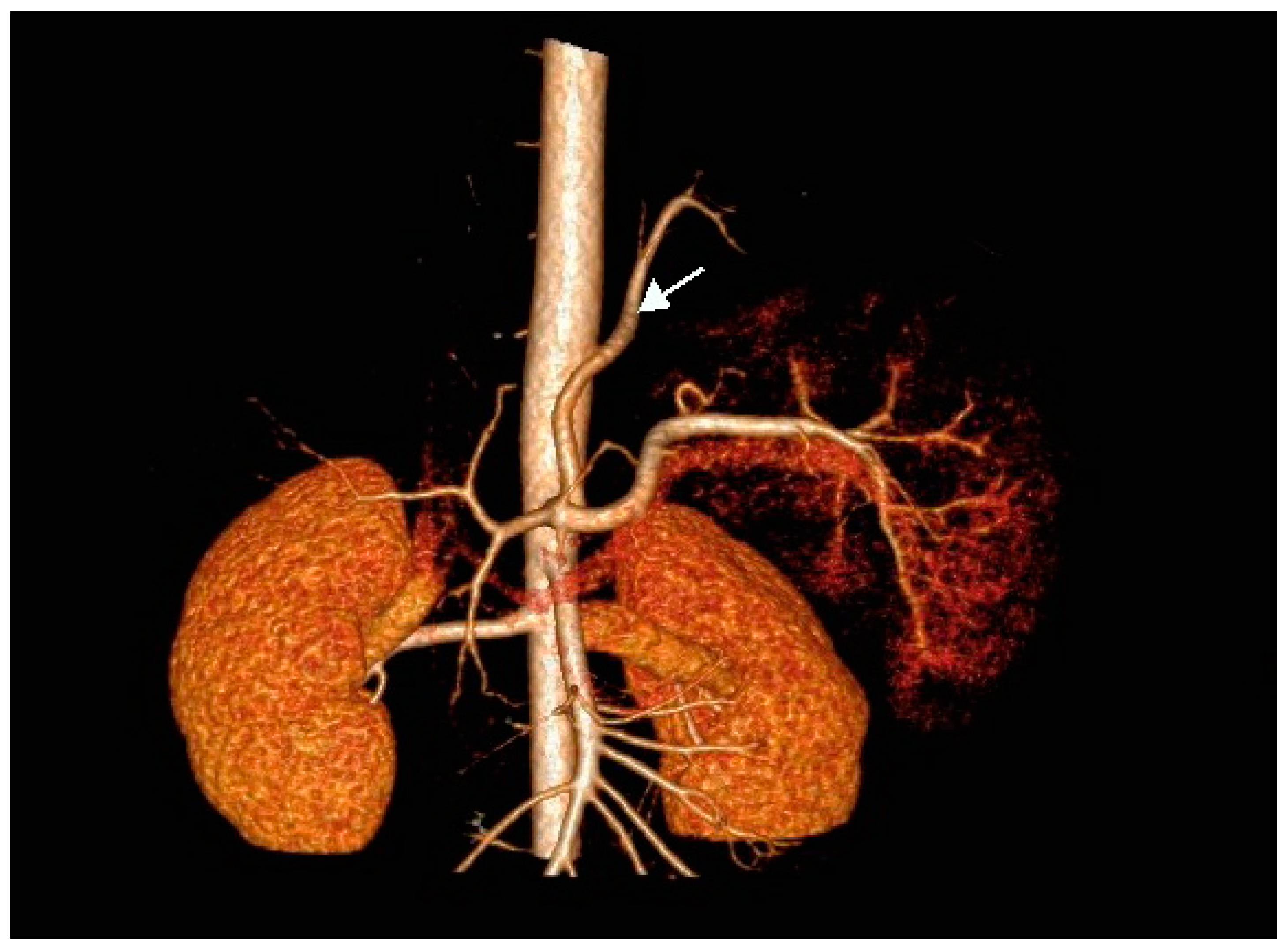 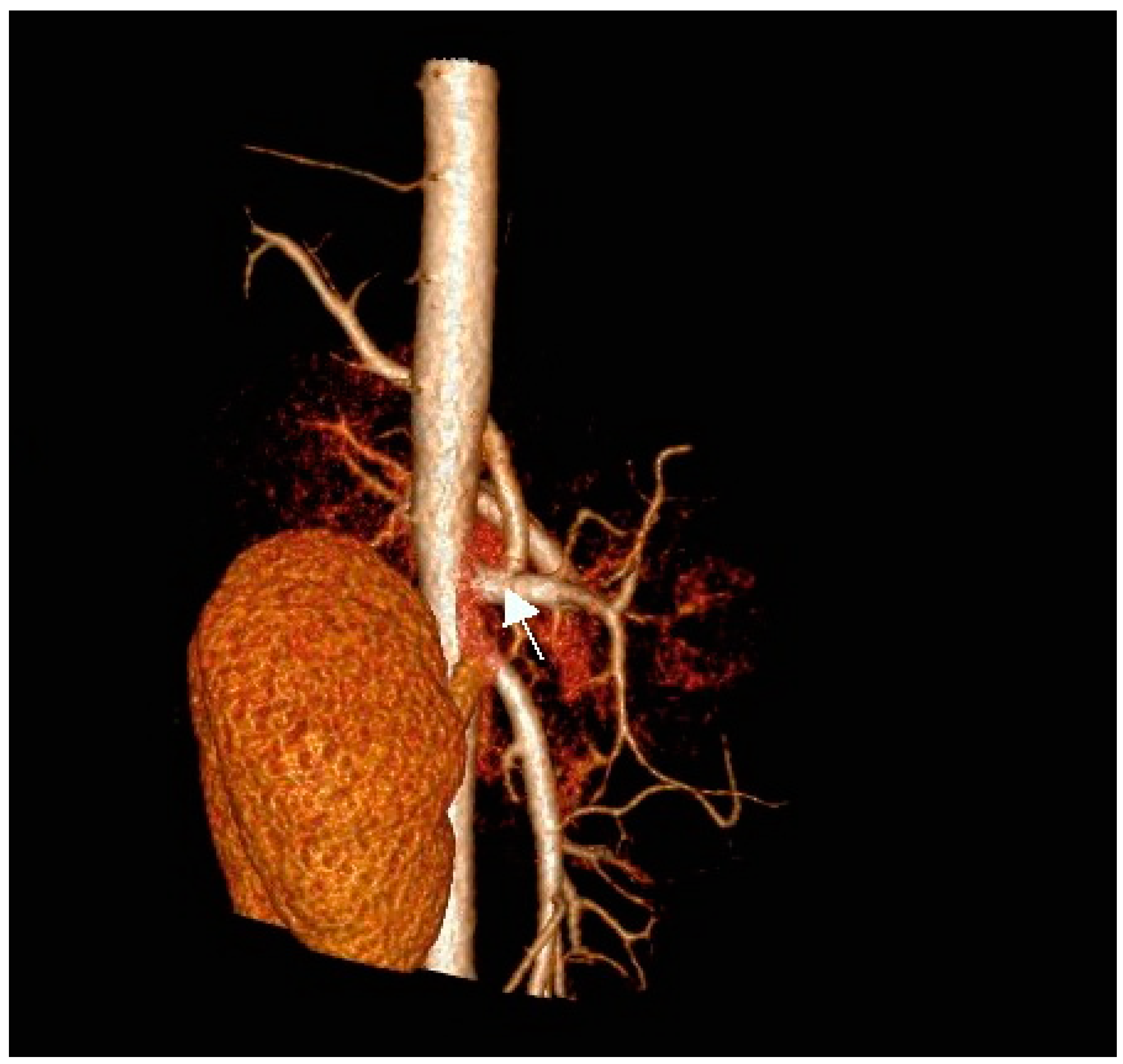 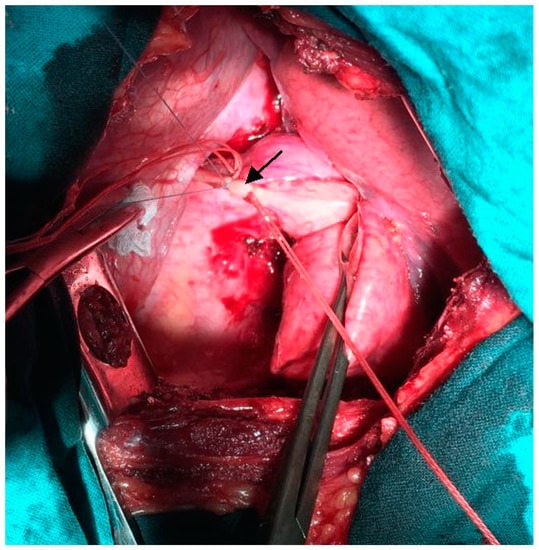 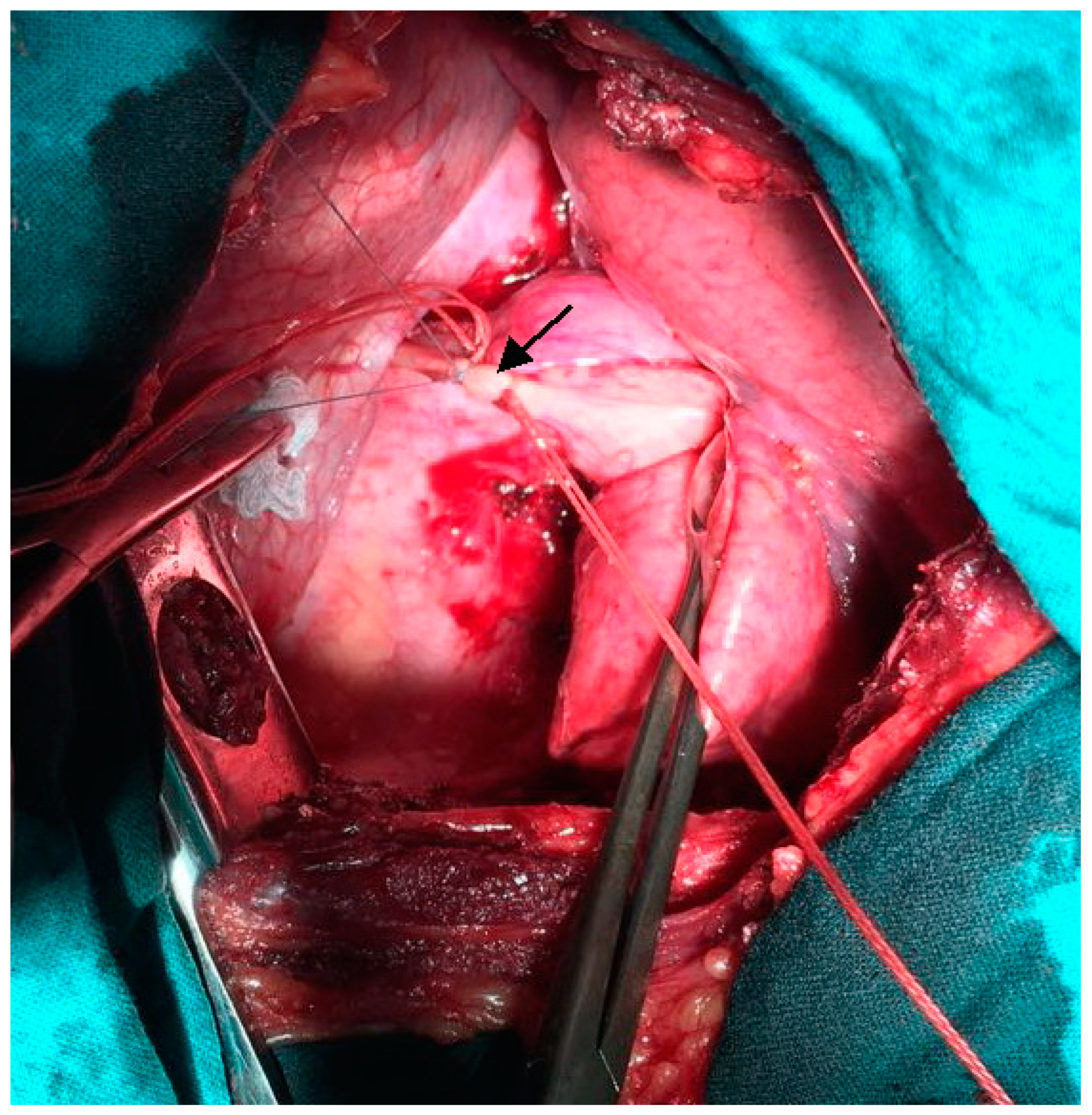 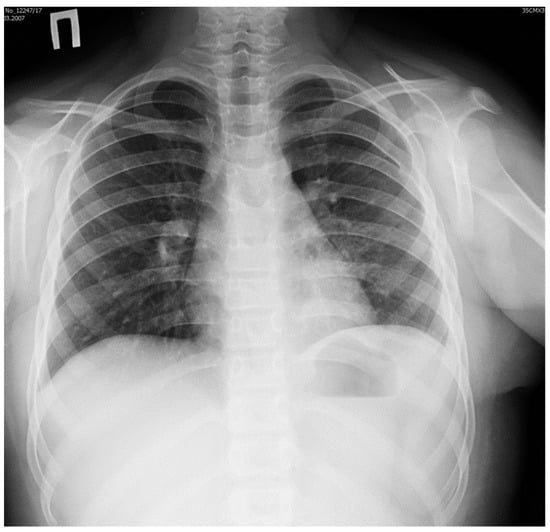 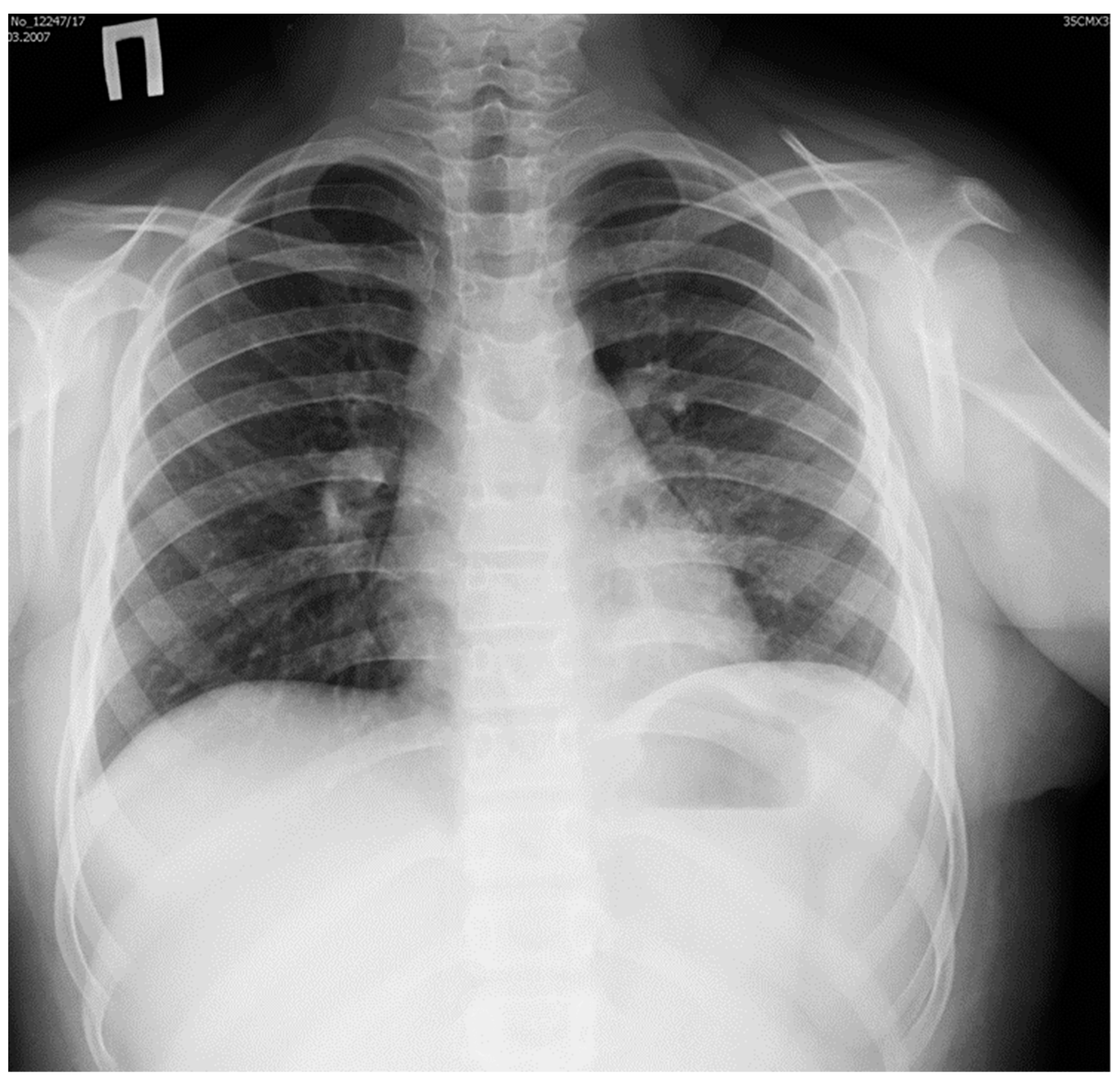