Periodontitis is an oral inflammatory disease that not only affects the integrity of local tooth-supporting tissues but also impacts systemic health. A compositional shift in oral microbiota has been considered as the main cause of periodontitis; however, the potential mechanism has not been fully defined. Herein, we investigated the role of CCAAT/enhancer-binding protein β (C/EBP β), a member of the C/EBP family of transcription factors, in human periodontal ligament cells (hPDLCs) exposed to Porphyromonas gingivalis (P. gingivalis) lipopolysaccharide (LPS). RT-PCR and Western blotting analysis showed that the expression of C/EBP β was significantly increased in hPDLCs stimulated with LPS stimuli. Overexpression of C/EBP β by the recombinant adenoviral vector pAd/C/EBP β markedly increased the expression of the pro-inflammatory cytokines IL-6 and IL-8, and matrix metalloproteinases (MMP)-8 and -9 in hPDLCs in response to LPS. Furthermore, the activation of endoplasmic reticulum (ER) stress was confirmed in LPS-stimulated hPDLCs by measuring the expression of the ER stress marker molecules protein kinase-like ER kinase (PERK), eIF2α, GRP78/Bip, and C/EBP homologous protein (CHOP). The ER stress inhibitor salubrinal repressed, but inducer tunicamycin enhanced, the production of IL-6, IL-8, MMP-8, and MMP-9 in hPDLCs. Additionally, ER stress inducer tunicamycin significantly increased the expression level of C/EBP β in hPDLCs. Blocking of C/EBP β by siRNA resulted in a significant decrease in the secretion of IL-6 and IL-8 and expression of MMP-8 and MMP-9 induced by tunicamycin treatment in hPDLCs. Taken together, ER stress appears to play a regulatory role in the inflammatory response and extracellular matrix (ECM) degradation in hPDLCs in response to LPS stimuli by activating C/EBP β expression. This enhances our understanding of human periodontitis pathology. View Full-Text
Keywords: periodontitis; C/EBP β; endoplasmic reticulum stress; human periodontal ligament cells; P. gingivalis LPS periodontitis; C/EBP β; endoplasmic reticulum stress; human periodontal ligament cells; P. gingivalis LPS
►▼ Show Figures 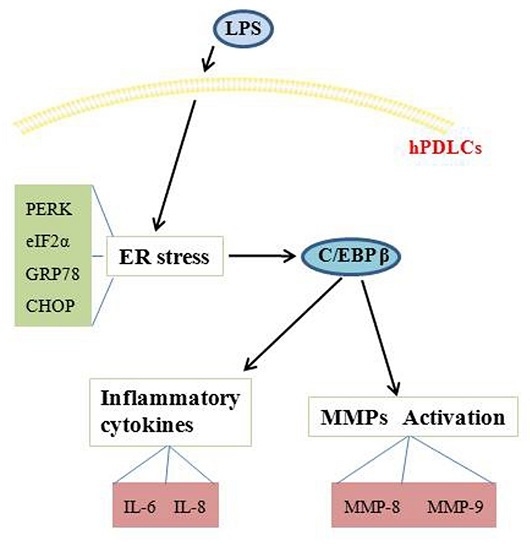