Research has firmly established that infection by human immunodeficiency virus (HIV) leads to structural disruption in secondary lymph organs (SLOs) and that IL-7 expression by SLOs is downregulated in simian immunodeficiency virus (SIV)-infected rhesus macaques. However, the foregoing has not been demonstrated in HIV-infected patients. As well, SLO-produced chemokines and cytokines, other than IL-7, have not been tested. In this study, SLOs in HIV-infected patients exhibit decreased levels of lymphoid cytokines, such as IL-7 and C–C motif chemokine ligand 21 (CCL21), due to lower expression of lymphotoxin (LT)-β. Previous research has shown that LT-β is produced mainly by CD4+T cells in rhesus macaques, while our study found the same level of LT-β expressed by CD4+T and CD8+T cells in humans. CD8+T cells substitute for depleted CD4+T cells LT-β production. Only the total number of CD3+T cells can account for the majority of LT-β in human SLOs. This study indicates a possible mechanism and a potential target for improvement of SLO function in HIV-infected patients, a novel adjuvant therapy for AIDS. View Full-Text
Keywords: human immunodeficiency virus (HIV) infection; secondary lymph organs; CCL21; IL-7 human immunodeficiency virus (HIV) infection; secondary lymph organs; CCL21; IL-7
►▼ Show Figures 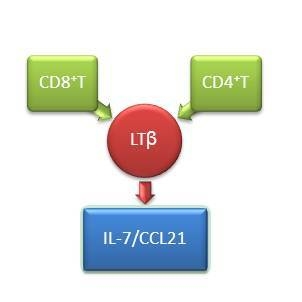