Antiallergic Phorbol Ester from the Seeds of Aquilaria malaccensis

Thymoquinone (THQ) is a major component of black seeds. Given that both THQ and black seeds exhibit anti-cancer and anti-inflammatory activities, we hypothesized that THQ will affect cancer-associated thrombosis (CAT), which is primarily triggered by tissue factor (TF) and inflammation. The effect of both black seed-extracted and purchased (“pure”) THQ on normal blood coagulation was tested with in vitro thromboelastography (TEG) and activated partial thromboplastin time (aPTT) coagulation assays. The effect of pure THQ on CAT was tested with aPTT assay using pancreatic cancer cell lines that are either positive or negative for TF, and with TEG assay using lipopolysaccharide as an inflammatory trigger. Additionally, the direct effect of THQ on the inactivation of factors IIa and Xa was assessed. Since TNF-α facilitates crosstalk between inflammation and thrombosis by triggering the NF-κB pathway, we tested THQ’s ability to interfere with this communication with a luciferase assay. Both extracted and pure THQ had minimal effects on normal blood coagulation. Pure THQ reversed CAT initiated by both TF and inflammation to basal levels (p < 0.001). Mechanistically, while THQ had minimal to no effect on factor IIa and Xa inactivation, it strongly reduced the effects of TNF-α on NF-κB elements (p < 0.001). THQ has a minimal effect on basal coagulation and can reverse CAT in vitro, possibly by interfering with the crosstalk between inflammation and coagulation. This study suggests the utility of THQ as a preventative anticoagulant and/or as a supplement to existing chemotherapies and anticoagulant therapies. View Full-Text
Keywords: cancer-associated thrombosis; complementary medicine; inflammation, natural supplement; thrombosis; thymoquinone cancer-associated thrombosis; complementary medicine; inflammation, natural supplement; thrombosis; thymoquinone
►▼ Show Figures 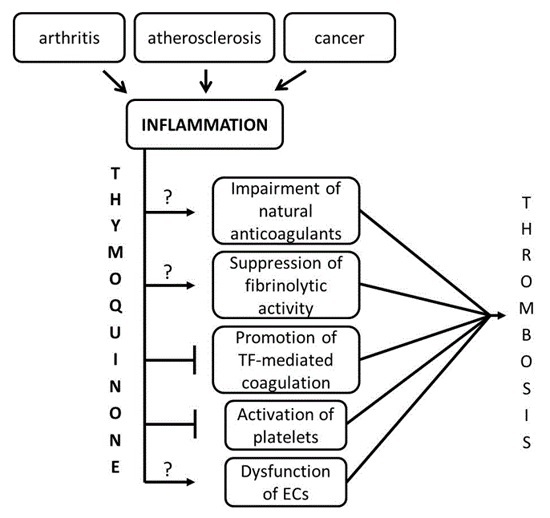