Immunoglobulin tau (IgT) is a new teleost immunoglobulin isotype, and its potential function in adaptive immunity is not very clear. In the present study, the membrane-bound and secreted IgT (mIgT and sIgT) heavy chain genes were cloned for the first time and characterized in flounder (Paralichthys olivaceus), and found the nucleic acid sequence were exactly same in the Cτ1–Cτ4 constant domains of mIgT and sIgT, but different in variable regions and the C-terminus. The amino acid sequence of mIgT shared higher similarity with Bovichtus diacanthus (51.2%) and Dicentrarchus labrax (45.0%). Amino acid of flounder IgT, IgM, and IgD heavy chain was compared and the highest similarity was found between IgT Cτ1 and IgM Cμ1 (38%). In healthy flounder, the transcript levels of IgT mRNA were the highest in gill, spleen, and liver, and higher in peripheral blood leucocytes, skin, and hindgut. After infection and vaccination with Edwardsiella tarda via intraperitoneal injection and immersion, the qRT-PCR analysis demonstrated that the IgT mRNA level was significantly upregulated in all tested tissues, with similar dynamic tendency that increased firstly and then decreased, and higher in gill, skin, hindgut, liver, and stomach in immersion than in the injection group, but no significant difference existed in spleen and head kidney between immersion and injection groups. These results revealed that IgT responses could be simultaneously induced in both mucosal and systemic tissues after infection/vaccination via injection and immersion route, but IgT might play a more important role in mucosal immunity than in systemic immunity. View Full-Text
Keywords: tau immunoglobulin (IgT); flounder (Paralichthys olivaceus); gene cloning; expression dynamic; mucosal immunity tau immunoglobulin (IgT); flounder (Paralichthys olivaceus); gene cloning; expression dynamic; mucosal immunity
►▼ Show Figures 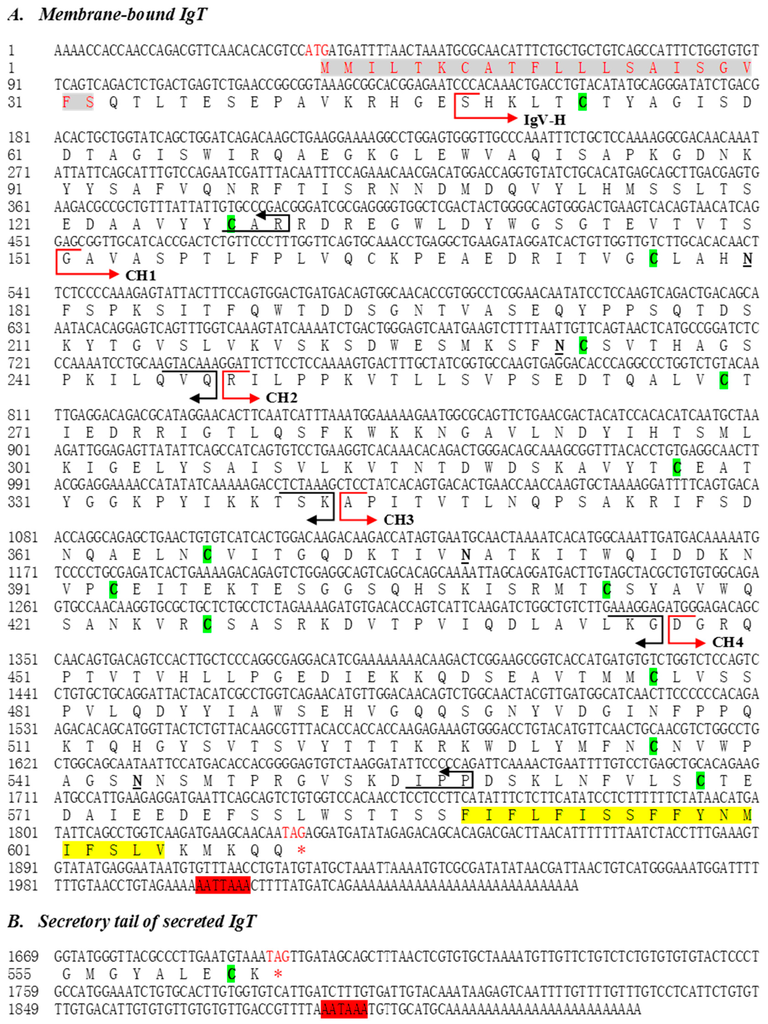