Behind Resveratrol Stabilization by Carboxymethylated (1,3/1,6)-β-d-Glucan: Does the Polyphenol Play a Role in Polymer Structural Organization?
Previous Article in Journal

d-Glucose, guanidine hydrochloride, urea, tris(2-carboxyethylphosphine (TCEP), acrylamide (Sigma, St. Louis, MO, USA), and fluorescent label BADAN (AnaSpec, Fremont, CA, USA) were used without further purification. To determine the GdnHCl concentration, we relied on the measurement of the refraction coefficient using the Abbe refractometer (LOMO, St. Petersburg, Russia).
E. coli strain K-12 (F+mgl503lacZlacY+recA1) carrying an mglB gene deletion [59,102] and transformed with a pTz18u-mglB vector was primarily used for obtaining the wtGGBP. Upon induction with d-fructose [103], the expression efficiency of the GGBP protein was rather low: the recombinant protein yield in this system did not exceed 5–8 mg/L of culture. Therefore, to increase the expression levels, the nucleotide sequence of the mglB gene was optimized and the gene was recloned into a pET-11d plasmid with the T7 promoter (Stratagene, La Jolla, CA, USA) using the Nco I-BamH I and Bgl II restriction sites. Specific forward and reverse primers were used to insert new restriction sites and a polyhistidine tag at the C-terminal of the gene. Site-directed mutagenesis was performed with a Quik-Change mutagenesis kit (Stratagene, La Jolla, CA, USA) using primers encoded for the corresponding amino acid substitutions. Plasmids were isolated from bacterial cells using plasmid DNA isolation kits (Omnix, St. Petersburg, Russia). Primer purification was performed by either reverse-phase chromatography or electrophoresis in a polyacrylamide gel.
pET-11d plasmids encoding for the wtGGBP and GGBP/H152C mutant were used to transform E. coli BL21(DE3) cells. The expression of the proteins was then induced by adding 0.5 mM isopropyl-beta-d-1-thiogalactopyranoside (IPTG; Nacalai Tesque, Kyoto, Japan). Bacterial cells were cultured for 24 h at 37 °C. Recombinant proteins were purified using Ni++-agarose packed in His-GraviTrap columns (GE Healthcare, Chicago, IL, USA). Protein purification was controlled using denaturing SDS-electrophoresis in 15% polyacrylamide gel [104].
The labeling of GGBP/H152C with the fluorescent dye BADAN was performed as described by Khan [49] with a slight modification. To label proteins with BADAN, a 100-fold excess of TCEP was added in solution, and a 10-fold excess of dye was added to the obtained mixture. The resulting reaction mixture was incubated overnight at 4 °C. The unbound dye was removed by filtration along with an extensive dialysis against a sodium phosphate buffer.
The experiments were performed in protein solutions with concentration of 0.2 mg/mL. For the formation of the protein-ligand complex, 0.05 μM–20mM of d-glucose was added to the protein solution. All measurements were conducted in the sodium phosphate buffer, pH 7.4. All experiments were performed at 23 °C.

The fluorescence experiments were carried out using a Cary Eclipse (Agilent, Santa Clara, CA, USA) spectrofluorimeter. The measurements were made at 23 °C using 10 × 10 mm cells (Starna, Atascadero, CA, USA, USA). The fluorescence intensity of BADAN and tryptophan residues was corrected for the primary inner filter effect [105]:where W is factor which corrects measured total fluorescence intensity for the so-called primary inner filter effect, and F(λex) is a total fluorescence intensity.
Because the fluorescence measurements were performed using the Cary Eclipse spectrofluorimeter with horizontal slits, the value of correction factor W was calculated based on the following ratio:where AΣ is the total absorbance of exciting light in the solution. Absorption spectra were registered using a U-3900H (Hitachi, Tokyo, Japan) spectrophotometer. Earlier [105], it was shown that the value of the total fluorescence intensity corrected in such a manner is proportional to the product of the absorbance AFL to the quantum yield of fluorescence q, when one fluorescent substance is in present solution.
The excitation wavelength for the intrinsic protein fluorescence was 297 nm, whereas the emission wavelengths for detecting the intrinsic protein fluorescence ranged from 300 to 450 nm. The dye fluorescence was excited at 387 nm. The emission wavelength for the BADAN fluorescence was ranged from 400 to 650 nm.
Fluorescence anisotropy was determined as:where and are vertical and horizontal components of fluorescence intensity excited by vertical polarized light, and is the coefficient that determines the different sensitivity of the registering system for the vertical and horizontal components of the fluorescence light.
The fluorescence intensity of the protein solution in the presence of ligand (assuming that there are two forms of a protein in solution) can be determined by the following equation:where FF and FB are the protein fluorescence intensity in free state and in a ligand-bound form, respectively, and αF(C0) and αB(C0) are the relative fractions of the corresponding protein states in the solution at a concentration of added ligand C0, αF(C0) + αB(C0) = 1. Thus, the fraction of bound protein is determined as:where Cp is the total protein concentration and Cb is the concentration of protein bound to ligand. The dissociation constant, Kd, can be expressed as follows:where Cf is the concentration of the free ligand, which can be calculated from the equation:
Eliminating Cf from Equation (6), we can obtain the following expression for Cb:
Combining Equations (5) and (8), the equation for the definition of Kd can be derived using the difference in fluorescence intensity of a protein in the presence or absence of glucose:
The approximation of experimental data was performed via the nonlinear regression method using the Sigma Plot program.

Time-resolved fluorescence measurements were carried out by a time-correlated single-photon counting approach using the Fluotime 300 (Pico Quant, Berlin, Germany) spectrometer with the Laser Diode Head LDH-375 (λex = 375 nm).
The fluorescence anisotropy decay was obtained using Equation (3) and recording and at magic angle conditions. The G coefficient for Fluotime 300 was calculated for every measurement and was approximately equal to 1. The anisotropy decays were fit using the two component approximation:where ri is the anisotropy of ith component, and φi is the rotation correlation time of the ith component. According to this approximation, a decrease in the fluorescence anisotropy of BADAN linked to GGBP/H152C represents a sum of “slow” and “fast” motions of this dye [106]. The “slow” motion corresponds to the rotation of a protein as a whole with the rotation relaxation time τslow = 3 ϕslow, whereas the “fast” motion corresponds to the rotation of a dye with the rotation relaxation time τfast = 3 ϕfast. The anisotropy profiles allow the calculation of the mean amplitude of the dye motions, θ, within the free oscillation model of a fluorophore in a discrete potential hole with a width of θ as follows [107,108]:where .
The convolution of the model exponential function with the instrument response function (IRF) was compared to the experimental data until a satisfactory fit was obtained. The IRF was measured using the cross correlation of the excitation and fundamental gate pulse. The FluoFit software (Pico Quant, Berlin, Germany, version 4.6.6) was used for the analysis of the decay curves.

3.2.3. The Dynamic Quenching of the Intrinsic UV Fluorescence

The kinetics of glucose binding to GGBP/H152C-BADAN in a timeframe from 0 to 0.04 s was measured using the MOS450spectrometerequipped with the stopped-flow mixing module SFM-4 (Bio-Logic, Seyssinet-Pariset, France). The excitation wavelength was 387 nm, the dye fluorescence signal was filtered by cut-off filter at 405 nm. The PMT voltage was 900 V. In all experiments, an FC-15 cuvette with a path length of 1.5 mm was used; the total flow rate was 14 mL/s, and the dead time of apparatus was 3 ms. The final concentrations after mixing were 0.6 μM for GGBP/H152C-BADAN and 0.5 mM for glucose in a corresponding buffer (sodium phosphate buffer or 0.1 M GdnHCl in sodium phosphate buffer). All the kinetic experiments were repeated 30–40 times to decrease the ratio of noise to useful signal. The temperature of the syringes, mixers, flow cell, and the connecting lines was maintained constant at 23 °C with a circulating bath. The analysis of the kinetics data was carried out by Bio-Kine software (Bio-Logic) according to the conformational selection model. This model assumes that only the semi-closed apo-form of GGBP/H152C can interact with glucose:where E is the GGBP/H152C open apo-form, E* is the GGBP/H152C semi-closed apo-form, L is the glucose, and EL is the complex of GGBP/H152C with glucose. In this case, the observed kinetic curve is characterized by a bi-exponential function with constants [89]:
Assuming that [E*] << [L], the relation (14) takes the following forms [89]:

The parameters of the binding of mutant GGBP/H152C and wtGGBP with glucose in buffer, GdnHCl, and urea solutions were determined using the isothermal titration calorimeter TA Nano ITC (TA Instruments, New Castle, DE, USA) at the Resource Center of the Thermogravimetric and Calorimetric Research (Research Park of St. Petersburg State University). Protein concentration was 35 μM in the final sample volume of 1 mL. The reference cell was filled with corresponding buffer (sodium phosphate buffer or 0.1 M GdnHCl in sodium phosphate buffer). Twenty injections (4.91 μL each) of 0.25 mM glucose for the wtGGBP and 0.7 mM glucose for GGBP/H152C in the corresponding buffer were carried out during every experiment. The interval between injections was 300 s for baseline stabilization. The stirring speed was constant and equal to 300 rpm. The results for the first injection were discarded due to the diffusion in the tip of the syringe during baseline stabilization. The titration of buffer by buffer was carried out for checking the thermostatic control of the cell and syringe. It was established that during such titration, heat effects larger than noise levels were not observed, confirming the temperature equality of titrant and analyte. The analysis of the ITC data was performed by NanoAnalyse software (TA Instruments) using an independent binding model based on the Wiseman isotherm [109,110,111]:where Q is the total heat content of solution, V0 is the volume of calorimeter cell, ∆H is the change of enthalpy of binding, n is the number of binding sites per macromolecule, Kd is the dissociation constant, and [X]t and [M]t are the total concentration of ligand and macromolecule in calorimeter cell, which are equal to where [X]0 and [M]0 are the initial concentration of ligand and macromolecule, and v is the injection volume.

The authors are thankful to Alexey Uversky for careful reading and editing of this manuscript. The ITC experiments were carried out using the equipment of the Resource Center of Thermogravimetric and Calorimetric Research (Research Park of St. Petersburg State University). This work was supported in part by a grant from the Program of the Russian Academy of Sciences “Molecular and Cell Biology” (KKT) and the Russian Federation President Fellowship SP-1725.2015.4 (AVF). 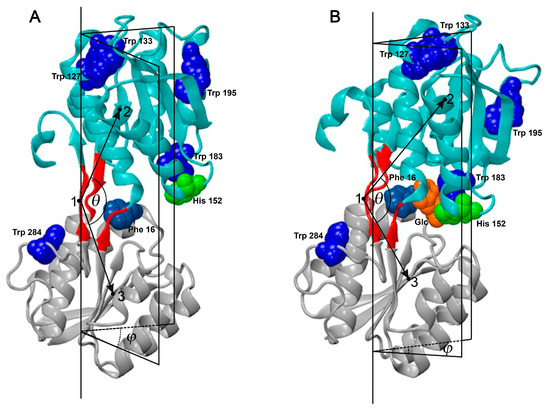 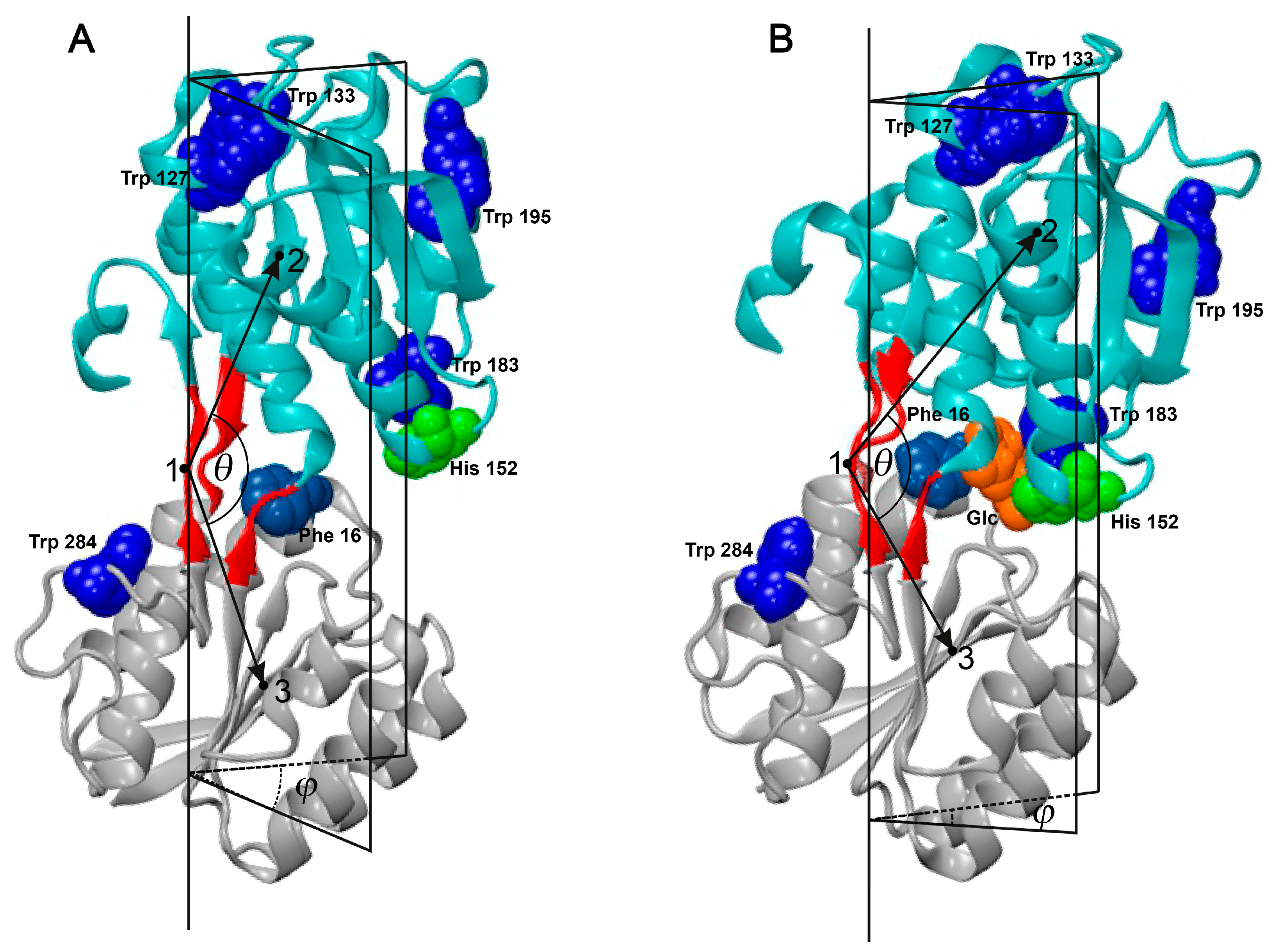 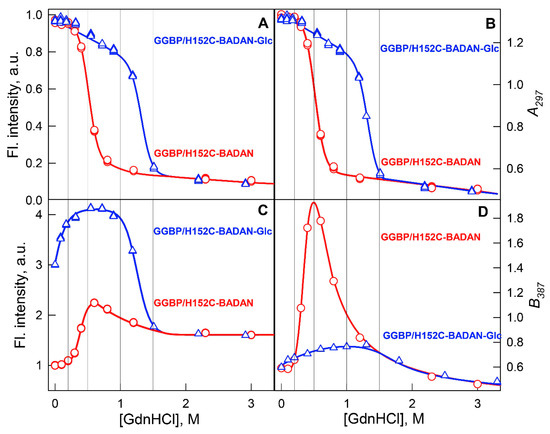 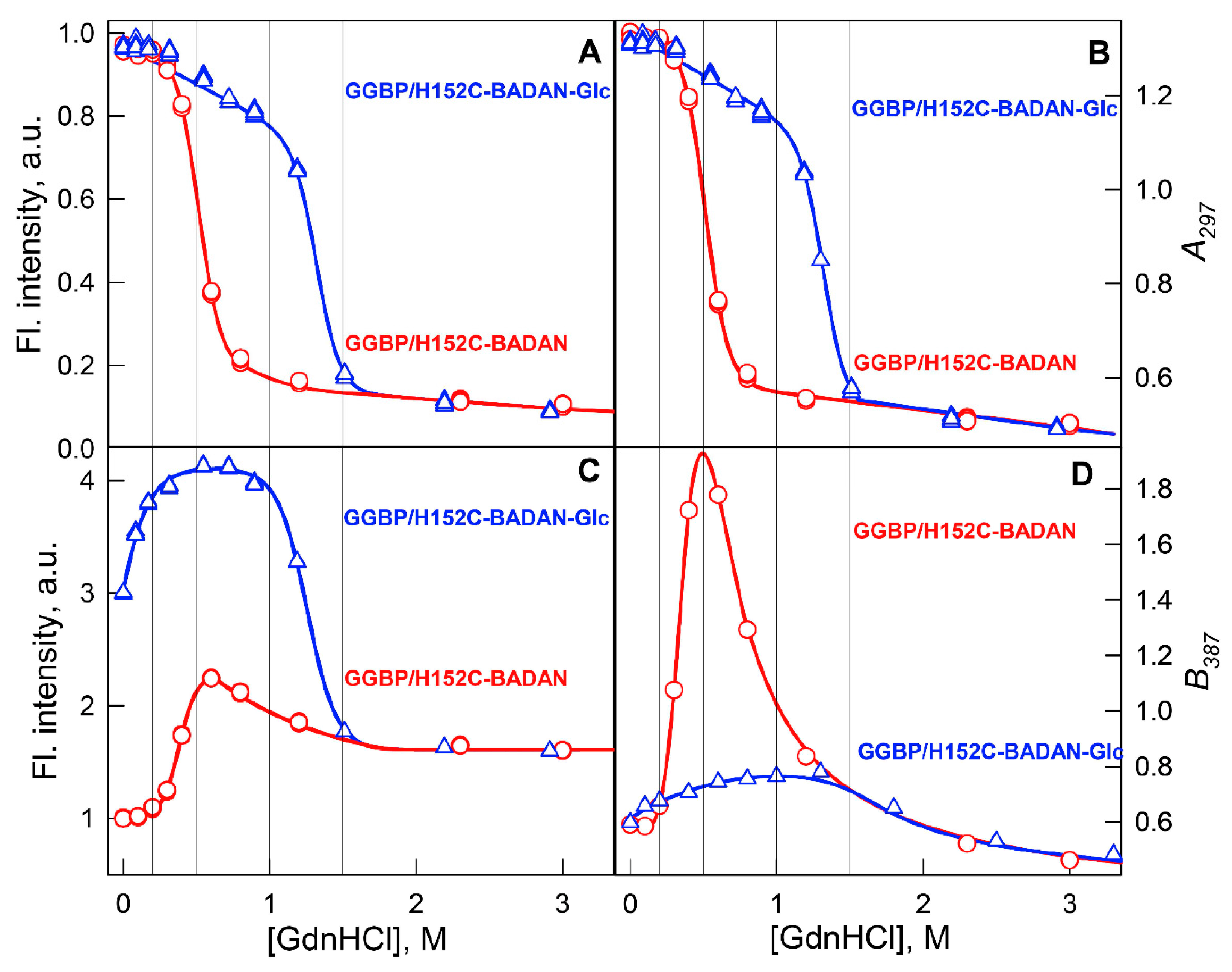 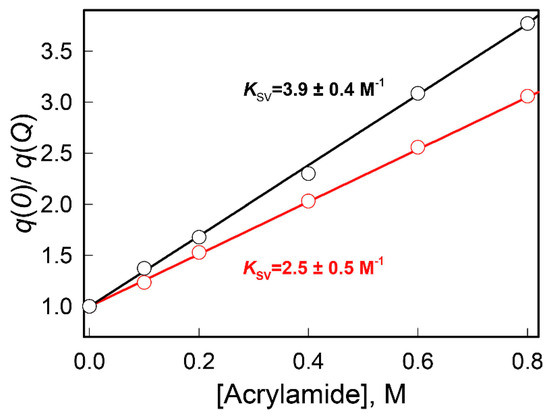 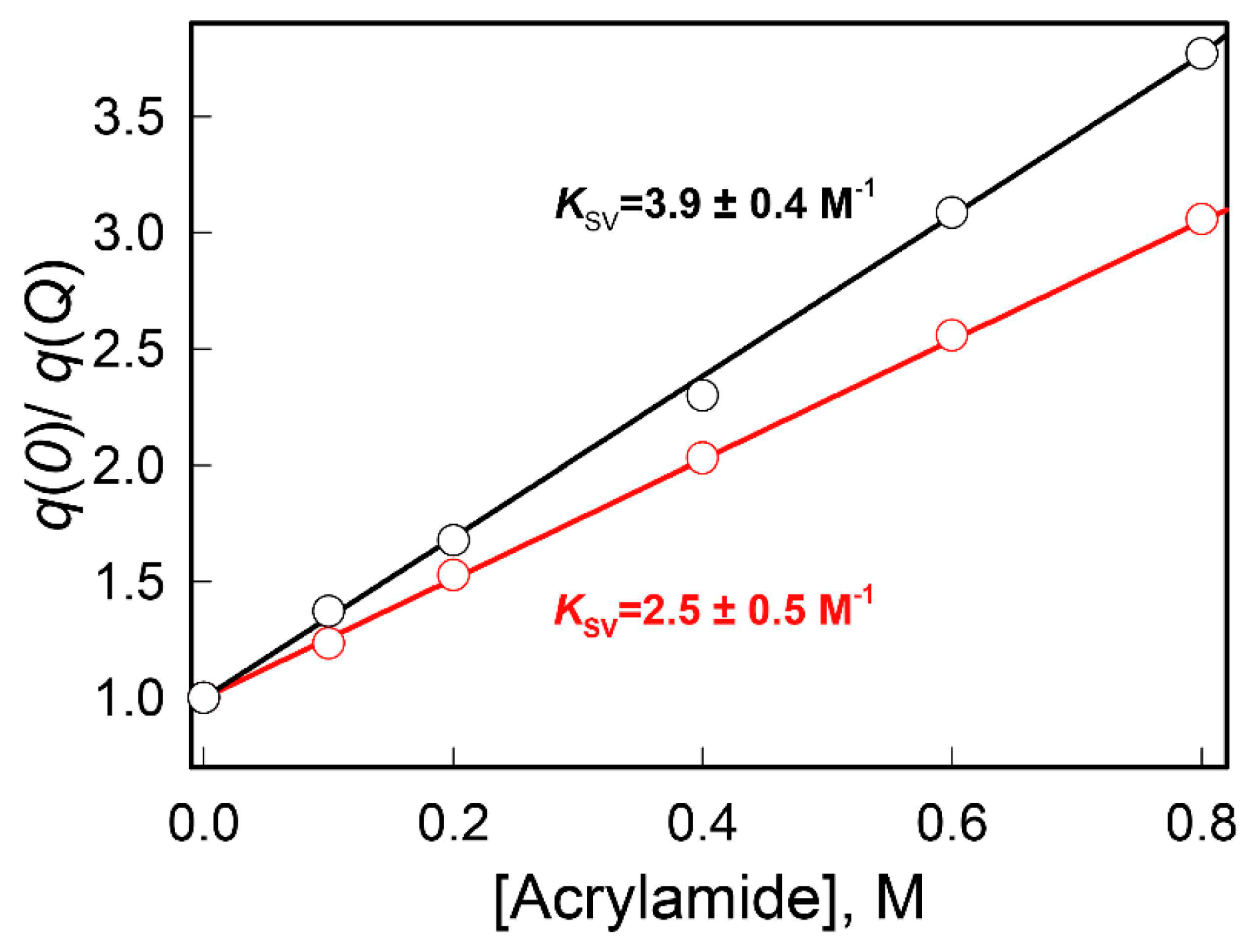 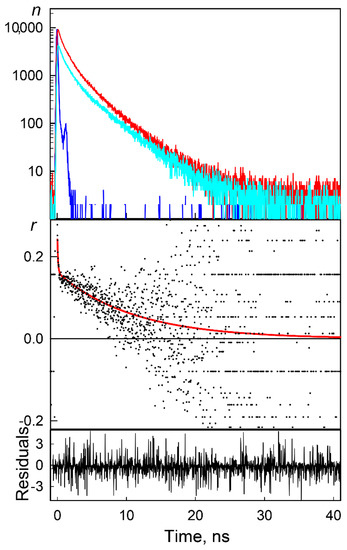 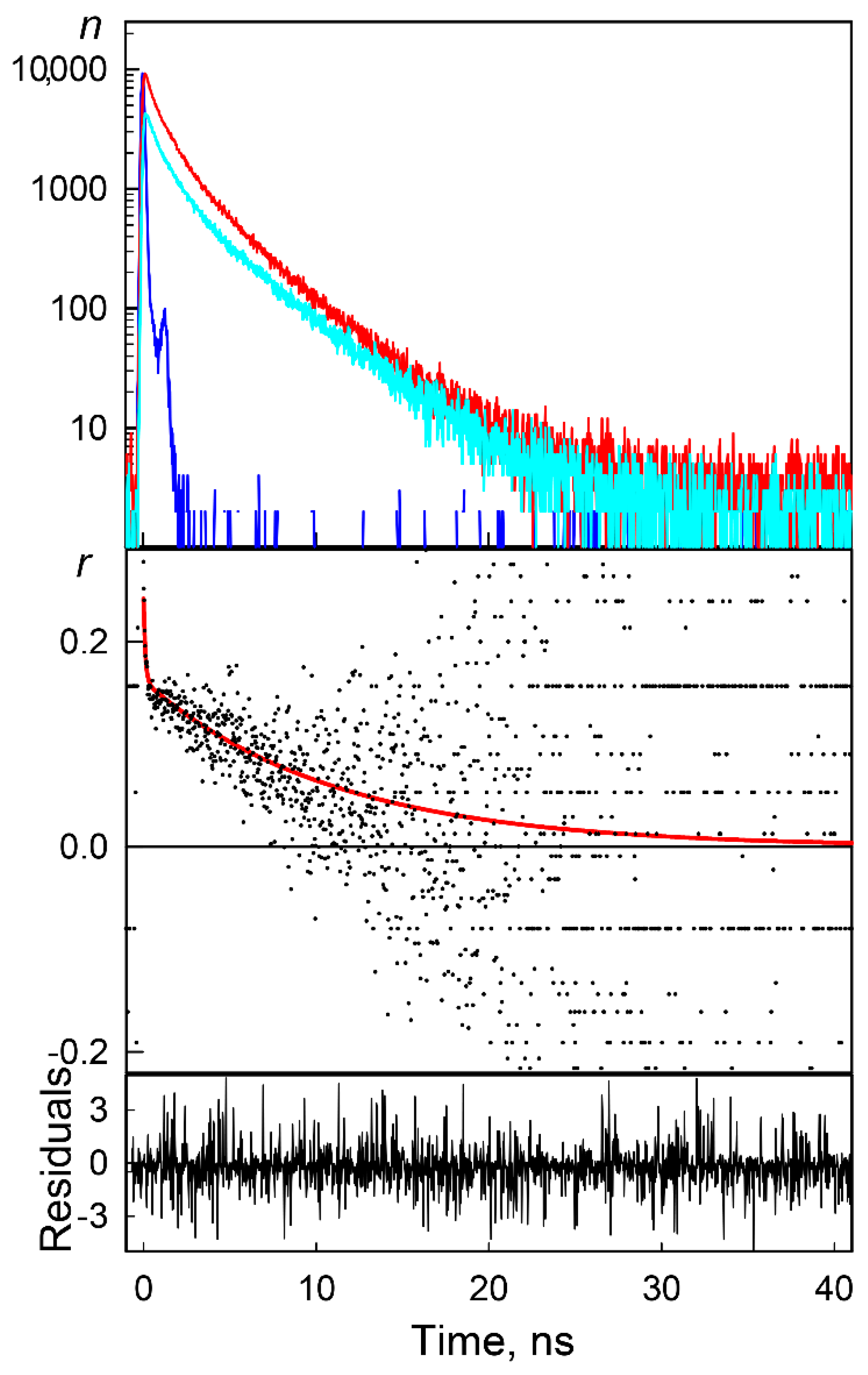 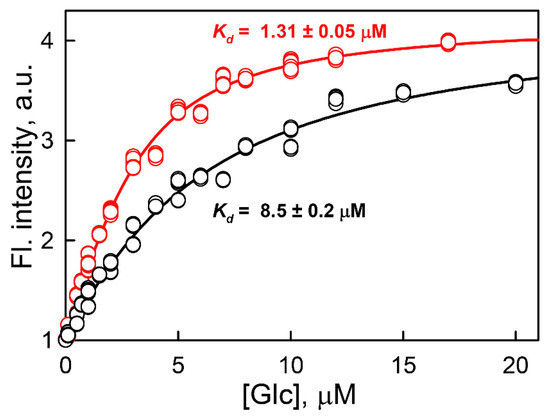 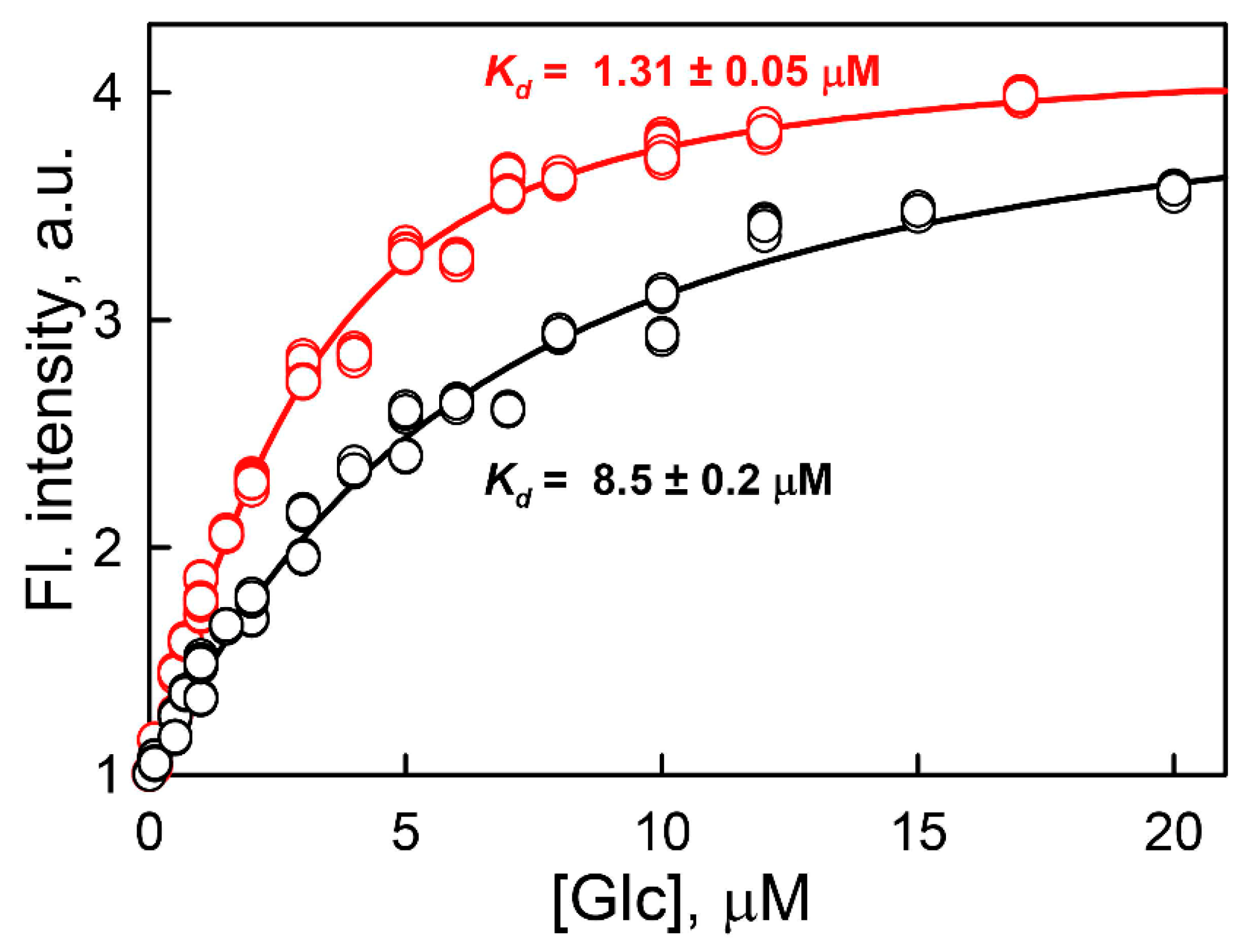 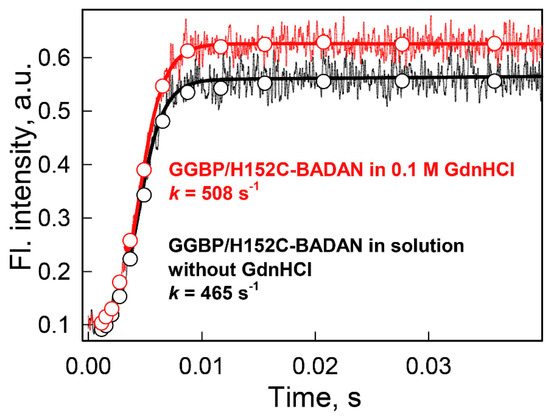 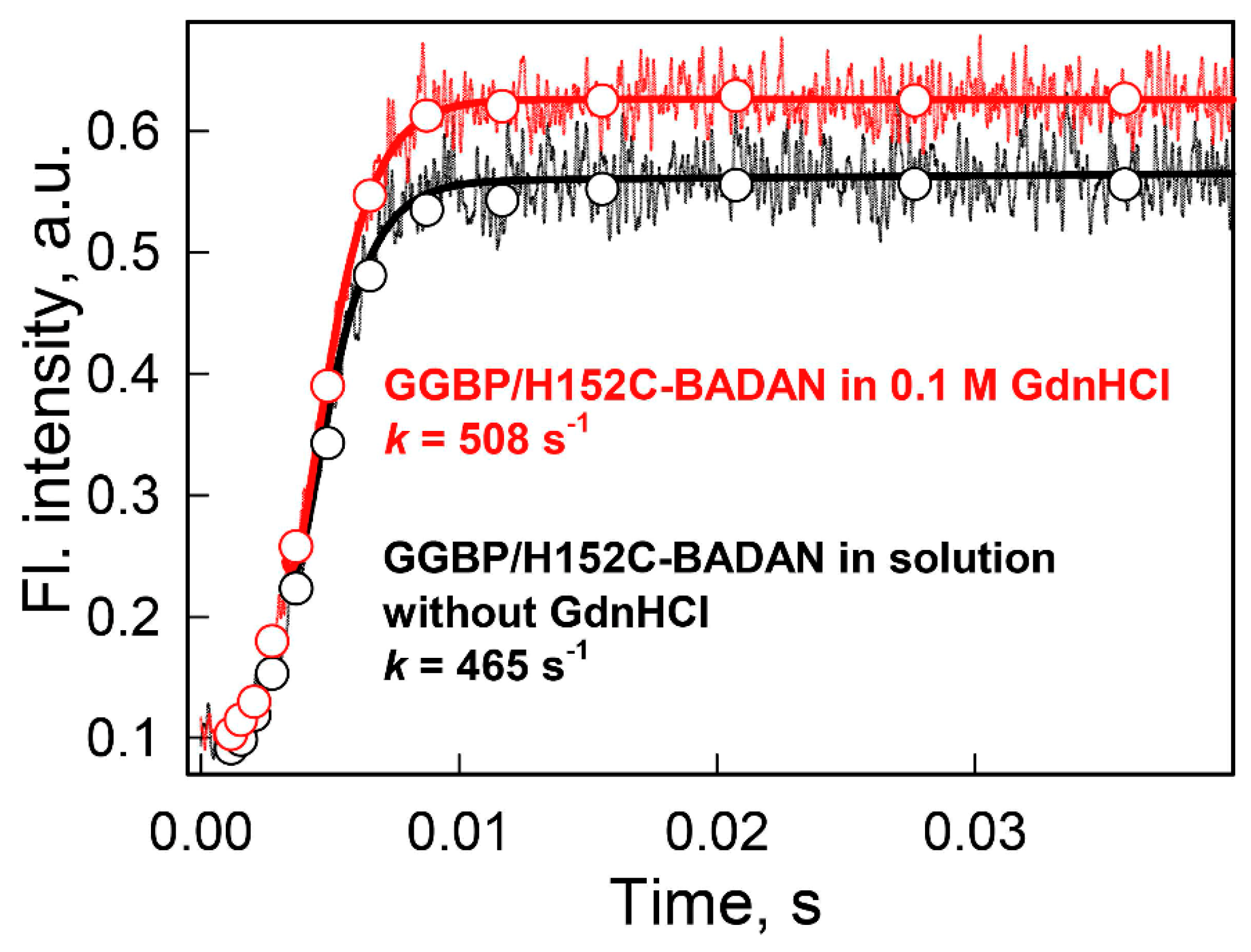