Characterization of Effectiveness in Concerted Ih Inhibition and IK(Ca) Stimulation by Pterostilbene (Trans-3,5-dimethoxy-4′-hydroxystilbene), a Stilbenoid

Pterostilbene (PTER), a natural dimethylated analog of resveratrol, has been demonstrated to produce anti-neoplastic or neuroprotective actions. However, how and whether this compound can entail any perturbations on ionic currents in electrically excitable cells remains unknown. In whole-cell current recordings, addition of PTER decreased the amplitude of macroscopic Ih during long-lasting hyperpolarization in GH3 cells in a concentration-dependent manner, with an effective IC50 value of 0.84 μM. Its presence also shifted the activation curve of Ih along the voltage axis to a more hyperpolarized potential, by 11 mV. PTER at a concentration greater than 10 μM could also suppress l-type Ca2+ and transient outward K+ currents in GH3 cells. With the addition of PTER, IK(Ca) amplitude was increased, with an EC50 value of 2.23 μM. This increase in IK(Ca) amplitude was attenuated by further addition of verruculogen, but not by tolbutamide or TRAM-39. Neither atropine nor nicotine, in the continued presence of PTER, modified the PTER-stimulated IK(Ca). PTER (10 μM) slightly suppressed the amplitude of l-type Ca2+ current and transient outward K+ current. The presence of PTER (3 μM) was also effective at increasing the open-state probability of large-conductance Ca2+-activated K+ (BKCa) channels identified in hippocampal mHippoE-14 neurons; however, its inability to alter single-channel conductance was detected. Our study highlights evidence to show that PTER has the propensity to perturb ionic currents (e.g., Ih and IK(Ca)), thereby influencing the functional activities of neurons, and neuroendocrine or endocrine cells. View Full-Text
Keywords: Pterostilbene (trans-3,5-dimethoxy-4′-hydroxystilbene); hyperpolarization-activated cation current; Ca2+-activated K+ current; large-conductance Ca2+-activated K+ channel; pituitary cell; hippocampal neuron Pterostilbene (trans-3,5-dimethoxy-4′-hydroxystilbene); hyperpolarization-activated cation current; Ca2+-activated K+ current; large-conductance Ca2+-activated K+ channel; pituitary cell; hippocampal neuron
►▼ Show Figures 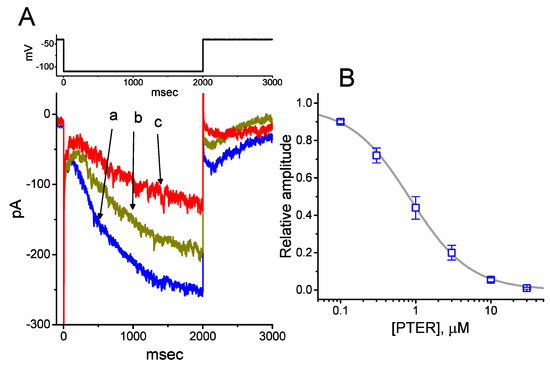