EIF4G1 and RAN as Possible Drivers for Malignant Pleural Mesothelioma

For malignant pleural mesothelioma (MPM) novel therapeutic strategies are urgently needed. In a previous study, we identified 51 putative cancer genes over-expressed in MPM tissues and cell lines. Here, we deepened the study on nine of them (ASS1, EIF4G1, GALNT7, GLUT1, IGF2BP3 (IMP3), ITGA4, RAN, SOD1, and THBS2) to ascertain whether they are truly mesothelial cancer driver genes (CDGs) or genes overexpressed in an adaptive response to the tumoral progression (“passenger genes”). Through a fast siRNA-based screening, we evaluated the consequences of gene depletion on migration, proliferation, colony formation capabilities, and caspase activities of four MPM (Mero-14, Mero-25, IST-Mes2, and NCI-H28) and one SV40-immortalized mesothelial cell line (MeT-5A) as a non-malignant model. The depletion of EIF4G1 and RAN significantly reduced cell proliferation and colony formation and increased caspase activity. In particular, the findings for RAN resemble those observed for other types of cancer. Thus, we evaluated the in vitro effects of importazole (IPZ), a small molecule inhibitor of the interaction between RAN and importin-β. We showed that IPZ could have effects similar to those observed following RAN gene silencing. We also found that primary cell lines from one out of three MPM patients were sensitive to IPZ. As EIF4G1 and RAN deserve further investigation with additional in vitro and in vivo studies, they emerged as promising CDGs, suggesting that their upregulation could play a role in mesothelial tumorigenesis and aggressiveness. Furthermore, present data propose the molecular pathways dependent on RAN as a putative pharmacological target for MPM patients in the view of a future personalized medicine. View Full-Text
Keywords: cancer driving gene; EIF4G1; MPM; RAN; siRNA; importazole cancer driving gene; EIF4G1; MPM; RAN; siRNA; importazole
►▼ Show Figures 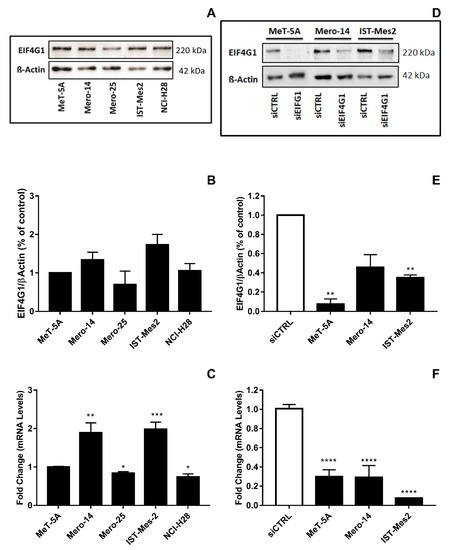